Crowds once again flocking to county fairs across Minnesota 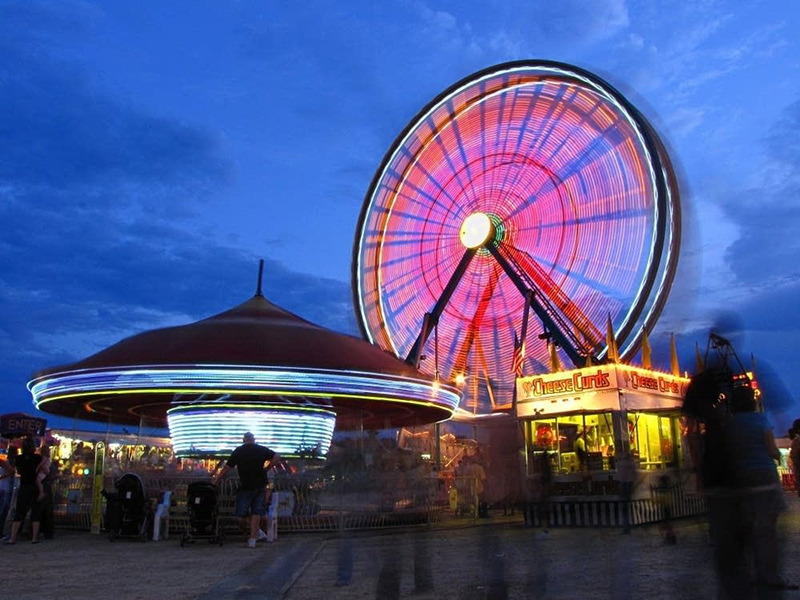 A view of the midway at the Olmsted County Fair in Rochester in 2010. County fairs all across Minnesota are hosting crowds again this year, after the pandemic forced most to cancel events in 2020. Chad Johnson/MPR News 2010

It’s the heart of county fair season across Minnesota. For the first time in two years, people are lining up for midway rides, filling barns to look at animals and 4-H exhibits and eating heaps of corn dogs and funnel cakes.

It’s very clear that Minnesotans are hungry to get back to county fair traditions.

Kirk Peysar looked out with glee at the long lines of Aitkin County Fairgoers waiting to buy malts and cheese curds earlier this month — a sight that all but vanished last summer amid the pandemic.

“You could just tell that people were longing to be part of a crowd,” he said.

Peysar is an organizer of the Aitkin County Fair. He said he was pleased with the turnout at this month’s fair — a larger crowd than usual.

“It’s just kind of that reassurance or that sign that, you know, people value fairs,” he said, “and they really turned out in support at the fair and we are thankful for that.”

This past weekend saw fairs from Dodge and Waseca counties in the south to Lake of the Woods County in the north.

Coming up this week: More than half a dozen other county fairs including in Blue Earth, Wright, Chisago and Otter Tail.

And the Rice County Fair, too, in Faribault, where organizer John Dvorak is also expecting good attendance. He said it’s been a challenge to organize fairs this year because of pandemic uncertainty and the small window they had to lock in vendors, sponsors and businesses.

“I mean, how do you go up to a business and say ‘Well, can you sponsor this event at the fair — but, you know what, we might not have a fair, but we might have a fair?’ I mean there was really no certainty yet” when organizing started, he said.

In central Minnesota, the Stearns County Fair is scheduled for the end of this month, and organizer Jackie Spoden-Bolz said people are eager to get back on the fairgrounds.

“People are, you know, keep coming to me, they’re so glad there’s a fair,” she said. “People just want to get out I think and [get] more back to normal as much as they can.”

The county fairs taking place all across Minnesota lead up to the return of the Minnesota State Fair that opens Aug. 26.

The hope is that with those precautions in place, the only thing fairgoers will have to worry about is finding the next great thing to eat.