Don Purdie, 86, of Glenville, MN, passed away on Friday, July,  2nd, 2021 at St. Louis Park Estates in St. Louis Park, MN. A memorial service will be held at 10:00 on Saturday, July, 17, 2021 at Bayview/Freeborn Funeral Home with Rev. Don Malinsky  presiding. Visitation will be one hour prior to the service. (Online  condolences are welcome at www.bayviewfuneral.com).  Internment will be at Bass Lake Cemetery, Delevan, MN at a later  date. 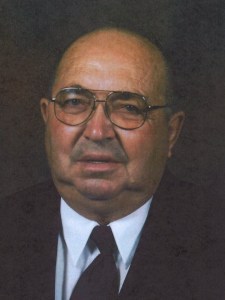 Don was born September 3, 1934, the son of Kenneth and Melva  (Sharp) Purdie near Winnebago, MN. He graduated from  Winnebago High School in 1953 and joined the Army. Don  returned to Winnebago and on June 8, 1957, married Gloria  Abbas at the Delavan Methodist Church in Delavan MN. During  their marriage they lived in several towns in MN and settled in  Glenville in 1971.

Don was an extremely hard worker and was always very  dedicated to his employers including digging wells, a milkman  delivering for Land O’Lakes, Polly Meadows, and was owner  operator of his own truck. When they moved to Glenville, he  worked at the Albert Lea Standard Truck Stop, Thermo King of  Albert Lea and eventually retired from Crossroads Trailer. Don  was also involved in the community serving with the Glenville  Volunteer Fire Department from 1974-1994, he helped with the  development of the Glenville City Beach and the Softball field,  was a member of the ELKS Lodge, The Glenville Snowmobile  Club and always enjoyed going to the Stables Supper Club.

Don enjoyed and was an avid gardener all of his life, and  retirement afforded him the opportunity to expand on that, he was  always looking for new and interesting varieties to try beside all of  the staple items. Don and Gloria enjoyed traveling and  sightseeing any time they could, enjoying their timeshares, and  taking family trips when they could. The family gatherings were  marked by the annual Easter egg hunt and dirty bingo at  Christmas, always including a great home cooked meal.

Don was preceded in death by his son LonDell Purdie in 1985,  and grandson Trevor Purdie in 1989; his parents; father and  mother-in-law: Hillard and Freeda Abbas; Brother Eldon Purdie,  and sisters, Lucille Purdie and Leila Berger; and numerous  brother and sister-in-laws, aunts, uncles, nieces, nephews and  cousins.