Gallery: Residents come out to show support for Marion Ross as statue is unveiled downtown 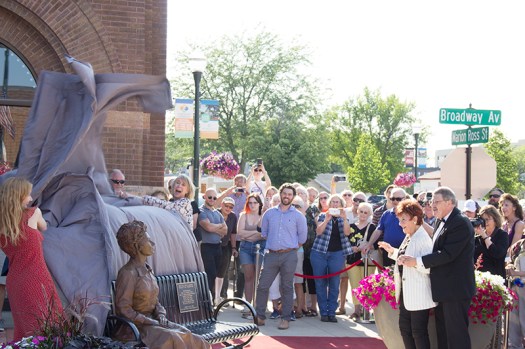 Marion Ross's son, Jim Meskenen, and his family tear back the tarp covering the statue as Ross looks on with Glen Parsons. Abigail Chalmers/Albert Lea Tribune 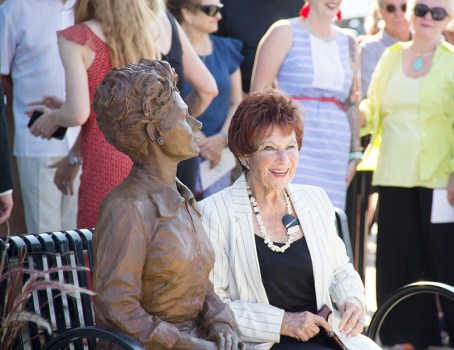 "Happy Days" actress Marion Ross smiles as she sits next to a statue of herself as Mrs. Cunningham from the popular television show after the statue was unveiled in July in a ceremony in downtown Albert Lea. Several hundred people attended the event to honor Ross, who calls Albert Lea her hometown. Abigail Chalmers/Albert Lea Tribune 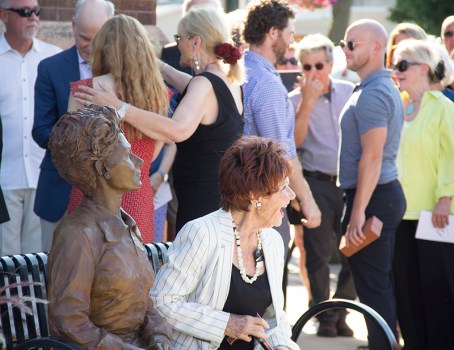 Ross smiles as she sits next to her statue. Shortly after, she posed for pictures with community members who attended the unveiling ceremony. Abigail Chalmers/Albert Lea Tribune 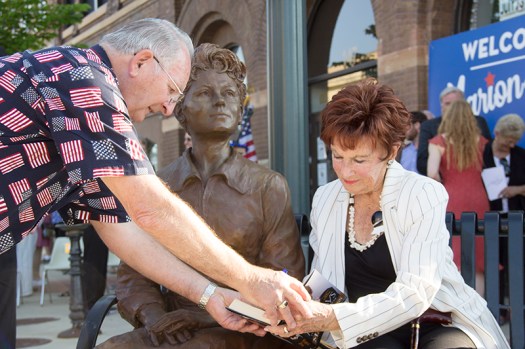 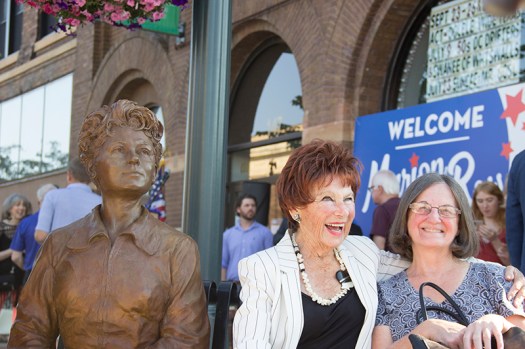 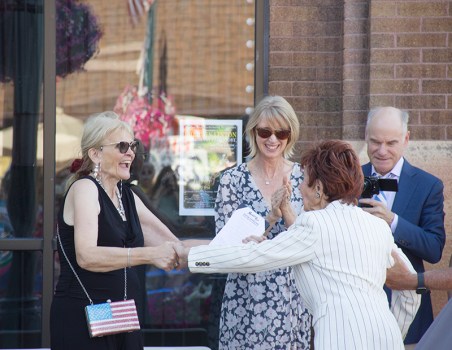 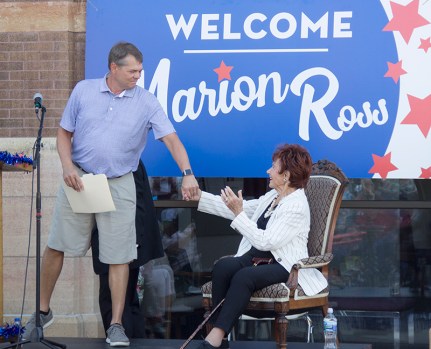 Mayor Vern Rasmussen welcomes Marion Ross Friday evening during a ceremony in front of the Marion Ross Performing Arts Center. Rasmussen delivered a speech at the beginning of the ceremony and declared it Marion Ross Dady. Abigail Chalmers/Albert Lea Tribune 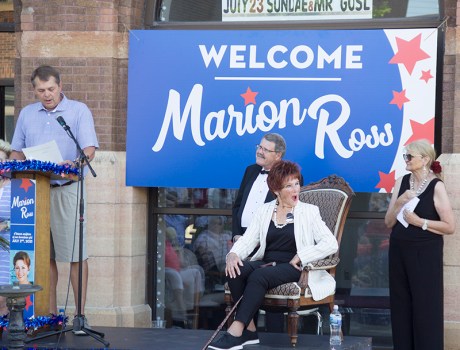 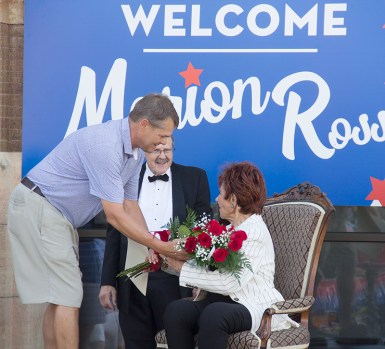 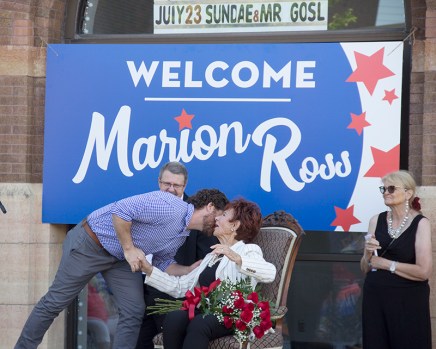 The sculptor of the statue, Chad Fisher, embraces Ross. Fisher was one of the many to give a speech during the celebration. Abigail Chalmers/Albert Lea Tribune 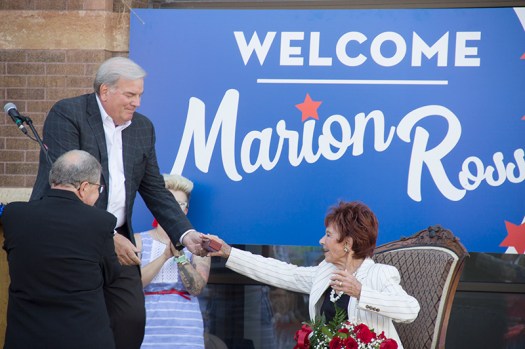 Kyle Carpenter, CEO of the MacPhail Center for Music in Minneapolis, presents Ross with the Maestro Award. The award is reserved for MacPhail's most distinguished alumni. Abigail Chalmers/Albert Lea Tribune 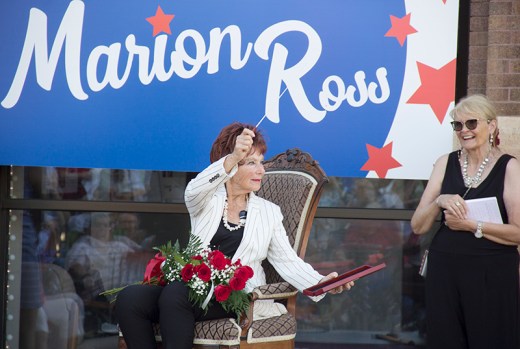 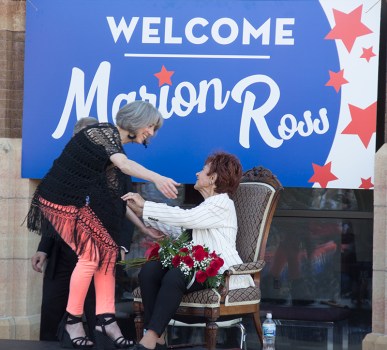 Sue Scott greets Ross Friday evening during the ceremony. Scott, along with Ron Peluso, shared fond memories of Ross with the crowd before the statue unveiling. Abigail Chalmers/Albert Lea Tribune 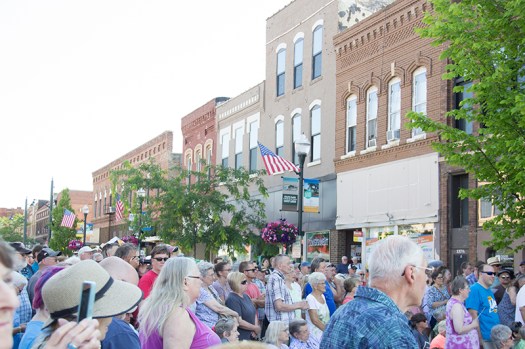 Onlookers listened as several community members and special guests spoke about the process of fundraising and creating the statue. Abigail Chalmers/Albert Lea Tribune 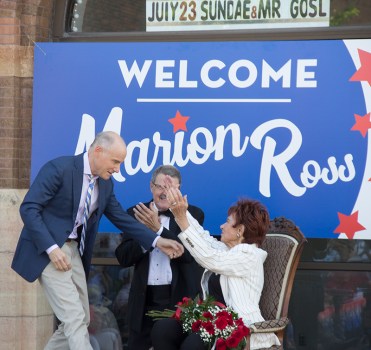 Jim Meskenen, Ross's son, reaches out to embrace his mother. Meskenen was the final speaker of the night. Abigail Chalmers/Albert Lea Tribune 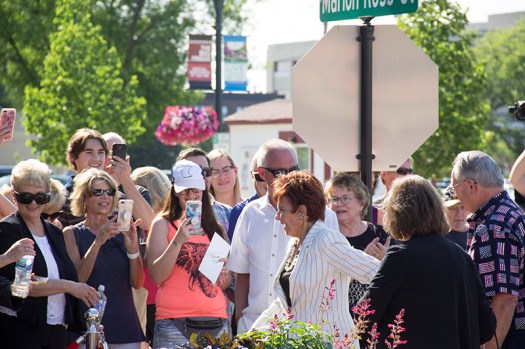 Albert Lea’s sweetheart will forever be remembered with the installation of a new bronze statue in her honor on Broadway.

Several hundred people gathered at the popular downtown intersection in front of the Marion Ross Performing Arts Center Friday evening to meet “Happy Days” actress Marion Ross and see the statue unveiled in a ceremony with speakers who had been impacted by Ross throughout the years.

Those who spoke commented not only on Ross’s success as an actress but also on the impact she has made as a person with goodness, ambition and courage.

“I’m touched beyond words that you’re all here. …” Ross said. “I’m so proud to come from Albert Lea.”

The statue was made possible thanks to a two-year fundraising effort by local residents who wanted to honor Ross, who lived in Albert Lea in her youth and moved to Minneapolis to pursue her dreams at the MacPhail Center for Music when she was 15. She was later signed by Paramount and has played in numerous roles in the years since, her most prominent as Mrs. Cunningham on “Happy Days.”

Glen Parsons, chairman of the committee, said when he thinks back about the process to bring the statue to fruition, the effort started with a simple idea and then the committee sought out to raise money to make that idea a reality.

After the fundraising started, the effort was halted with the COVID-19 pandemic. Through persistence, however, he said, the committee ultimately reached its goal and raised $100,000 — money of which almost all came from private donations, including Ross’s co-stars on the popular television show.

The committee hired Chad Fisher of Fisher Sculptures in Dillsburg, Pennsylvania, to complete the sculpture, who said it was an honor to work on the sculpture and to get to know Ross.

Fisher said he spoke with her over Zoom and on the phone and tracked down over 300 photos to study as he created the statue.

As a father of four children, he said Ross was an inspiration to him, and he thanked her for her art and her achievements.

“I’m extremely grateful to have this opportunity to thank her in a way that she should be thanked — praised — and this is a wonderful tribute for you,” he said during the ceremony.

Kyle Carpenter, CEO of the MacPhail Center for Music, who was born in Albert Lea, presented Ross with the Maestro Award from MacPhail — a replica of Lawrence Welk’s baton — which honors its most distinguished alumni.

Sue Scott, who worked alongside Garrison Keillor in “Prairie Home Companion,” and her husband, Ron Peluso, the artistic director for History Theatre, who are both theater friends of Ross, spoke of highlights of Ross through the years.

“It’s just an honor that you’ve become part of our lives here in Albert Lea and across the country,” Peluso said. “It’s not that you’re an actor that’s brilliant, but it’s that your soul is so generous, you’re a warm and decent person …”

Anson Williams, who played Potsie Weber, said there weren’t enough inspiring words to describe the joy and light Ross has brought to people. He said Ross’s love and care has made every day of his life brighter.

“For over 40 years, I’ve seen the magic you’ve placed in people’s hearts,” Williams wrote. “Leave it to you to show the world what hard work, courage and unconditional love can accomplish. Leave it to you to lead the way in meeting every challenge no matter how hard. …Leave it to you to bring out the best in all of us.”

Don Most, who played Ralph Malph on the show, said when they first started working together, he would love to stay and watch her scenes.

“You would mesmerize me,” Most wrote. “I would be in awe watching you at work, and just being with you on the set. How great was it for a young kid learning the ropes.”

He described her as “an incredible talent” with “a wonderful spirit.”

Ron Howard, who played Richie Cunningham, said Ross’s spirit, intelligence and talent have benefited all who have been lucky enough to be close to her.

“Through the choices you make every day, you teach us all how to reach to be our best selves and how to utilize our gifts while recognizing them as blessings never to be wasted,” Howard said.

Henry Winkler, who played Arthur “Fonzie” Fonzarelli, said Ross was the best ear with solid advice. He said they clicked as performers, actors and people.

“You have always been one of the great ladies of the theater and one of the best friends a guy could ever have,” Winkler said.

Jim Meskimen, Ross’s son, praised his mother, who he said has set a “beautiful example” and then encouraged others to do the same.

Following the program, attendees were invited to have their photos taken next to Ross on the bench with her statue. An after-party was also scheduled at Three Oak Winery right outside of Albert Lea.