Helen R. Coonradt was a caring sister, mother, grandmother and friend. She passed away on January 13, 2020. Just a few days short of her 100th Birthday, which was her lifelong goal. 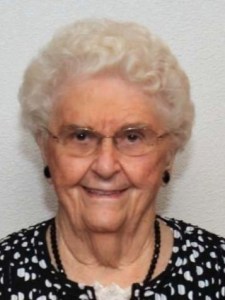 She was born to Charles and Hannah Christensen on February 4, 1920 in Albert Lea. She married Leslie “Les” Sorenson in 1940. After the death of Les, she married Kenneth Coonradt in 1950, their marriage ended in divorce.

Helen loved Jesus, her family, friends, the Green Bay Packers and Minnesota Twins. She was at home in the kitchen baking and cooking for her family. She enjoyed time with her church family at First Baptist and Bethlehem Lutheran Church. She loved traveling and spending time with family across the country.

She was preceded in death by her husbands, father, mother, baby brother, 4 sisters and spouses, infant grandson, Christopher, son-in-waw, Richard.

Arrangements are with the Bonnerup Funeral Service in Albert Lea