Hoops Unleashed gives boys a chance to get time on the court, have fun 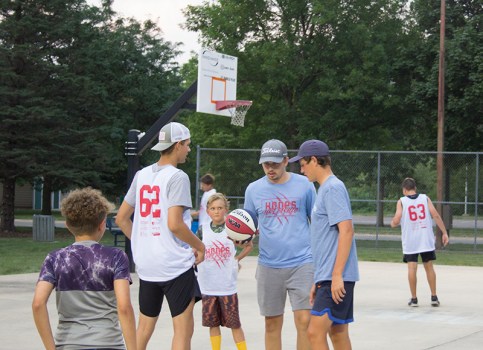 Head boys' basketball coach Harrison Koetz holds the game ball as the teams got ready to play a smaller scrimmage on half of the court. Teams played until one had scored seven points, then switched opponents. Abigail Chalmers/Albert Lea Tribune 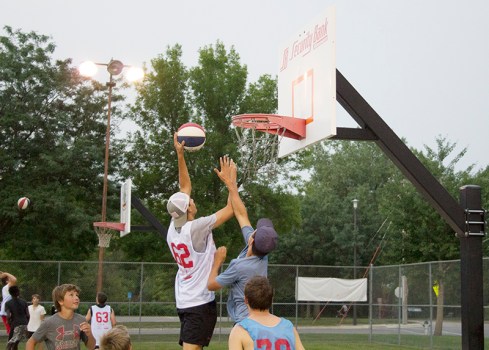 Jacob Skinness goes up for a shot during one of the scrimmages. Abigail Chalmers/Albert Lea Tribune 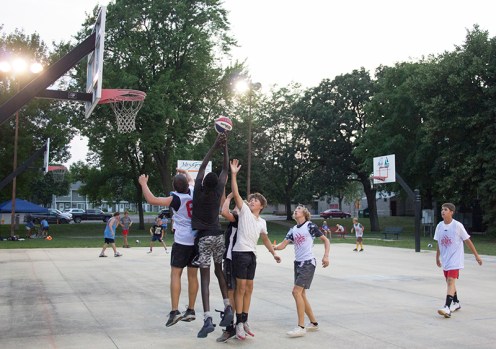 Players reach for a rebound after a shot bounced off of the rim. Abigail Chalmers/Albert Lea Tribune 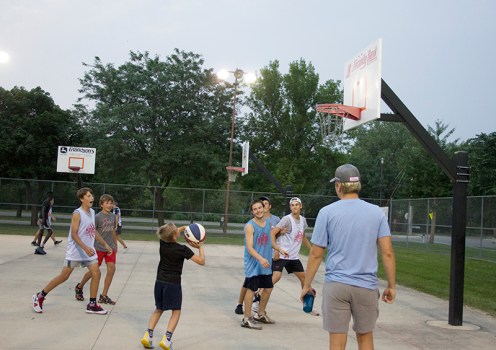 Isaac Hovde takes a shot during the first of the shorter scrimmages. Abigail Chalmers/Albert Lea Tribune 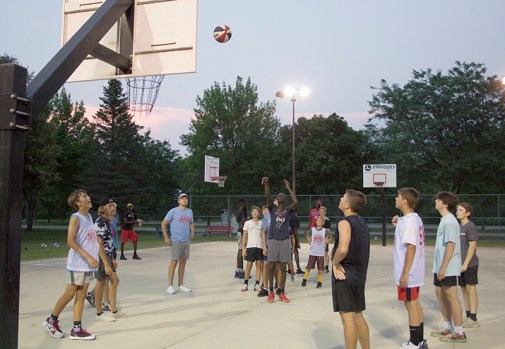 The boys took free throws to determine who would be on which team. Abigail Chalmers/Albert Lea Tribune

The Albert Lea boys’ basketball program put on their second Hoops Unleashed event of the summer on Wednesday night after getting rained out on July 14.

It took place at Frank Hall Park in Albert Lea and ran from 4 to 10 p.m. Players had the opportunity to scrimmage against friends and teammates, eat food provided by Victory Catering and take part in the recreational activities provided by the Albert Lea Parks and Recreation Department.

Court time was split up by age groups, with third through fifth graders playing from 4 to 5:30 p.m., sixth and seventh graders from 5:30 to 7 p.m., eighth and ninth graders from 7 to 8:30 p.m. and 10th through 12th graders from 8:30 to 10 p.m. According to recently-appointed boys’ basketball coach Harrison Koetz, many boys stuck around or showed up early and played with age groups other than their own. He said he was pleased to see children of all ages out on the court having a good time.

“Not only do we get reps in, it’s also fun for all of the guys,” he said. “Even our younger kids from grades 3-5, they got to come and get some reps in, too.”

“It’s fun getting in the gym again and getting on the court, and it’s good seeing a lot of people here and getting more people involved,” Skinness said.

Isaac Hovde, a fifth-grade player, said he likes having the opportunity to practice with a variety of players.

“What I like about Hoops Unleashed is that it’s a fun time to come with your friends to play basketball with different people you haven’t met before,” he said.

Koetz also said he is glad to see more people showing up to practice basketball throughout the summer.

Koertz noted everyone is welcome at the basketball workouts and events like Hoops Unleashed.

“We’re open to everybody,” he said. “Anybody can come. Even if you didn’t play basketball last year or you’re not going to play this year, you’re still welcome to come and try it out and see how it is.”

The event was organized and supervised by the boys’ basketball booster club and other volunteers. including Angie Teeter, Kristine Irvine, Adam Conn, Amy Belshan, Resha Hovde, Beau Hartman and Neil Chalmers. Koetz was involved from the beginning and has taken a more prominent role since assuming his new position.

He credits volunteers and booster club members Teeter, Irvine, Conn, Belshan, Hovde, Hartman and Chalmers with much of the event’s positive results.

“Without them, the event wouldn’t have happened or been as successful as it was, and their dedication and support is appreciated,” he said.