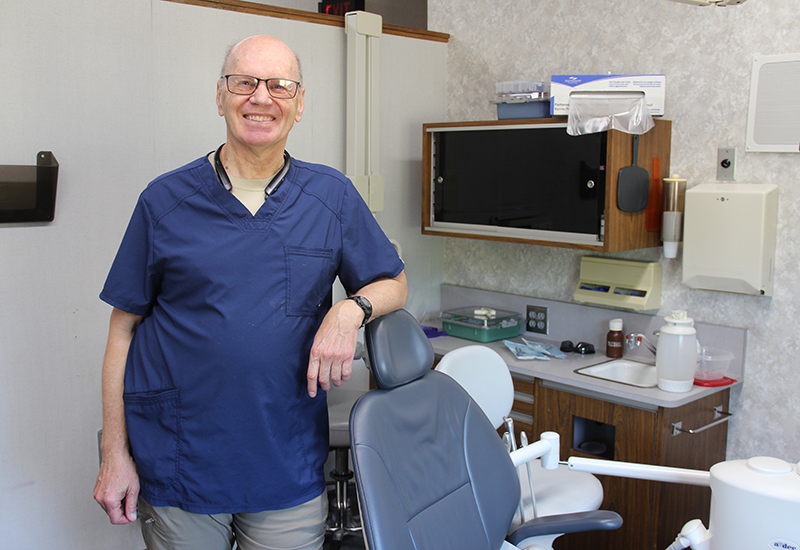 Albert Lea dentist George Lundstrom worked his last day at his longtime dental office on Ninth Avenue last week and will transition into retirement by working one or two days a week at Fountain Lake Family Dental, which purchased his business. Sarah Stultz/Albert Lea Tribune

He and his wife didn’t know a single person in the community but picked Albert Lea to start his practice because at the time there were between 16 and 18 dentists, many of whom were older and nearing retirement age, he said.

He borrowed $40,000 from a bank to get him started and little by little grew his practice, first in downtown Albert Lea for 20 years on Clark Street and then in a building on Ninth Avenue, where he remained the remainder of his years.

Now, after all his years as a dentist in the community, Lundstrom has sold his business to Fountain Lake Family Dental and will phase out of his longtime career.

“I suppose at some point it’s going to hit me — but it really hasn’t hit me yet,” he said.

He said the two dentists with Fountain Lake Family Dental found out his business was for sale and ultimately decided to move forward with buying it.

He will likely work one or 1 1/2 days a week at the Fountain Lake Family Dental office.

Seth Huiras, one of the Fountain Lake Family Dental dentists, said he and dentist Kurt Erickson have enjoyed getting to know Lundstrom and learning from his life experiences, both in dentistry and other areas of his life.

“We’re really excited that he gets to carry on his legacy and help his patients transition,” Huiras said. “Both Dr. Erickson and myself are looking forward to continue learning from him as well as letting him enjoy the twilight of his career.”

Lundstrom said he first got into dentistry because he thought he would like the work and he enjoys working with his hands and getting to know people.

When he was in ninth grade he took a vocational interest test and from that scored high on dentistry. He said he started college with the idea of becoming a dentist before switching to math.

But after four years in the Navy as a pilot, he decided maybe dental school wasn’t so bad and switched back to dentistry.

He is also glad to have had his own business.

In addition to his practice, Lundstrom served as a dentist from 2009 to 2013 in the Minnesota National Guard, completing dental exams on soldiers preparing to deploy.

Over the years, the industry has evolved with technology. Back when he first started, all paper files were kept. He got his first computer in 1988, and he backed up his files on floppy disks. From there, he has updated his computers several times since and files are kept digitally.

“Dentistry is transitioning from the analog to the digital age,” he said. “But it’s still basically a cottage industry where patients don’t get things that are mass-produced — they’re individually made for the patient and nobody else.”

Despite the upgrades in technology, he said dentistry basics are still essential, and in the end “people still want to be treated like people,” he said. “They don’t want to be part of an assembly line.

“The bottom line is to serve the patient.”

With more time available as he transitions to retirement, Lundstrom said he hopes to spend more time on his hobbies of radio-controlled airplanes and photography.

He said he has no plans on moving from Albert Lea in the future, as he loves his house and his neighbors.