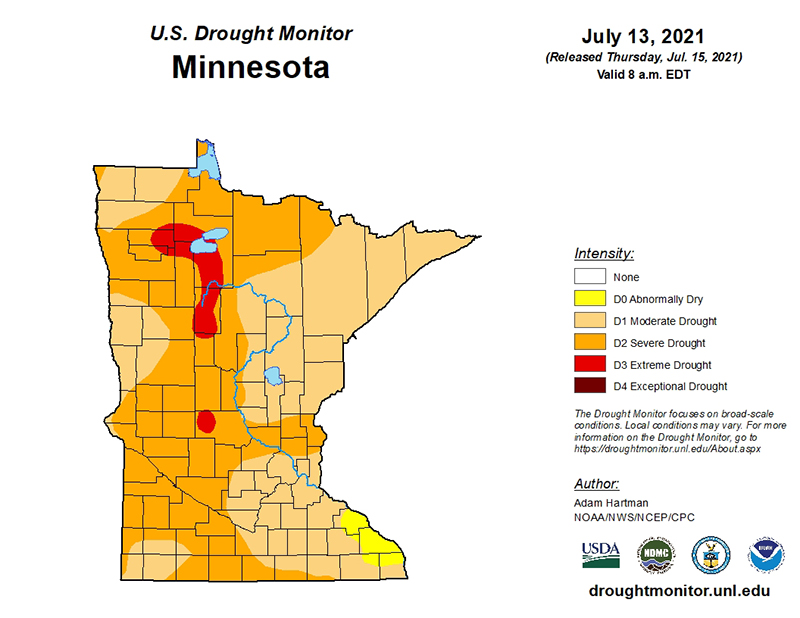 The newest map released by the U.S. Drought Monitor on Thursday shows much of the state is in severe drought, including area counties. Provided

With 52% of Minnesota now experiencing severe drought and 4% in extreme drought, the state has entered the drought warning phase. With this designation, the Minnesota Department of Natural Resources and others are taking additional steps, according to a press release.

The warning phase for drought occurs when a significant portion of the state passes thresholds for severe drought conditions at major watersheds. The state has reached this threshold. The warning phase for public water suppliers using the Mississippi River is also triggered when stream flows in the Twin Cities Metropolitan Area have dropped below designated levels. This threshold is expected to be tripped in the coming days. The thresholds for drought watch and warning conditions are specified in the Minnesota Statewide Drought Plan.

Actions that are triggered in a drought warning include:

Convening the State Drought Task Force, a panel of state, federal, regional and local experts with water-related responsibilities. The Task Force was last convened in 2012.

Notifying water appropriators with DNR permits that they should follow water conservation measures, such as reducing landscape irrigation, using more efficient irrigation equipment, and checking for and repairing water leaks. Water appropriation permit holders can contact the local DNR area hydrologist for technical assistance or with any questions.

Under current conditions, it will take at least three to five inches of precipitation spread over a period of about two weeks to significantly alleviate the drought. Soils are more efficiently replenished by multiple rainfall events than by any single heavy rainfall event. Surface water and groundwater respond somewhat differently over time.

“DNR is taking the drought seriously. We have a robust plan in place, strong partnerships across the state, and continue to take actions to respond to the current situation,” said DNR Commissioner Sarah Strommen. “We understand that people are seeing the impacts of the drought in their daily lives and have concerns about water levels and availability. While occasional water level fluctuations are natural, normal and beneficial to ecosystems, they can negatively affect tourism and recreation, agriculture, businesses and other activities that are dependent on water. Times of drought remind us all about the importance of water conservation.”

Minnesotans are encouraged to learn how much water they are using compared to the average American home and identify ways to reduce water use now and in the future. More than 75% of Minnesotans rely on groundwater for their water supply. Reducing use today saves water for the future.

“One area in which drought can be very apparent to Minnesotans is the fluctuation of water levels in lakes, rivers and streams,” said Katie Smith, director of DNR’s Ecological and Water Resources division. “What people may not realize is that DNR and other government agencies only manage a relatively small number of lakes and rivers with water control structures, and these operate under specific management plans. So the vast majority of Minnesota’s waters are subject to natural fluctuations.”

Lakes, streams, and rivers are dependent on the amount of precipitation an area receives, how much of that moisture is contributed by runoff, how much water is recharged or discharged through groundwater, and how much water evaporates.