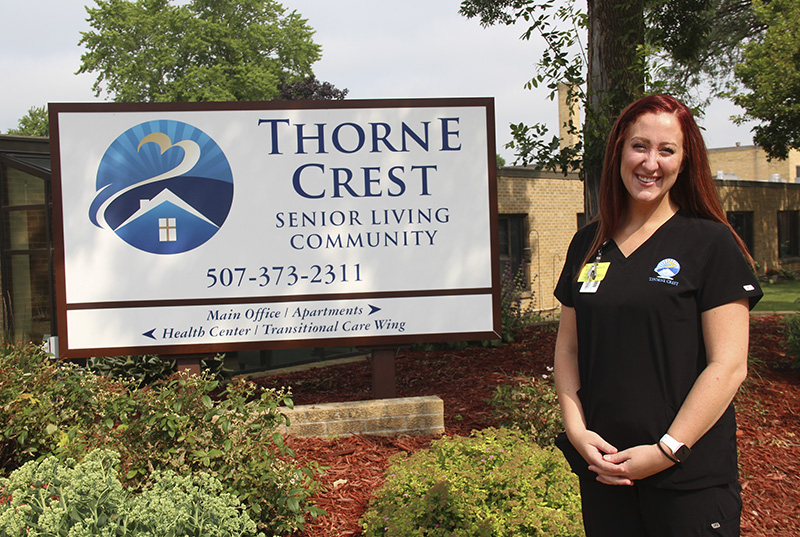 Amelia Thompson is the new director of nursing at Thorne Crest Senior Living Community. She started in the position in June. Sarah Stultz/Albert Lea Tribune

Thorne Crest Senior Living Community’s new director of nursing said she likes the opportunity her new position gives her to build connections with both residents and staff at the care facility in Albert Lea.

Amelia Thompson moved to Albert Lea from South Dakota and started in the position June 7 after working in several other nursing positions since the start of her career.

Thompson said she started her nursing career working for what was then called Regional Health in Rapid City, South Dakota. She worked in a float pool there for a year, before transitioning to the emergency room for five years.

She said she found a constant issue with patients coming in and out of the emergency room who had cares that were not being tended to at home. If those things had been done properly, they could have helped prevent the emergency room visits. These concerns prompted her to move into case management, where she could help set patients up for success at home.

From there, one of her leaders came to her with an opportunity in the dialysis department, where she said she worked with a great team and great patients. She said she loved building a connection with those patients and worked with many geriatric patients.

She worked there for 1 1/2 years until her husband, Mark, got a promotion to run a Ford store in Clear Lake, and she applied to work at Thorne Crest in Albert Lea as the director of nursing.

She said she thought it would be a great opportunity to have a job where she could build those same connections with residents and get to make a positive impact.

Thompson said she oversees about eight to 10 nurses and 10 to 12 certified nursing assistants in the long-term and transitional care units. She also oversees a clinical manager and an MDS coordinator.

Her primary duties are making sure staff are meeting quality measures, including charting correctly and initiating care plans.

She is also trying to help as much as she can on the floor with the other nurses and trying to get to know the residents.

She said when she was on the floor as a nurse when she first started, there were people in leadership who hadn’t worked in their shoes.

“I know what it feels like to be there,” she said, noting that she wants her staff to feel like they can have their voices heard.

Thompson has a bachelor’s degree in nursing and is pursuing her master’s degree in health care administration.

She and her husband have two children.

She said they wanted to live somewhere close to her work and found a house and fell in love with it. She will work across the street from Hawthorne Elementary School, where her children will go to school, and be close to home to let their two dogs, a bulldog and a great Dane, outside.