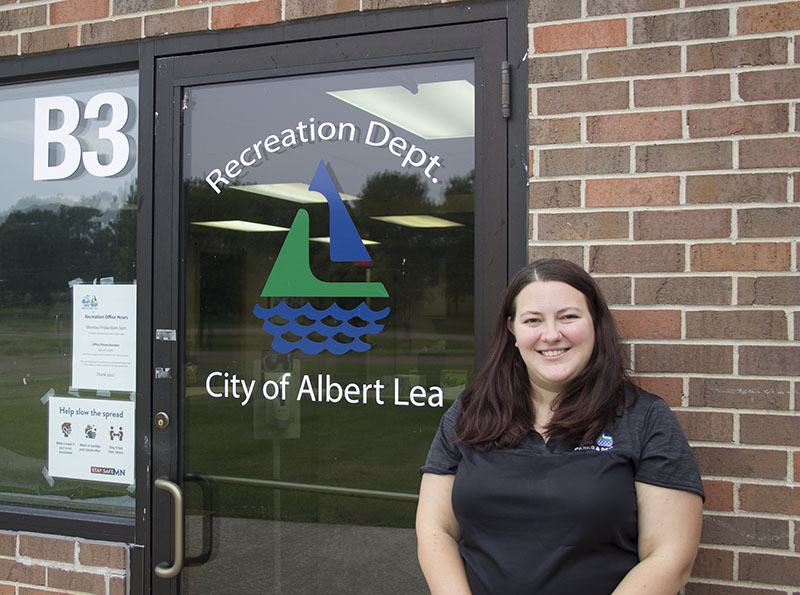 Dani Bakken, originally of Marshfield, Wisconsin, has been in the Albert Lea area for many years alongside her husband, Corey, daughter, Eloise, and dog, Ivy. After earning a license in therapeutic recreation at Winona State University, she moved to Albert Lea and began working at Fountain Centers as a recreational therapist for about four years.

She also worked at Owatonna Parks and Recreation for three years, where she oversaw the senior center and their therapeutic recreation program as a recreational supervisor. Then, when the opportunity arose in Albert Lea, Bakken moved back.

Her former job in Owatonna was similar to the recreational coordinator role she assumed in Albert Lea, but she now manages all of the city’s programs rather than specifically running two of the many as she did in Owatonna.

One of Bakken’s new responsibilities is the Albert Lea Aquatic Center, which had already opened by the time she settled into her new position. Though things were hectic at first, she said that she has enjoyed the transition.

“I came in at a really busy time with the pool being open,” she said. “It’s been a fun adjustment of getting a feel for the pool and how things run here versus in Owatonna.”

In addition to running the city pool, Bakken is also in charge of park management and planning the programs for the fall and winter seasons. She has also been working with the senior center to offer senior center trips again. She said that she has mostly been focused on adapting to her new role, but mentioned that she does have goals in mind for the future.

“I think right now we’re just trying to adjust,” she said. “I would love to see a TR (therapeutic recreation) program or more of that inclusive recreation within our programs. A lot of communities need that and need to continue to grow that.”

Bakken also plays a major role in planning and executing community events, and her attention has been on the Safety Day program set for Aug. 10. The event will run from 4 to 7 p.m. at Morin Park and will give the community an opportunity to learn necessary safety skills from local firefighters, police officers and electricians.