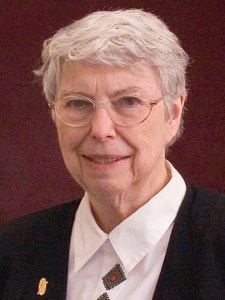 Joan Marie was born on December 27, 1928, in Albert Lea, Minn., to James H. and Beulah (Espey) Tuberty. She had two older brothers, James T. and Robert B. Tuberty. Sister Joan was a member of the Sisters of St. Joseph of Carondolet, St. Paul, Minn., from 1948-1969, and a member of the Order of St. Clare, Bloomington, Minn., from 1977-1986. She transferred to the Franciscan Sisters of Little Falls in 1986 and made final vows on April 8, 1989. Sister Joan ministered as a nursing instructor, consultant and clinical specialist in psychiatric nursing. She taught at St. Catherine University and the University of Minnesota. Later she ministered as a counselor and spiritual director, and for 24 years was a teacher and guide of Centering Prayer at St. Olaf’s Church in Minneapolis. During this time she lived at Exodus House, a Catholic Charities transitional housing facility, where she provided counseling and support to the occupants. In 2016, due to health issues, she moved to the convent in Little Falls.

Sister Joan was a very intelligent, creative and loving person who could see the light in other people’s eyes and truly be present to them. Her interest in the Eastern Christian tradition led her to use her artistic talent to write icons. She had a deep understanding of wholistic spirituality. In her own words, she said, “I am a Franciscan Sister, rooted in the richness of our tradition which is to live the Gospel with joy and generosity…it is the love of Christ that urges me on. People need to make that space inside of them available to grace and to honor that sacred space in others. As we come to know stillness in our lives, we become available to the beauty that surrounds us, to see the stars, the flowers, the beautiful things that are in our world.” She had a multitude of friends, many of whom were the recipients of her spiritual guidance and wisdom.

Sister Joan was preceded in death by her parents, brothers and sister-in-law, Frances A. Tuberty. She is survived by sister-in-law, Beverly Tuberty; nieces, Virginia Ann (Bob) Holmes, Yvonne Pilot and Joan Tuberty; nephew, Timothy (Patricia) Tuberty; as well as several great and great-great nieces and nephews; and her Franciscan Community. shelleyfuneralchapels.com 320-632-5242.