As Line 3 nears completion, pipeline battles far from over 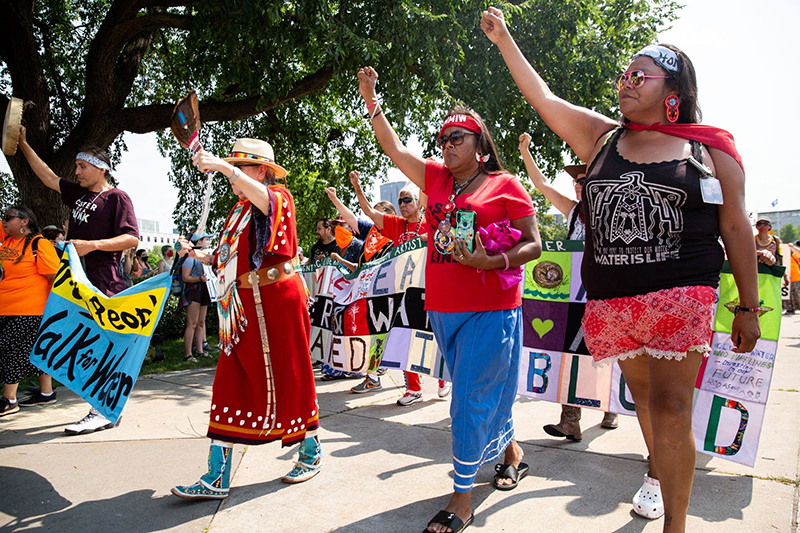 Climate activists who identify as water protectors arrive at the Capitol for the Treaties not Tar Sands rally at the Minnesota State Capitol last Wednesday. Some of the group walked 256 miles from the Mississippi River headwaters for the rally. - Evan Frost/MPR News

Over a thousand people filled the grounds of the Minnesota State Capitol in St. Paul last week and vowed to continue their fight against Line 3.

They erected tipis and held ceremonial dances and prayers. They listened to speeches by activists including Nancy Beaulieu, a founder of the RISE Coalition, which stands for Resilient Indigenous Sisters Engaging, who told the crowd that the crude oil pipeline endangers Indigenous treaty rights.

At the same time, in northern Minnesota, more than 3,000 workers continued the final stages of construction on the 340-mile stretch of pipeline. Enbridge says the new Line 3 is on track to be operating by the fourth quarter of this year.

This month, the Minnesota Supreme Court and the state court of appeals delivered opinions upholding state regulators’ approval of the project.

But even as legal options dwindle, opponents plan to continue contesting Line 3 through protests and in court — even after oil begins flowing from Canada’s Alberta province.

“We will absolutely continue not only in the legal fight but also in the calls to the Biden administration to exert the power that they still have,” said Moneen Nasmith, a senior attorney for Earthjustice, one of the environmental groups opposing the project.

Opponents are pressuring President Joe Biden’s administration to cancel the federal water permit for the project issued by the U.S. Army Corps of Engineers. Their legal appeal of that permit is still pending.

There’s also an unusual lawsuit filed in tribal court by the White Earth Nation against the Minnesota Department of Natural Resources on behalf of wild rice. The DNR has asked a federal court to block the suit. That case is unlikely to be resolved before major work on the pipeline wraps up.

But it’s part of a wider movement by Native American tribes pushing back on pipelines and other projects they view as an environmental risk and a violation of treaty rights.

“I think that tribes are going to be enacting their own laws,” said Joe Plumer, an attorney for the Red Lake Nation in northwestern Minnesota, which opposed Line 3. “Tribes are going to take the bull by the horns and call state actors in their official capacities into the tribal court — not for any money damages, but for injunctive relief to stop what they’ve been permitting.”

Enbridge has argued that the existing Line 3, built in the 1960s, needs to be replaced because it’s corroding, needs extensive maintenance and is operating at reduced capacity.

The company says the new pipeline is made of thicker, coated steel and will better protect the environment from spills or leaks.

Over the past decade or so, there’s been increased debate over how pipelines contribute to climate change — by transporting oil and natural gas that emit greenhouse gases when they’re extracted, and later, when they’re burned for energy.

“As awareness of those issues has grown, I think we are seeing more and more opposition to pipeline projects,” said Romany Webb, a senior fellow at the Sabin Center for Climate Change Law at Columbia Law School in New York. “And that has had implications for the approval of those projects.”

That increased scrutiny is likely to make it more difficult for new or expanded pipelines to get built in the future, even though energy companies including Enbridge argue that pipelines are needed to transport oil and gas safely and reliably.

“Certainly, fossil fuel companies are on notice that these projects are not going to just sail through quietly,” Nasmith said. “They are going to face a tremendous amount of opposition from a tremendous number of places.”

The Line 3 debate has focused attention on the role of pipelines in the state’s energy transition, said Alexandra Klass, who teaches environmental and energy law at the University of Minnesota.

“You can have all sorts of great policies on the books to promote renewable energy, but your progress is going to be limited,” she said.

However, as the nation looks to reduce its dependence on oil and natural gas, it’s not ready to get rid of them completely, Webb said, and existing infrastructure needs to be maintained.

There’s another consequence of the debate and protests over Line 3 that Klass thinks is a positive one: More young people are paying attention to energy and climate issues.

A decade ago, most high school students wouldn’t have known about the Dakota Access, Keystone XL or other pipelines, Klass said. With social media attention, the involvement of celebrities and groups like Youth Climate Intervenors, that’s changed.

“The fact that you have young people focused on fossil fuel infrastructure that’s underground and they can’t see, is something that I think is good,” she said.