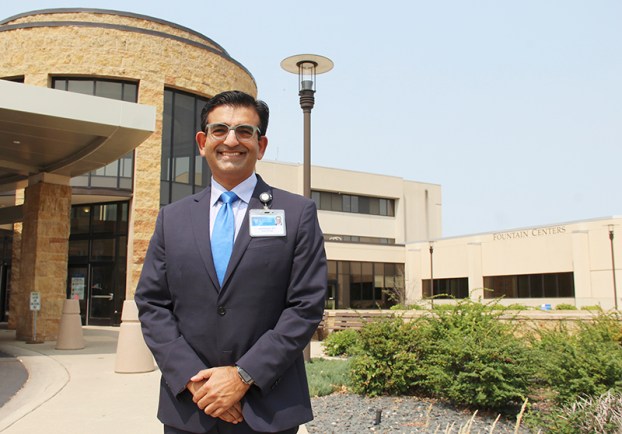 Dr. Sumit Bhagra started as the site lead physician for Mayo Clinic Health System in Albert Lea and Austin earlier this month. Prior to that position, he worked as the medical director of both sites. Sarah Stultz/Albert Lea Tribune

Dr. Sumit Bhagra is enthusiastic about the future as he comes into his new role as site lead physician for Mayo Clinic Health System in Albert Lea and Austin.

The newly created position combines the duties of the site CEO and the site medical director. Bhagra was formerly the medical director of both sites starting in 2015 and officially took over this new position on Aug. 9. In the creation of the new role, CEO Dr. Mark Ciota is rotating out of his position as CEO.

The decision to create the new position is part of a streamlining of hospital operations throughout the Mayo Clinic Health Systems network and reflects similar moves in the Owatonna/Faribault and Red Wing regions.

“This was a regional plan,” Bhagra said Monday. “The timing seemed right.”

“I’m very honored to be selected for this role,” he continued. “I’m fortunate to have the experience in multiple roles at Mayo Clinic Health System as well as regional levels.”

The timing of the regional moves comes as one of Mayo’s biggest projects wrapped up in both Austin and Albert Lea not long ago. That project included basing the Medical and Surgical Inpatient Care units, Family Birth Center and Intensive Care Unit in Austin. In Albert Lea, the phased project included making improvements to the psychiatric unit inpatient care, a remodel of the Cancer Center and new space for Fountain Centers addition program.

However, Bhagra begins his new duties at the height of a renewed surge in COVID-19 cases, spurred on by the delta variant. Approaching this problem is part of a three-goal approach Bhagra is taking to the new position.

“That’s a fire we need to put out,” he said. “Manage it effectively so that the health system can perform at its highest level.”

Facing the threat with renewed vigor is an effort to reduce any possible strain on facilities the ongoing pandemic may bring. Part of that is also managing a process that accounts for the other services and illnesses that need treatment at both campuses.

The second of Bhagra’s three goals is to continue improving quality of care, a goal that any business should wish to maintain.

“Things we need to do better,” he said. “That’s not to say we weren’t doing well. It’s just a process of continuing improvement.”

The third goal follows a Mayo initiative called “Bold. Forward. 2030.” The backbone of this initiative is to think ahead to how things might be different in 2030. This includes innovating, bending the cost curve and evolving telemedicine in a sustainable manner.

“How do we keep things we learned and continue to innovate?” Bhagra said.

Innovations like telemedicine and the newly announced mobile clinic are just two of the leading faces of this program.

All of these goals work toward maintaining and increasing the functionality of the system at a high level throughout the existing sites, including fast internet. However, many rural communities in Minnesota are still without broadband access that would allow for an easier slide into telemedicine services.

“Efforts are underway at Mayo and at the elected officials level to make broadband a part of infrastructure,” Bhagra said.

Even as work continues to bring effective broadband to the area, Bhagra recognizes how exciting things are. As bad as the COVID-19 pandemic has been, it has highlighted the new role technology will play in the future.

“That has changed with the pandemic,” Bhagra noted. “Everything has become more electronic and the time is right for telemedicine. We’re very excited looking into the future of that.”

Importantly, Bhagra also wants to push the continued building of relationships within Austin and Albert Lea. These strengthened bonds will only serve to forge a bond for future success down the line, Bhagra said.

“Community engagement is a very strong theme that works with local businesses and officials,” he said. “Understanding that needs are being met and needs are being understood.”

Part of that comes from a reflection of Mayo and what it can do on its end to further these same bonds including that care is given in a timely manner, reducing unnecessary care while introducing high quality care and investing in communities. This should lead to continued strength into the future, though what that might be Bhagra hesitates to say definitively.

“As I look back, if somebody would have asked me five years ago, any prediction I made at the time would have been wrong,” Bhagra said. “I didn’t factor in the pandemic. I do not want to make an informed guess for the next three to five years. With Mayo Clinic’s ‘Bold. Forward. 2030.’ plan we’ll look at every process we have, make it better to innovate, cure, connect and transform.”

The Albert Lea school board on Monday took action on a number of items, including approving health and safety measures... read more