Carolyn peacefully left this world at Good Samaritan Center in Albert Lea, MN on December 21, 2020. She was born on December 22, 1931 on the Dahl farm in Freeborn County to Alvin and Vivian (Overgaard) Dahl. Carolyn was the youngest of 5 children. 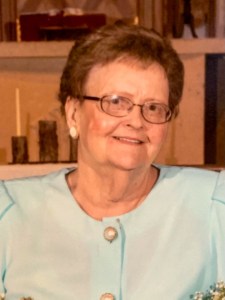 She attended school in Freeborn County and graduated from Albert Lea High. After graduation Carolyn decided to move with a friend to California. While living in California she worked as a telephone operator and met her future husband, David Schmitz. Carolyn and David were married at the Hitching Post wedding chapel in Las Vegas, Nevada on August 20, 1953. As David was in the Navy they moved around and resided in various states during their marriage: California, Connecticut, Pennsylvania, Virginia, and back to California. In 1971 Carolyn and David moved their family back to Albert Lea. Carolyn stayed home to raise her 4 boys and eventually worked at Mrs. Gerry’s Kitchen for several years. In their later years Carolyn and David bought a home in Florida and enjoyed many winters there with family and friends. Carolyn loved baking, and spending time with her family. She had an adventurous spirit and was always ready for the many family adventures; from long car trips to boating expeditions and even scuba diving!

She was preceded in death by her parents, her husband of over 50 years, and siblings and their spouses: Paul Dahl (Jeanine), Alton Dahl (Beano), Roger Dahl (Arla) and Gloria (Keith) Seberson.

The family would like to thank the staff of Hidden Creek and Good Samaritan Center for the time and care they gave Carolyn. We especially want to thank her many nieces and nephews who looked out for her and were very special to her.

Arrangements made by Bonnerup Funeral Services.