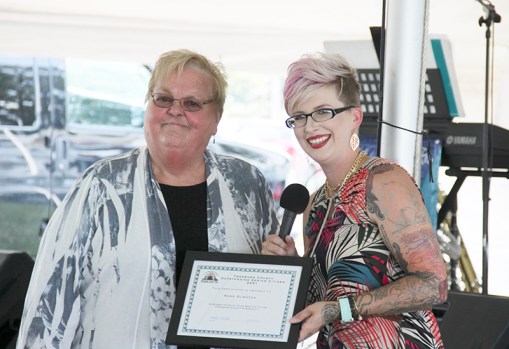 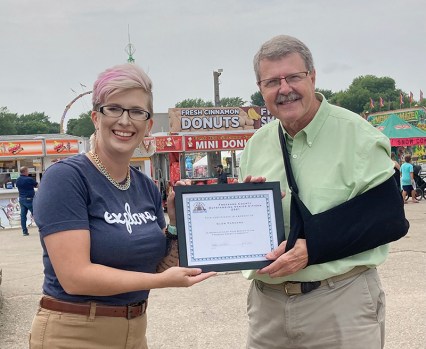 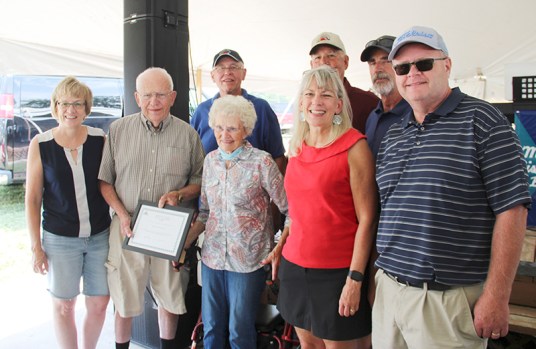 Former Freeborn County Fair Manager Norm Fredin was inducted into the Freeborn County Agriculture Hall of Fame Wednesday at the fair. Here, here is pictured with his family and members of the fair board. Sarah Stultz/Albert Lea Tribune 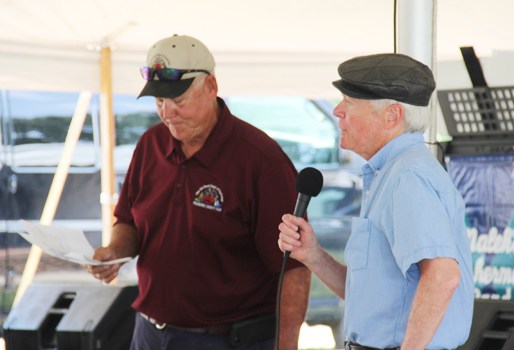 The Krikava Family Farm was recognized as a 2019 Century Farm at the fair on Wednesday. Sarah Stultz/Albert Lea Tribune 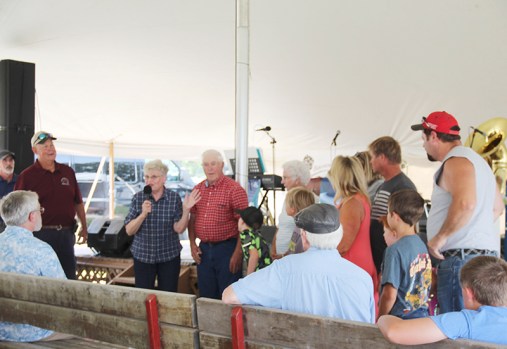 The Arlo and Julie Wallin family was recognized as a 2020 Century Farm. Sarah Stultz/Albert Lea Tribune 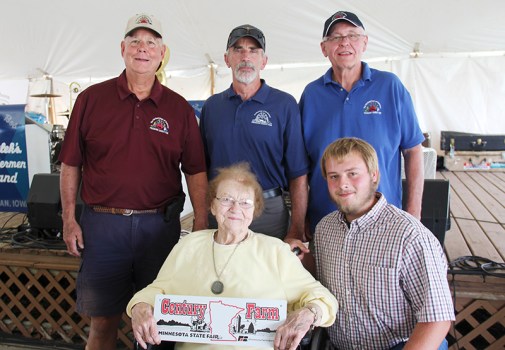 The Jacobs farm was recognized as a 2020 Century Farm. Sarah Stultz/Albert Lea Tribune 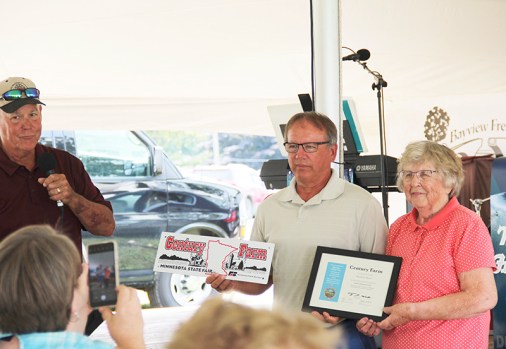 Knudson Meyer farm was recognized as a 2021 Century Farm at the fair on Wednesday. Sarah Stultz/Albert Lea Tribune

The ceremony also recognized the county’s newest century farms and Norm Fredin as a new inductee into the Freeborn County Agriculture Hall of Fame.

Albert Lea Convention and Visitors Bureau Executive Director Holly Karsjens thanked Olmsted for her dedication to the community in both good and bad times. Olmsted has been known for helping people, especially in times of crisis.

A nomination letter for Olmsted said she spent over 20 years as the director of the Freeborn County Crime Victims Crisis Center and was always “a caring, innovative and strong advocate for anyone in need.”

This year, she has gone on to help people in difficult times across the nation and became a volunteer and instructor for the American Red Cross’s Virtual Family Assistance Center, the nomination letter stated.

Olmsted, who was also named the Red Cross Volunteer of the Year by the southeast Minnesota chapter, said during the last year she started taking phone calls for the Red Cross as a mental health volunteer with people who have lost loved ones due to COVID-19.

“It’s serious, and I will continue to do that as a volunteer,” she said.

She said she has such regard for these first responders and what they go through in their jobs. She encouraged others to support them and express their gratitude to them for the work they do.

She credited the area’s first responders and frontline workers.

“Rose’s life revolves around helping others in need,” the nomination stated. “She walks the walk and talks the talk and has helped millions of people during her life.”

“Rose knows her heart is in helping individuals,” another letter of support stated. “She volunteers in a way that her volunteering is reaching individuals.”

Parsons, a former teacher, has been involved in numerous committees and efforts in Albert Lea.

His nomination letter stated he served as a committee chairperson to fundraise and bring the Marion Ross statue to Albert Lea, was a team leader for the Governor’s Fishing Opener and has been a community host for Experience Albert Lea, giving tours to potential new Mayo employees.

He has acted, directed and served on the board of Albert Lea Community Theatre for 50 years, providing entertainment and reasons to explore Albert Lea, the nominator said. He has also been a mentor and tour guide for Discover History with the Freeborn County Historical Museum and has served on numerous boards and clubs, including the CVB board, Golden K Kiwanis, Minnesota Festival Theatre and others.

“When a volunteer is needed for a task, Glen is always stepping up whether it’s his area of expertise or not,” the nomination stated.

“Glen has a passion for our community and helping others. He gives whole-heartedly and unselfishly to each position he serves in.”

He was unable to attend the ceremony.

Karsjens said she was honored to present the awards.

“It seems every day, it’s becoming more and more important to be the good,” Karsjens said after the ceremony. “Our community is fortunate to have so many beautiful humans working to make it a wonderful, fun and safe place to live, work and play. But it truly takes everyone, and giving well deserved applause where it’s due, is just one step in continuing the goodness!”

She encouraged people to nominate outstanding seniors next year and to give thanks to them at any time.

Also recognized during the ceremony were the following as Century Farms:

Paul Hansen, Freeborn County Agricultural Society board member, said Fredin was “the face of the fair” for many years, serving as county fair manager from 1999 to 2017. Fredin was also his high school ag teacher.

Fredin said when he got notice that he was going to receive the award, he first thought about all of the others who have been named to the Hall of Fame before him. He said he enjoyed working with the fair board and thanked them for the honor.