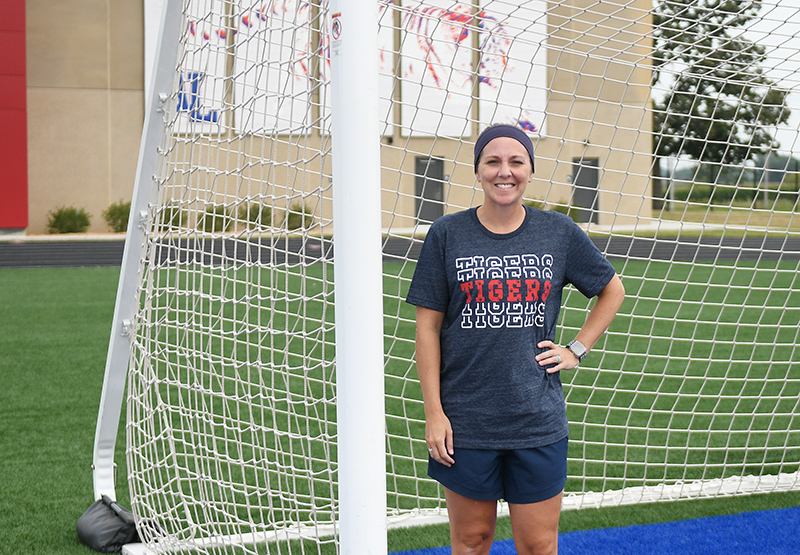 Amy Wacholz is taking over head coaching duties for the Albert Lea girls' soccer team. Wacholz played soccer for Albert Lea and went on to play four years of soccer for Concordia College. She was an assistant coach on last year's squad. - Tyler Julson/Albert Lea Tribune

After spending the 2020 season on the sidelines as an assistant coach for the Albert Lea girls’ soccer team, Amy Wacholz will take on the new role of head coach starting the 2021 season.

Wacholz, a 2003 graduate of Albert Lea, played soccer all four years in high school, before moving onto the collegiate level, playing four years for Concordia College in Moorhead. She played at a high level throughout all of her playing years, earning an All-State honor her senior year in high school and being named All-Region her senior year of college.

Wacholz graduated from Concordia with a minor in coaching, knowing she wanted to come back to soccer at some point in her life.

The opportunity to get into coaching presented itself about a year ago, according to Wacholz, when her job scheduling changed to allow her time to pursue coaching.

“I’ve just had this passion for soccer my whole life,” Wacholz said. “ I love it. I’m happy to be back in it, and it’s kind of fun to be back where it all started.”

Wacholz joined the coaching staff midway through the preseason last year, after a spot unexpectedly opened up. She was the 9A coach throughout the year, and while the different levels of teams were separated last season due to COVID-19 protocols, Wacholz said it was an advantage just to be part of the program.

“We were still able to see the home varsity games and be down by the girls, getting to know them a little bit,” she said. “ Had it been a non-COVID year, I would have been able to get to know the girls a lot better, but I feel like I got to know a lot of them so that will definitely help.”

Wacholz said one of the biggest challenges this season is going to be filling the shoes of the numerous seniors that left the team last year, all of whom were starters.  She said she’s confident in the ability of the players that will be coming in to fill those positions, and said she thinks it’s going to be a great year.

As for goals, Wacholz said she wants to give players the same experience she had in high school.

“I want to instill in the players the love of soccer that I had,” she said. “I know that everybody might not love soccer as much as I do, and for some of these girls, soccer might not be their first love. I think that’s a big part of why I wanted to coach, is just being able to play that role for these girls while they’re here.”

The girls’ soccer team started its season with scrimmages Aug. 21 in Fairmont. The regular season kicks off Aug. 28 on the road against Fairmont.

“I’m just looking forward to being a part of this program,” Wacholz said. “It’s always fun looking at the team at the beginning of the season and then at the end, seeing what they’ve accomplished and the things they’ve done throughout the year. So I’m just excited to be a part of the program.”

Outside of coaching, Wacholz said she loves to spend time with her husband, Adam, and their two daughters, Brinley and Kensley.