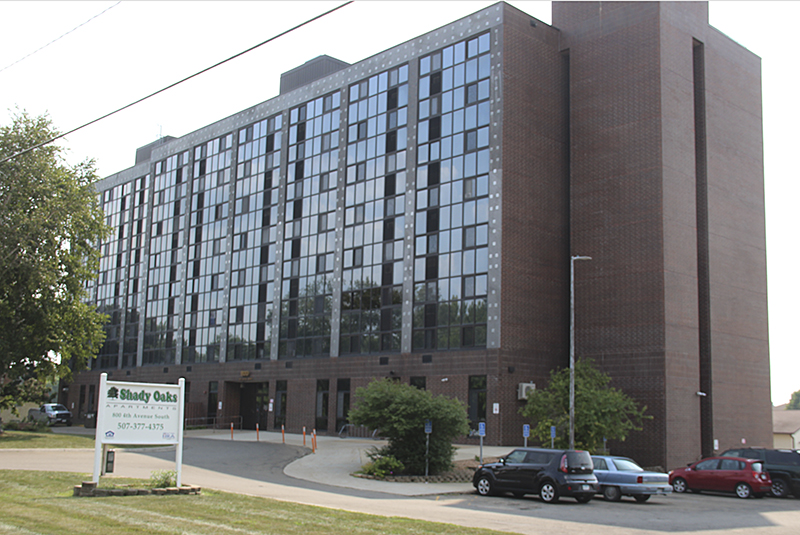 The Albert Lea Housing and Redevelopment Authority has been awarded $3.5 million to repair the exterior of the Shady Oaks apartments building. Money will also go toward installation of new security cameras in the building. Sarah Stultz/Albert Lea Tribune

The Albert Lea Housing and Redevelopment Authority was awarded $3.5 million to repair the exterior of the Shady Oaks high-rise building and install additional security cameras in the building.

The Albert Lea project is the largest Publicly Owned Housing Program award the Minnesota Housing Finance Agency has selected across the state in the past four funding rounds — 2012, 2014, 2017 and 2018, according to the agency.

“The failing brick façade and existing water infiltration issues at Shady Oaks are a major safety concern,” the agency stated. “Completing this project is necessary so that these issues do not lead to further damage.

The Publicly Owned Housing Program prioritizes applications for health and life safety projects. When making selections, the agency also identifies and funds items in the worst condition and with the most time-critical need among applications.

The program uses the proceeds of general obligation bonds to provide financing in the form of a 20-year deferred, forgivable loan for rehabilitation and preservation of public housing.

The agency stated large capital projects such as the one at Shady Oaks are well beyond the annual capital fund allocation from the United States Department of Housing and Urban Development, resulting in public housing agencies having to save for several years to have sufficient funds to complete a project. At the same time, HUD rates public housing agencies on the timely spending of their capital funds, so saving up can place these agencies in a bind as it can be counted against them for not spending their funds in a timely manner.

Albert Lea Housing and Redevelopment Authority Executive Director Jeanne Leick said the last POHP grant the HRA received was in 2010 for the installation of an air handler in the building.

The exterior of the building has been a concern since at least 2018, when the building failed a HUD inspection, and scaffolding was initially put up to keep bricks from falling on anyone below, she said.  The damage is primarily on the east wall of the building, though there is some damage on the north and south sides.

In 2019, metal was placed around the most damaged parts of the building to keep the bricks in place.

The repairs will be around the entire building.

Leick said the next steps will be to put out a request for qualifications for architects and engineers, and the agency has two years to close on the project, which includes writing the scope of the project and selecting the contractors.

Aside from the exterior repairs, some funding will also go for the installation of additional cameras that came out of concerns about safety and were requested by the building’s resident council, which meets regularly to provide input, she said. The cameras will be placed on each floor in the hallways.

She said agencies such as the Albert Lea HRA in Minnesota are blessed to have the POHP funds, as similar programs are not available in other states.

The overall project is expected to cost $4.2 million with the remaining coming from the HRA. Leick said the HRA portion is coming from the agency’s 2021 and 2022 capital fund dollars, operating funds, the 2021 tax levy designated for public housing and all of the HRA’s 2022 tax levy.

She said she and others are working diligently to improve Shady Oaks for tenants. New elevators were completed in February, and there are now two fully functional elevators in the building.

They have also installed community gardens working with the Blue Zones project, are planning to purchase grills for residents to use and have purchased other games and activities for people to take part in within common areas.