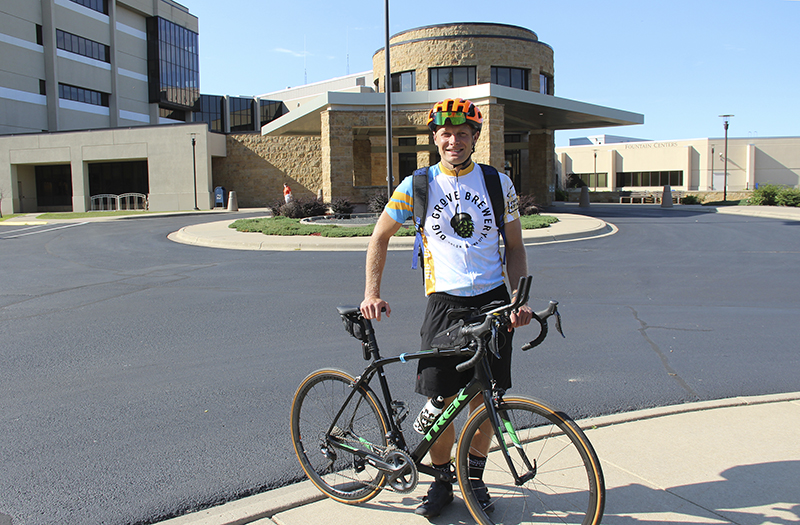 Dr. Nate Sanders, a podiatrist at Mayo Clinic Health System in Albert Lea, bikes to and from work almost every day of the year. Sarah Stultz/Albert Lea Tribune

Long before Dr. Nate Sanders was hired as a podiatrist at Mayo Clinic Health System in Albert Lea, he had a history of coming to the community to visit family who lived there.

Sanders, who has worked at the clinic since 2015, said Albert Lea felt like home because of the time he spent in the city seeing his grandparents. He was raised in the Bloomington, Burnsville and Apple Valley areas.

Sanders received his doctorate in podiatric medicine from Des Moines University and completed his foot and ankle surgical residency at Hennepin County Medical Center in Minneapolis.

“With my mom and dad’s parents being from Albert Lea, it was a no-brainer to come down here,” he said of when the job opportunity arose. “I was pretty excited when I got the job here.”

In his specialty of podiatry, Sanders said he treats many different ailments, ranging from traumas, fractures, tendon ruptures and wounds to arthritis or degenerative changes.

“We see a lot of different things from geriatrics, to pediatrics to sports medicine — a whole plethora of foot problems,” he said.

Sanders said he knew growing up as a child that he wanted to do something with medicine. He recalls breaking both his arm and leg in high school, and developed a love for podiatry when he mentored other doctors in high school.

“I really feel like this was what I was born to do,” Sanders said. “At the end of the day, it’s all about helping patients, fixing problems, fixing fractures and getting rid of their infections — seeing the end result and getting people healthier and making them happier.”

When he’s not working, Sanders said he enjoys participating in triathlons. He started doing them when he was in medical school in 2007 at a time in his life when he said he was a little overweight.

“I figured I had to change some stuff,” he said. So, he changed his diet and started getting into triathlons.

Though he does not participate in them as much as he used to, he said he makes it a priority to work out once a day and still be active. He also rides his bike to work almost every day of the year, which he said gives him a little time to himself.

He and his wife, Laurie, have three children ages 3,5 and 7, who also keep them busy.

He also enjoys scuba diving, particularly when his grandparents lived in Mexico and operated a scuba diving resort.