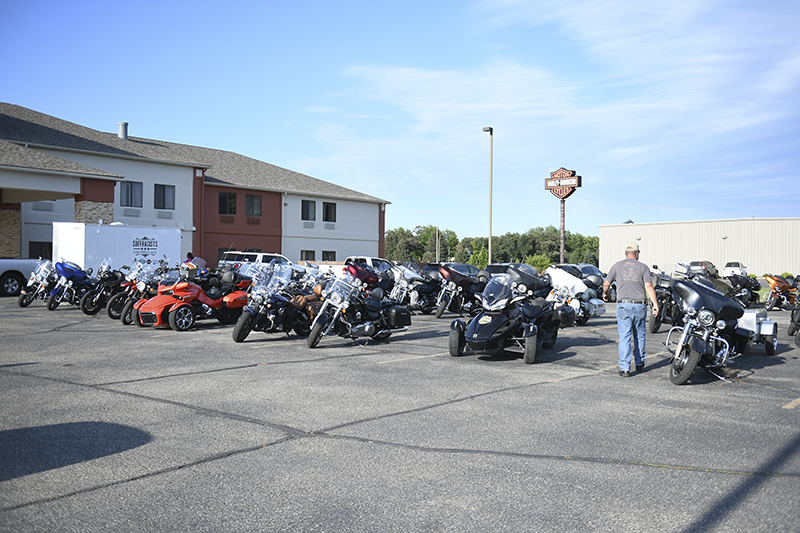 The Suffragists Centennial Ride made a stop in Albert Lea for the night Thursday on their cross country trip celebrating the 100-year anniversary of the passage of the 19th amendment. - Tyler Julson/Albert Lea Tribune

The Suffragists Centennial Ride made a stop to spend the night in Albert Lea Thursday. Celebrating 100 years since the 19th amendment was passed, giving women the right to vote, the motorcycle ride is making a cross country trip with many significant stops along the way.

Alisa Clickenger, the event producer for the ride, said she put the event together because she likes to promote positive images of motorcycling and creating get-togethers for female motorcyclists. 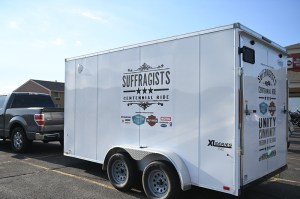 “The other thing I love doing is creating these epic events for female motorcyclists,” Clickenger said. “By wrapping this motorcycle event around a historical event like this, it gives us a good narrative. It also gives us a reason to come together in celebration. I think it’s important to look back at where we’ve been to see how far we’ve come and know how much further we can go.”

The ride started in Portland, Oregon, July 31 and will arrive in Washington, D.C., Aug. 19. The group made a stop in Sturgis to take part in the motorcycle rally, and has plans to stop in Milwaukee, where Harley-Davidson was founded, and Knoxville, Tennessee. Clickenger said Tennessee played a large role in the passage of the 19th amendment because it was the 36th state to ratify the 19th amendment, giving it critical mass and allowing it to go to Washington to be signed into law.

When the group reaches Washington, D.C., Clickenger said there will be a four-day conference for women motorcycle riders promoting the activity.

“I’m producing a women’s motorcycle conference at the end,” she said. “Instead of just getting to D.C. and turning around, I thought we need something to sustain that energy and bring more women in.”

While Clickenger said there is a core group of women riding from coast to coast with her, there are many riders who have joined the group for some of the shorter segments.

“We had a bunch of women ride with us to Sturgis and then go back,” Clickenger said. “We also added a bunch of people in Sturgis. Basically our numbers are growing as we cross the United States. We’re adding more and more people now. I anticipate we’ll have about 150 at the end.”

While the group has seen some incredible sights along the way and still has more fun planned down the road, Clickenger said it’s about more than that for her.

“I love bringing women together and supporting women in creating lives they love. So often society tells us we need to be a certain way, but we can still be good people, good parents, good business people and, at the same time, march to the beat of our own drum … There’s something magical that happens on an epic journey and I love watching it unfold.”