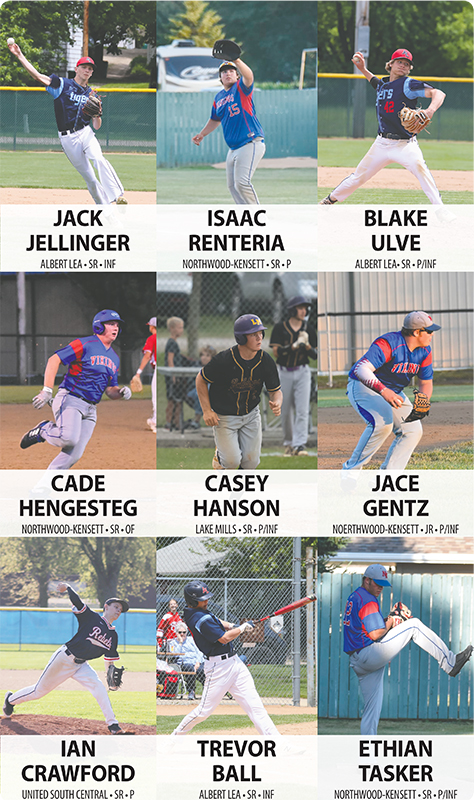 “Jack was the engine for our team this year,” said head coach Sean Gaston. “His work at the plate included many clutch two-out RBIs that propelled us to victories. For a good chunk of the season it felt like if Jack came up with a runner in scoring position, we were going to get a run, automatic.”

Jellinger was recognized as an All-Conference, All-Section and a Minnesota Senior All-Star player thanks to his efforts in Albert Lea’s historic season.

Isaac Renteria led the area in slugging percentage with .716, RBIs with 30 and was tied for the area lead in home runs with six. Renteria also recorded a batting average of .392, an on-base percentage of .511, 29 hits and 20 runs scored. He also spent some time on the mound this season, recording 52 strikeouts in only 40 innings of work, and ended the season with a record of 3-3.

“Isaac was able to jump back from a shoulder injury from last season and throw a complete game shutout in his first game this year,” said head coach Matt Pfaltzgraff. “His passion and desire for the game was second to none during practice and games.”

Balke Ulve had one of the more memorable postseason runs in recent history recording three wins on the mound for the Tigers in the playoffs, including one that propelled the Tigers to their first state tournament appearance in over 50 years.

Ulve amassed a 6-3 record this season while pitching over 60 innings with an ERA of 1.96 and striking out 56.

“Blake was our ace all year long and his constant belief in himself and competitive drive played a large role in us getting to state,” Gaston said. “Blake was a leader in his attitude and actions and pitched some of the biggest outs in our program’s history.”

Cade Hengesteg has been a mainstay in Northwood-Kensett’s lineup for a number of years, being a major driving force in the Vikings posting some of their best seasons in program history. Hengesteg led the area with 31 hits, including seven doubles, a triple and four home runs. He finished with a batting average of .365, 29 RBI and 26 runs scored.

“Cade was and has been the main staple in the outfield in his career,” Pfaltzgraff said. “He did not commit a single error while roaming the outfield grass and his bat lit up when we needed it to. He was able to help mentor the underclassmen and lead them into highly competitive games with a clear mindset.”

Hanson was a bright spot in the Bulldogs lineup, finishing the season with a .409 batting average, 27 hits, 23 runs scored and 20 RBI. He was also a force on the mound, pitching 46.1 innings, while striking out 75 batters and only walking 16.

Jace Gentz was a powerhouse at the plate for the Vikings this season. Gentz compiled a batting average of .395, a slugging percentage of .697, and recorded 30 hits, including three doubles, a triple and six home runs, 12 runs scored and 25 RBI. He also spent some time on the mound, pitching 32.2 innings, striking out 52 batters and finishing with an ERA of 3.64.

“Jace helped make the pitching rotation a whole as we could rely heavily on him to come out and compete,” Pfaltzgraff said. “Jace hit his batting stride at the perfect time hitting home runs in each of the last games leading up into the substate final.”

Ian Crawford was the ace for United South Central this season, recording a 7-4 season while finishing with a 2.43 ERA. He was also a presence at the plate this season, hitting in 21 RBI and ending with a batting average of .383.

“Ian was steady at the plate and on the hill for us this year,” said head coach Pat Frank. “He threw strikes and did a nice job hitting in the middle of the line up for us.”

“Trevor was a vital guy to us who played a bigger than expected role on the mound throughout the end of the year and postseason,” Gaston said. “Offensively, Trevor was a big part of the top of our lineup all year and was awesome over at 1B. His defensive play anchored our infield.”

Tasker rounded out the lineup of power hitters playing for Northwood-Kensett this season. Tasker ended with a .308 batting average, a .476 on-base percentage, a .590 slugging percentage, 25 runs scored, 26 RBI and 24 hits including eight doubles, one triple and four home runs. Tasker also led the area in strikeouts on the mound, sitting down 85 total batters in 53.2 innings of work.

“When it comes to pitching dominance at Northwood-Kensett, Ethian Tasker has established himself on top of the leaderboards,”  Pfaltzgraff said. “His 263 strikeouts is first in the Varsity Bound Era with the next person having only 159. He has a total of 13 wins with the next best having 7. This season he was tasked to compete against a tough hitting league and took it by storm.”

NRHEG did not nominate any players for the All-Area team.