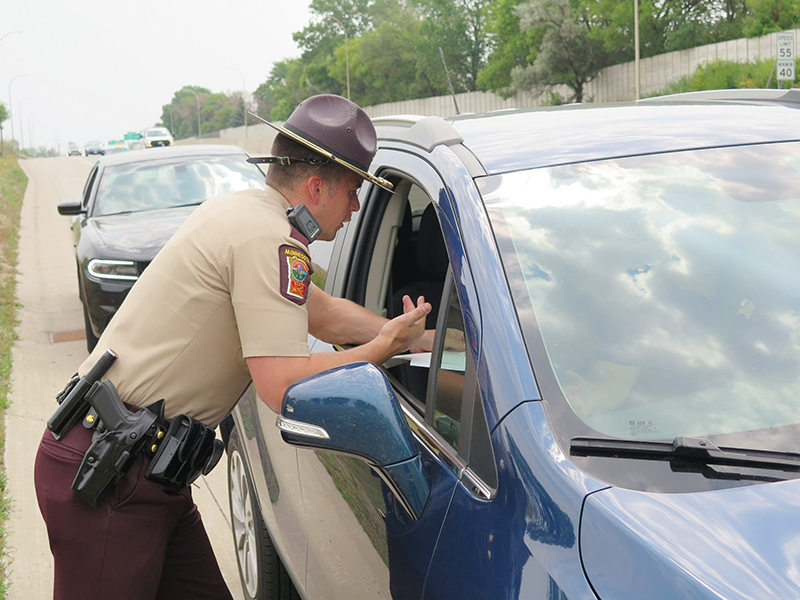 Minnesota State Patrol Lt. Gordon Shank was cruising on westbound Interstate 94 outside of downtown St. Paul when he spotted someone to pull over.

“This driver’s speeding,” he said. “And not only speeding — they’re on their cell phone as well.”

Shank’s radar began wailing. The faster the speeder moved, the higher the pitch.

Shank said 80 mph is hardly extreme these days. “We’re seeing drivers that are 120.”

“We’ve had enough. I mean, our fatal crashes are very high right now — some of the highest we’ve seen in a long time — and a lot of it has to do with speed, so for us, we’re tired of seeing these crashes happen that are 100 percent preventable.”

Shank ticketed the driver for speeding but didn’t throw the book at him: no fines for changing lanes illegally and violating Minnesota’s hands-free cellphone law.

According to the Minnesota Department of Public Safety, so far this year there have been nearly one-third more traffic fatalities in Minnesota compared to the previous year. Speed, officials say, is the biggest factor in deadly crashes and fatal crashes resulting from speeding, which are up more than 40 percent over last year.

Mike Hanson the director of the Office of Traffic Safety said excessive speeding is a problem all over Minnesota.

“It’s like anything goes out there, and our roadways were never designed for that,” Hanson said. “The only way our transportation system works safely is if we cooperate with each other and not compete with each other.”

Hanson served as a state trooper for more than three decades before getting into management. He said people are telling him they are afraid to drive because of what they’re seeing.

“Really what we’re seeing in the last two years are speeds that are being encountered that are literally off the charts,” Hanson said. “It’s really unprecedented.”

Public safety officials say the pandemic-related reduction in traffic allowed for more opportunities to speed on relatively open roads. But Hanson says there’s more to it. He thinks self-centered, dangerous driving is part of a broader breakdown of civil society.

“There’s a social contract that has been broken,” she said.

Morris directs the HumanFIRST Laboratory in the Department of Mechanical Engineering at the University of Minnesota. She’s also a research scholar at the U’s Center for Transportation Studies.

Morris says what goes on with drivers more broadly reflects what’s going on with society.

“And so, whatever is really plaguing us as a society, whether that’s, you know, substance abuse, or sort of toxic individualism, I suppose you could say, you know, where people are really focused on their own needs over the needs of others,” Morris said. “I think that will show up on our public roadway system.”

As the pandemic changes and people switch from working at home to returning to the office, traffic is picking up. Morris says the increased volume will slow down drivers. But she says more traffic alone will not fix the underlying problem of discourteous, dangerous driving. And she’s worried about that.

Morris said studies have found that increasing penalties for traffic violations doesn’t necessarily change behavior because people know it’s unlikely they will be pulled over.

Back in the patrol car, trooper Gordon Shank said he’s convinced that every time he stops someone for speeding, he is saving lives.