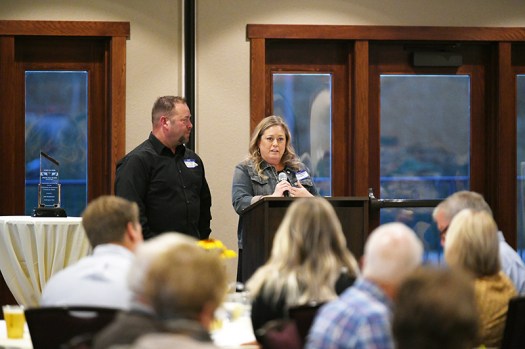 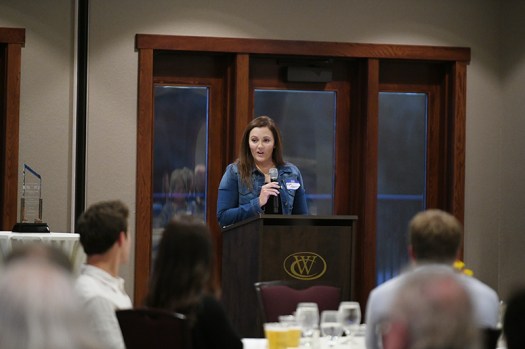 Karlie Kriewall was one of 12 former Tigers inducted into the Athletic Hall of Fame Saturday night. Tyler Julson/Albert Lea Tribune 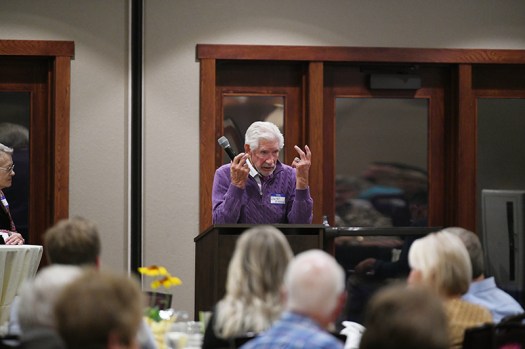 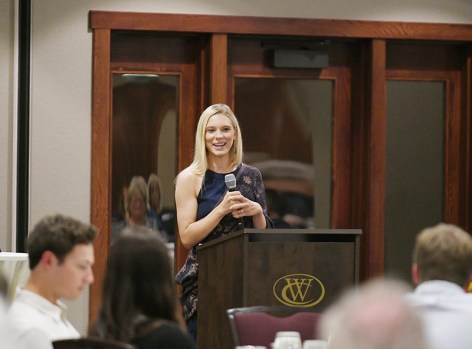 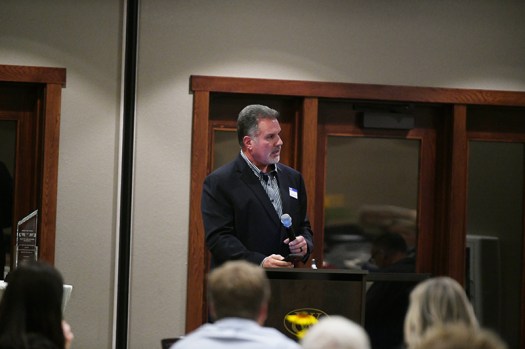 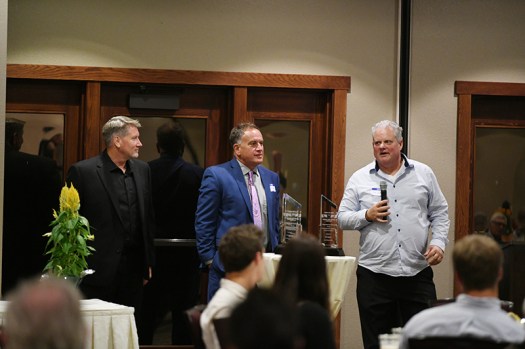 From left, Jim Wendorf, Ray Keating and Jon Schmitz were present to accept their induction for their work in the 1978 state champion 200-yard medley relay swim team. Not present was Gary DeRoos. Tyler Julson/Albert Lea Tribune 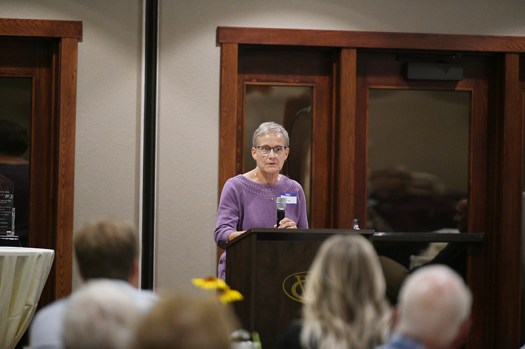 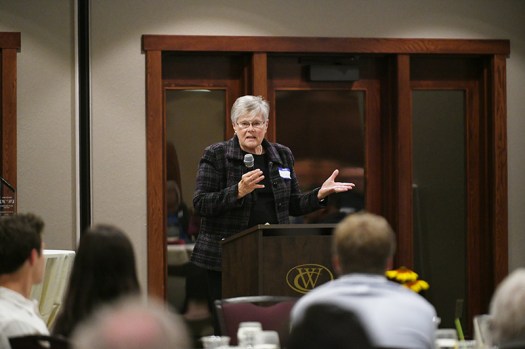 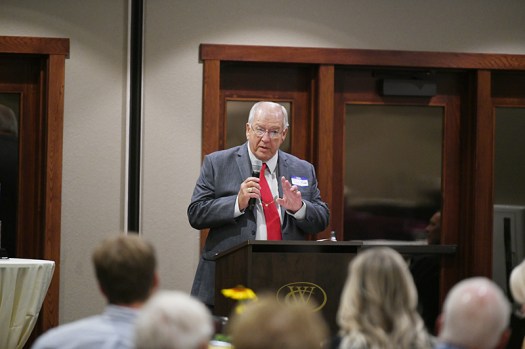 Don Kropp, who coached at Albert Lea in some capacity for over 50 years was inducted in the hall of fame. Tyler Julson/Albert Lea Tribune

Six individual athletes, two coaches and one relay team consisting of four athletes were the newest inductees to be welcomed into the hall of fame.

Goodmanson was a three-sport athlete during his time at Albert Lea, excelling in football, basketball and baseball, earning numerous All-Big Nine Conference selections throughout those years.

His induction was in memoriam, and his children, Stacey and Phil Goodmanson accepted the award on behalf of this family.

Stacey Goodmanson said her father never talked much about his playing days with the exception of some rare occasions.

“Dad was a devoted Tiger fan and he flew his colors proudly,” Goodmanson said. “If you saw him around town, you frequently saw him in his cherry and blue or his maroon and gold … I want to personally thank the hall of fame committee for this ceremony, not only for the hours you’ve committed to this and the hard work you’ve put in, but for giving Phil and I the opportunity to learn about our dad’s achievements as an adult.”

Kriewall participated in swim and dive and track and field in high school, but excelled in diving. She lettered all four years in the sport, earned All-State honors her sophomore, junior and senior years, all while breaking several school records along the way.

Kriewall continued her career at Boise State University, earning conference championships and earning a spot at the USA National Championships.

“I was fortunate enough to go to high school and be a part of a community who all rallied behind one another and truly supported each other,” Kriewall said. “From having athletes from other sports show up to watch out meets, to getting announced on the morning announcements about how I did the night before makes me beyond grateful to call myself a Tiger.”

Schneider was an all-around athlete for the Tigers, participating in football, basketball, track and field, and baseball. He was named a letter winner nine times throughout his high school career and set numerous records on the track team, some of which stood for many years.

Schneider was inducted posthumously. Accepting on behalf of his family was his sister, Marian Knutson, and friend Lowell Brady.

“He was always practicing some sport, but never missed being home for supper,” Knutson said. “His positive attitude and many talents, along with the desire to excel at everything he did, was who he was all his life. And he had a great life.”

Dress starred in basketball during his time in high school, setting school records in rebounding and scoring which stood for a number of years. He was also named first-team All-Big Nine Conference and was runner-up for Mr. Basketball his senior season.

“I’ve been blessed with some great teammates, coaches and mentors throughout my life,” Dress said. “So many people helped me, and I would like to thank them all. Basketball has, is and always will be a big part of my life. Playing for Albert Lea was awesome. You weren’t just playing for yourself, you were playing for the community.”

Robinson ran in both cross country and track and field throughout her high school career, competing in the state meet for both sports all five years. In cross country, she earned All-State and All-Conference honors and was a three-time Big Nine champion. In track and field she was an All-State honoree and was the state champion in the 1,600-meter run, earning 10 Big Nine Championships and setting school records in the 3,200- and 1,600-meter races.

Robinson thanked her parents and as well as all of her previous coaches including Jim Haney, Margo Wayne and Kevin Gentz.

“I am a byproduct of being raised by a good village,” Robinson said.

Claassen was a star runner on the cross country and track and field teams in high school. She won championships at the conference, district and region levels, on top of competing at the state tournament. She was also named an All-American in 1976 and the Prep Track and Field Athlete of the Year.

“I want to thank my family and my friends that are here tonight to be with me to accept this incredible, incredible honor of Albert Lea High School Hall of Fame,” Claassen said.

The group won the 200-yard medley relay in 1978 just fractions of a second shy of the state record, earning All-American status in the process. Done during the early years of the swim program in Albert Lea, this group is credited with blazing the path for the future of the program.

“I’m seeing a lot of old teachers and coaches here,” Keating said. “Never underestimate how you influence people. There’s not a day that goes by at work or something where I don’t think about what someone taught me. A lot of it came from my teachers and coaches. There are times where is may not seem like you’re getting through to lugheads like me, but there are things that are registering that will go on forever.”

Beese served as the coach of the girls track and field team for 38 years, was assistant coach for the girls swim and dive team for 10 years and spent some time assisting the volleyball team. Beese coached a number of athletes that were named All-Conference, Region I and state participants. She is credited with helping spur the start of women’s athletics in Albert Lea.

“Albert Lea is a great place,” Beese said. “The girls have gone from zero all the way with many more opportunities to choose from. We always said we got the cream of the crop in our sports.”

Kropp thanked his wife for being understanding and accommodating his coaching schedule all those years, as well as his three sons, all of which he coached in one sport or another.

“I coached under seven different head coaches,” Kropp said. “Half the time I would be coaching both boys and girls, and it was my pleasure to coach many, many, many fine student athletes.”