4-H runs in their genes 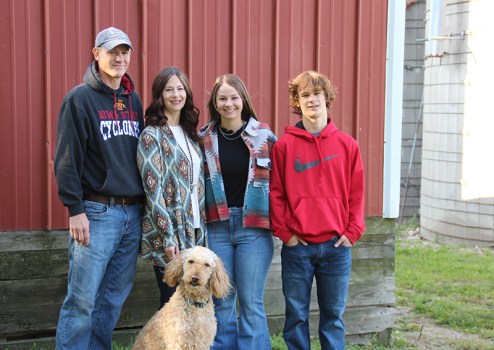 The Wasmoen family is one of several families throughout Freeborn County that participates and has found success in 4-H. From left are Travis, Kristen, Elizabeth and Aivin Wasmoen. Sarah Stultz/Albert Lea Tribune 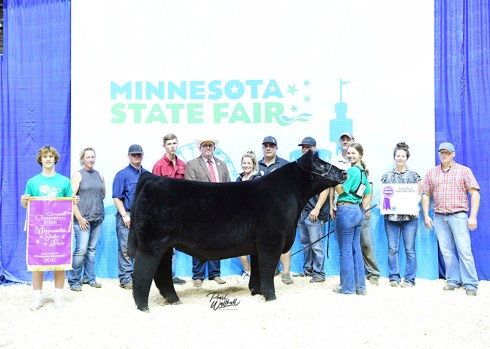 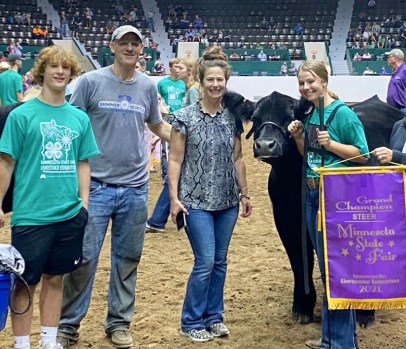 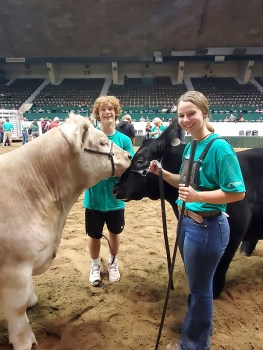 Aivin and Elizabeth Wasmoen meet up with their cattle at the state fair this summer. Provided

For many 4-H families in Freeborn County, participating in 4-H is a bond that is passed down from one generation to the next.

For Travis and Kristen Wasmoen and their children, Elizabeth and Aivin, 4-H has been a way to learn hard work and determination, but also a way for them to share time together as a family over the years.

Kristen Wasmoen said when she was in 4-H, she showed heifers and steers and took part in what she described as “all the fun stuff” the program offers, including Share the Fun, which showcases 4-H’ers talents. She won grand champion breeding heifer, and her husband won grand champion steer at the Minnesota State Fair in 1992.

The children have been just as busy — and successful — participating in general projects, as well as livestock categories. They started when Aivin, now 16, was in kindergarten and Elizabeth, now 19, was in second grade.

Aivin Wasmoen has exhibited in the aerospace, vegetable gardening, arts and crafts, and self-determined categories at the county fair and has received multiple purple ribbons. He earned a state fair trip with his Self-Determined project, in which he conducted a science experiment to see if pirates covered one eye to see better in the dark.

He has also exhibited market barrows and gilts at the county fair and received the reserve champion pen of three swine at the county fair in 2019. He has received purple ribbons for his market barrows in 2017, 2018, 2019 at the Minnesota State Fair, and in 2020, he received an honorable mention in showmanship in the state 4-H swine virtual show. He showed a Charolais steer at the state fair this year and received a purple ribbon.

Elizabeth Wasmoen, who is now attending Iowa State, has exhibited in the arts and crafts, home environment, vegetable gardening, and exploring animals categories at the county fair and earned state fair trips with her Exploring Animals project where she researched different cattle breeds.

In addition, she has been a part of the leadership of the Conger 4-H Club, serving as treasurer from 2015 to 2019 and as president starting in 2019.

She said she has particularly enjoyed the people she has met along the way and the values 4-H teaches. She also credits her public speaking skills to her time with 4-H.

“I feel like the best way to learn how to do something is to actually be involved in something,” she said. “Showing cattle and everything has taught me so much determination and hard work. If you want something, you have to work for it. It’s not just going to be handed to you.”

She estimated she worked probably six to eight hours a day with her steer preparing for the fair. Early in the morning and again at night, the cattle are placed in a cooler building for a period so they continue to grow hair. She also would rinse them, brush them, dry them, put hair product in them and then dry that in, along with other chores. She and her brother also had to exercise the cattle, leading them around the yard.

She said the responsibility has taught her many lessons.

“4-H has taught me the most, and I’ve valued 4-H the most my whole life,” Elizabeth Wasmoen said. “There’s so many organizations you can be a part of, but this one encompasses everything.”

The family said 4-H provides opportunities for essentially all interests, noting there are even opportunities to showcase talents in fashion and performing arts.

‘There’s literally anything you can do,” Kristen Wasmoen said.

The 4-H clubs in the county generally meet once a month, except for during fair month, and take part in social activities and service projects as well.

Though there are not as many clubs as there used to be, the family said it is easy to get involved in 4-H still with many clubs in the county.

They said the county has one of the most competitive 4-H programs in the state.

“If you can get a trip out of Freeborn County, you’re probably going to do really well up there,” Travis Wasmoen said. “Our county is hands-down the most competitive, highest quality county as far as livestock in the state.”

The father credited the years of knowledge and experience that are passed down through the generations with helping set 4-H’ers in Freeborn County up for success.