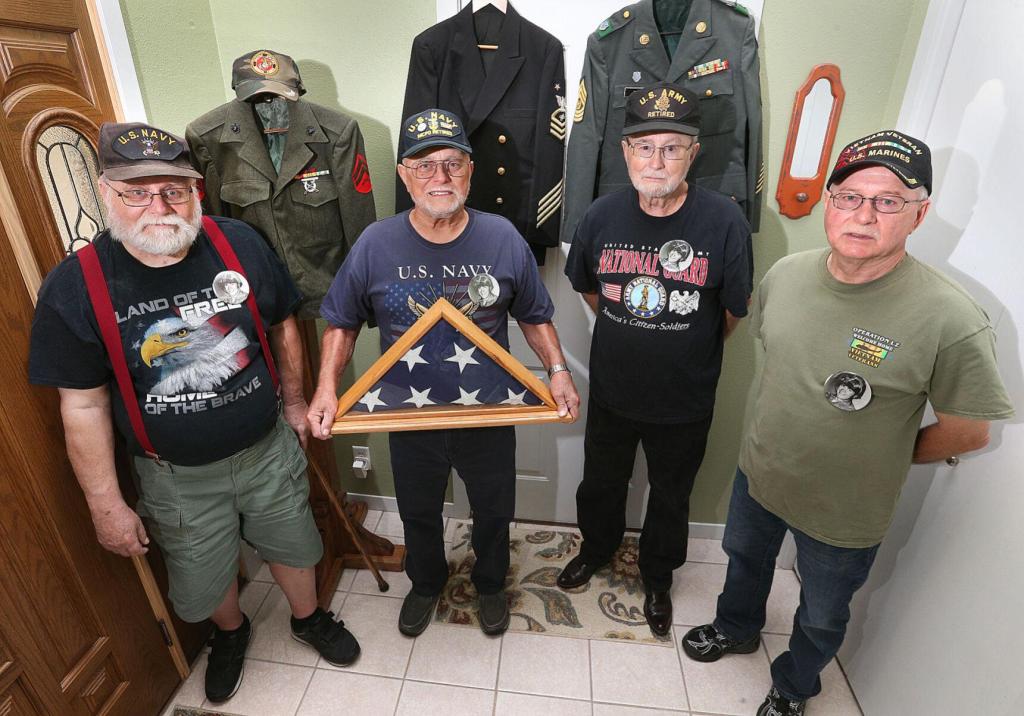 The King Brothers, including Rick, from left, Roger, Bob and Ray, are going on the Sept. 11 Freedom Honor Flight from La Crosse to Washington, D.C. All four are veterans. Peter Thomson/La Crosse Tribune

By Steve Cahalan for the La Crosse Tribune

They’ve waited a few years to make the trip, but now four King brothers and a King son are looking forward to being on the Sept. 11 Freedom Honor Flight from La Crosse to Washington, D.C.

“I’m excited about it,” said Roger King, a Navy veteran who lives in Onalaska. He will make the trip with his brothers Bob, Ray and Rick, and with Roger’s son, Tim, an Air Force veteran who is going as a guardian.

The Sept. 11 trip, which comes on the 20th anniversary of terrorist attacks on America, will be the first Freedom Honor Flight since the 24th flight on Sept. 14, 2019. There were no flights in 2020 because of the COVID-19 pandemic.

The participants on the Sept. 11 flight had to be vaccinated against COVID-19, and will have to wear masks at times.

“At this moment, we have 96 total (veterans on the Sept. 11 trip),” said Bill Hoel, a Freedom Honor Flight board member and past president. “That includes 17 Korea veterans and 79 Vietnam veterans,” he said. The chartered airplane also will carry guardians, medical staff and board members.

Funded with donations, the Freedom Honor Flights from La Crosse began in 2008 and allow veterans to visit memorials in Washington for free. The Sept. 11 flight will be the 25th for the program, which has two each year. The 26th flight will be on Oct. 9.

Application forms and information are available at www.freedomhonorflight.org. Priority is given to veterans of World War II, the Korean War and the Vietnam War, in that order, and to any veteran with a terminal illness.

“I’d like to visit the Tomb of the Unknowns again,” Roger King said of the upcoming trip. “And I want to go with my brothers to the Marine memorial,” said King, who served on submarines during his 1962 to 1981 stint in the Navy and then lived in northern Virginia for nine years.

“I think it’s an honor for us to get to be on (the flight),” said Roger’s brother, Bob King, who lives in Hollandale, Minn., where the King brothers were raised. “I want to see the monuments,” he said, adding that he hasn’t been to Washington, D.C., before. “It will be fun and wonderful, I think.”

Bob King was in the Minnesota Army National Guard from 1955 to 1984, and was reactivated in 1991 for Operation Desert Storm.

Another brother, Ray King of Albert Lea, Minn., has been in Washington, D.C., once, about 15 years ago. “We saw just about everything except the Marine Corps memorial,” said King, who served in the Marines from 1964 to 1967 and was in Vietnam. “So that’s high on my list. And so is the (Vietnam Veterans Memorial) wall,” he said.

The fourth brother making the Sept. 11 trip, Rick King of La Crosse, was in the Navy from 1962 to 1966 and was on a destroyer off the coast of Vietnam for about two years.

“I would like to see the (Vietnam Veterans Memorial) wall,” Rick King said of the upcoming trip.

“I’m looking forward to going with the veterans — my uncles and my dad (Roger),” said Tim King of Onalaska, who served in the Air Force from 1987 to 2013.

Roger King said his parents had seven sons and one daughter. “And five of the seven (sons) served in the military,” he said.

One of the five was the late Ron King of Hollandale, who was in the Marine Corps from 1957 to 1966. A framed photo of Ron in his Marine uniform, and the American flag that was on his casket at his funeral, rested on a table as his brothers gathered around it to be interviewed.

Later, Hoel said those on the 25th Freedom Honor Flight won’t be at any events that commemorate the 20th anniversary of the Sept. 11, 2001, terrorist attacks on America.

“The Pentagon has closed access to its 9/11 Memorial Park due to COVID,” Hoel said. “So we’ll be visiting most of our usual sites – Arlington National Cemetery, and the World War II, Korean and Vietnam memorials, as well as the Marine Corps War Memorial (also known as the Marine Corps Iwo Jima memorial).”

Face masks are required by federal rules, Hoel said. “They must be worn in any airport, including hangars, and on aircraft and chartered buses,” he said. “The National Park Service is also requiring masks be worn by all visitors to Arlington National Cemetery. We believe that’s the only memorial at which veterans will have to wear masks.”

Proof of vaccination against COVID was required of participants for the Sept. 11 trip. “Our board made the decision (to require that) in order to follow the policies sent out by the Honor Flight Network,” Hoel said.