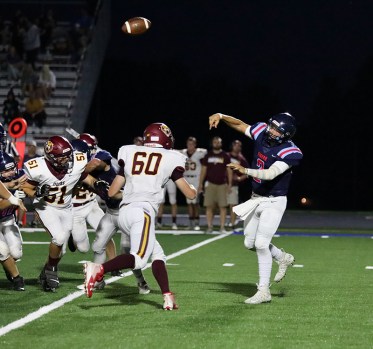 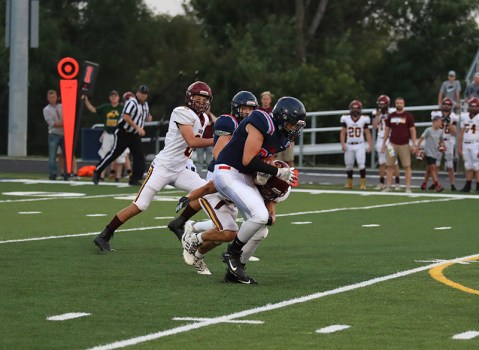 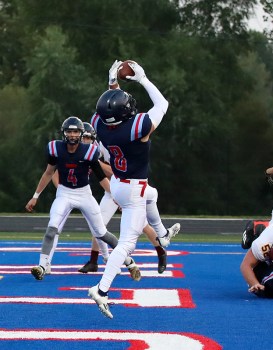 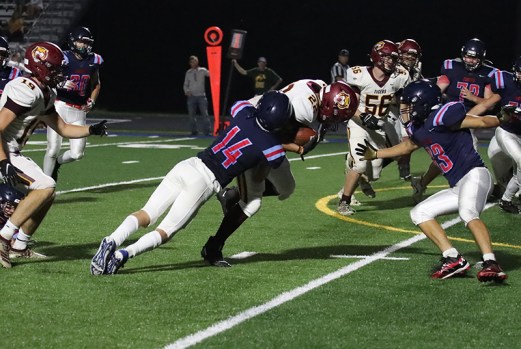 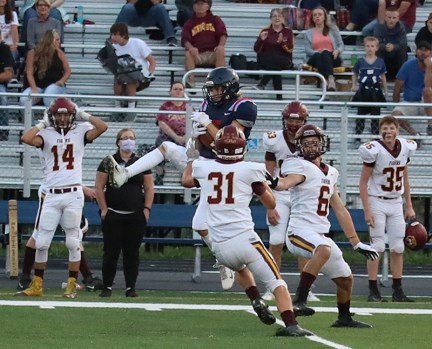 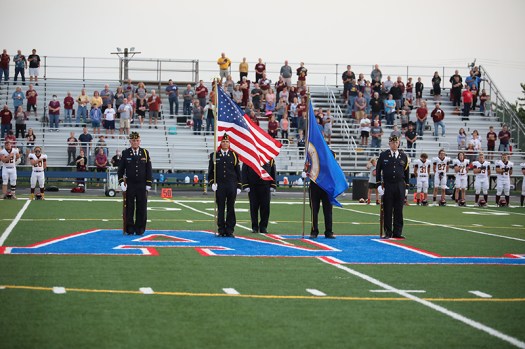 The color guard was on hand before the start of Saturday's game between Albert Lea and Stewartville. Kelly Hendrickson/For the Albert Lea Tribune

Coming off a tough loss in week one, the Albert Lea football team played in its first home game of the season Saturday night, hosting Stewartville.

After forcing a Stewartville turnover on the first possession, Albert Lea looked to be up to the task of keeping up with Stewartville. However, the firepower of the Stewartville offense was just too much for Albert Lea to match, falling 56-0.

Stewartville took the opening kickoff and marched down the field, getting into the red-zone before Luke Moller pulled down an interception, returning it to their own 26-yard line.

After a couple nice first down catches from juniors Tanner Conn and Logan Strom, Albert Lea committed a turnover themselves, fumbling the ball just after crossing midfield.

Stewartville took the momentum and ran with it, scoring the first touchdown of the game moments later on a 29-yard screen pass to go up 7-0 after the successful PAT.

Albert Lea was hit with another turnover on its next possession, giving the ball to Stewartville on the 36-yard line. Stewartville made it a two-possession game a few plays later using a 23-yard pass to go up 14-0 with less than a minute left in the first.

Heading into the second quarter, Albert Lea was forced to punt in three-and-out scenarios on back-to-back possessions while Stewartville scored quickly after those punts to go up 28-0.

Stewartville scored on three more possessions in the half, while Albert Lea’s three possessions ended with a fumble, interception and punt.

Stewartville went to the halftime break with a 50-0 lead over Albert Lea.

While Albert Lea’s defense was able to keep Stewartville out of the endzone for the most part in the second half, the offense continued to struggle against a tough defense. Albert Lea found themselves inside the five-yard line midway through the fourth quarter, but the drive stalled and Stewartville forced a turnover on downs.

Junior Dakota Jahnke was the leading passer for Albert Lea, connecting on 12 of 20 attempts for 86 yards. Senior Garrett Giles also completed one pass on a halfback pass for 37 yards.

Junior max Edwin led in rushing with 23 yards, and Strom led the team in receiving with four receptions for 51 yards. Moller had two receptions for 45 yards.

Defensively, Strom led with five tackles, while Giles had four. Moller recorded the one interception for Albert Lea, and Edwin and Trenton Mikels combined for a tackle for loss.

As a team Albert Lea gave up 416 yards of offense, while compiling 126 yards themselves.

Albert Lea falls to 0-2 to start the season and they will be back on the field Friday when they travel to take on the Wingers of Red Wing.