Brooke Nicole Woitas Gulbrandson, age 34, of Albert Lea, passed away on September 21, 2021 after the most courageous battle against a barely pronounceable cancer- cholangiocarcinoma (bile duct cancer). 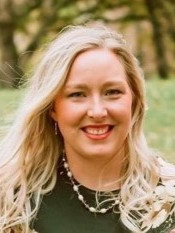 Thanks to the Lou-Rich Christmas party, Brooke was born on September 3, 1987 in Albert Lea. Her youth was full of swimming, camping, sports, life-long friends and family. These activities ultimately led to her marrying the boy next door, Lee Gulbrandson.

Being athletically gifted, she excelled in volleyball and basketball. She could post up with the best of them and watch out for her elbows after she came up with the rebound. The love of volleyball carried through her entire life. She played 6 days a week throughout college, participated in several leagues after college graduation and even played far into both pregnancies. She also coached many levels of volleyball for Albert Lea Schools.

Brooke graduated from Mankato State University with a bachelor’s degree in sports marketing and management. This is where she and Lee’s childhood friendship turned into love. They were wed at a fantastic shindig on October 13, 2012. Their marriage included dancing, camping, the love of the Freeborn County fair and all that it has to offer, motorcycling and building their dream home on Lee’s family land. The best part of their marriage was bringing the two most wonderful children, Gracyn (4) and Garth (1) into this world. She was a devoted mother and loved her children dearly. They are the center of her world.

Brooke’s other passion, besides volleyball, was baking. If you were smart enough to order one of her creations, you were not only given the gift of delicious tasting confectionery, but also a stunning piece of art (flamingo, Harley Davidson gas tank, pumpkin, loot llama- to name a few). She had a talent to take the vague idea her customer gave her and turn it into something spectacularly perfect.

Those left with her in their hearts are her loving and strong husband, Lee Gulbrandson, her two precious children, Gracyn Louise and Garth Daniel. She will be missed by her parents, Scott and Kim Woitas and her in-laws, John and Denise Gulbrandson, her sister and family Brie-Anne (Woitas), Matt, Wynn and London Tubbs and her sister-in-law and family Candy (Gulbrandson), Rick, Cooper and Teddy Fuzesy. Her grandparents, Ron and Shirl Woitas and Lou and Stephanie Larson are also left to cherish her memory. When one dies young, she also has many aunts, uncles, cousins, and friends around to carry her memory. She will also be remembered by her volleyball family, Northwestern Mutual employer family, Hy-Vee family, Lou-Rich family, East Freeborn Churchand Hayward Lutheran Church families.

Those meeting her in heaven are her maternal Grandmother, Sally Larson, Danny Gulbrandson, Alice Gulbrandson and all of her great grandparents.

In lieu of flowers, memorial are preferred because Brooke and Lee’s cat, Jack, eat the flowers and then pukes them up or to Arcandian Bank in Albert Lea.

Celebration of Life was held on Sunday, September 26, 2021 at The Barn of Chapeau Shores, Albert Lea, MN.