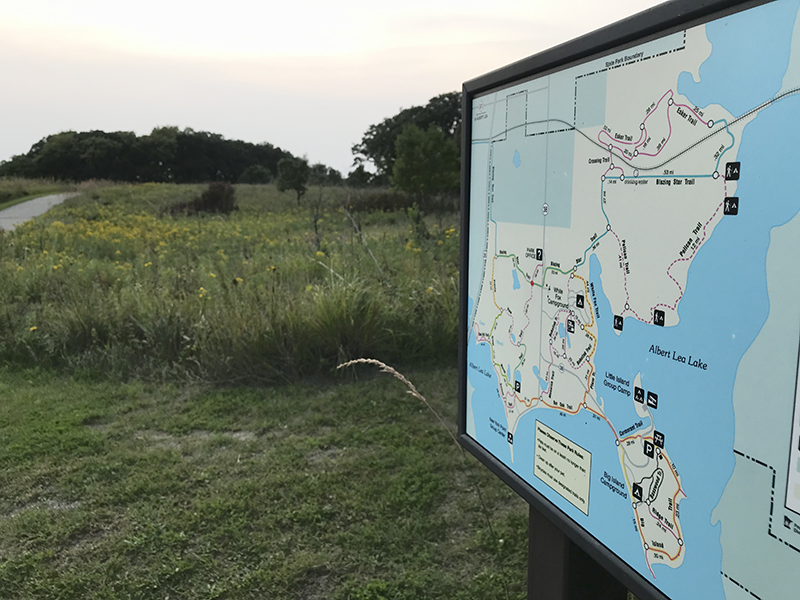 A Minnesota Department of Natural Resources representative on Monday pledged the agency’s support in completing the extension of the Blazing Star Trail over Albert Lea Lake to connect the trail from Albert Lea to Hayward.

During a public meeting at Edgewater Park Pavilion about the project, Scott Haugen, with the DNR’s Parks & Trails division, said there is presently $2.9 million from state and federal sources in place for the project, which includes installation of a bridge over Albert Lea Lake, wetland mitigation, paving gravel sections of the trail at Myre-Big Island State Park and repaving other portions of the trail.

All of the work is scheduled to be completed by fall 2024.

A few people in attendance at the meeting questioned whether mitigation work could be done after the bridge is built to ensure that the bridge is completed.

District 27A Rep. Peggy Bennett said the community had been told previously that there was enough funding in place for the whole project, and it found out later it was not.

The Blazing Star Trail was authorized by the Legislature as a state trail in 1996 with plans to connect Albert Lea to the state park, Hayward and eventually the Shooting Star Trail in Austin.

The figure-eight portion of the trail off of Front Street was completed by the city in the 1990s, with the extension to Frank Hall Park in the early 2000s, Haugen said. In 2003 and 2004, the city and DNR completed four trail miles to the state park. Work has also been completed on the Hayward side of the trail, and the main part left of the trail that remains is the crossing over Albert Lea Lake to connect the two sides of the trail.

Haugen said the DNR is planning to complete the remainder of the work as efficiently as possible with the least amount of disruption, and noted that with the trail receiving funding from three separate sources, it is a top priority for the DNR.

“The DNR will find any possible way to fund this,” Haugen said of if there was a shortfall in funding.

He said the bridge is slated to be built about 50 feet away from the existing rail line over Albert Lea Lake. Haugen said currently the plan calls for putting fill strips in the lake for the bridge. The plan has to be approved not only by the DNR but the U.S. Army Corps of Engineers.

Because portions of the lake would be filled in to put in the bridge, the DNR will need to replace the wetlands lost to comply with laws aimed at preserving wetlands.

To do this, he said the DNR is proposing to expand the wetlands at the city’s portion of the Blazing Star Trail off of Front Street. The proposal, which still needs to be approved by the city of Albert Lea, would take out a small part of the trail, making one large loop around expanded wetlands.

Specifically, plans call for removing the east portion of the fill strips built in the center of the figure eight and expanding the marsh there. A precast box culvert would be installed, and then the small and large loops would be connected by a bridge he estimated would be about 60 feet long adjacent to Albert Lea Lake.

He said the trail would be closed for a short time to complete that work.

Construction of the trail bridge is expected to start in 2023 and conclude in summer or fall of 2024.

Extra seat belt patrols happening through end of the…