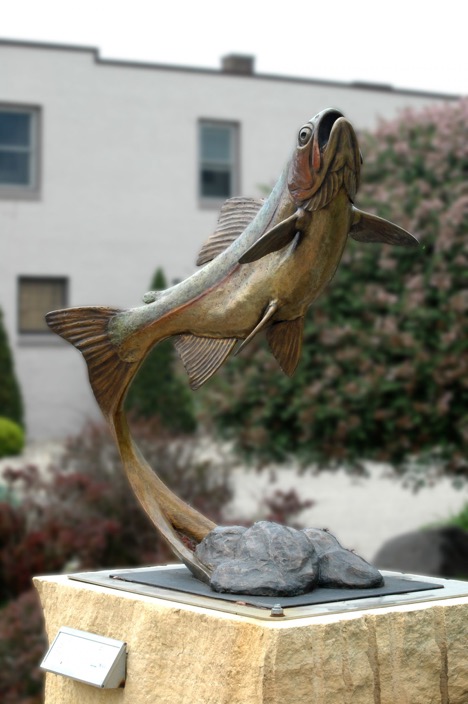 The sculptures would each be mounted to a Kasota rock base at the various locations in the community like this example. Provided

The Albert Lea City Council on Monday heard plans for a sculpture walk in Albert Lea as part of an ongoing effort to bring in public art to the community.

Holly Karsjens, executive director of the Albert Lea Main Street Program, which oversees Art Walk Albert Lea, said a sculpture walk has been on the list of projects for the program since ArtWalk Albert Lea started in 2020.

“We had to prioritize our projects and different sectors of public art,” Karsjens said. “We felt starting with murals would be the highest impact option. After finishing the warming house murals at both Lakeview and Academy parks over the last two summers, and sprinkling the beautiful metal snowflake sculptures in our flower pots downtown, it’s time to start the next phase of public art, a sculpture walk.”

The effort involves, first, the installation of Kasota stone bases on which the sculptures will be mounted.

Karsjens said the group would like to start with six and build up to 20 by 2022. The rock bases would stay year-round, and the sculptures would be swapped out each year.

Sculptures could be from local artists, and she noted there is also the opportunity for traveling art between several communities.

She said the estimated cost for the six initial bases is $4,000, which also includes plaques for base sponsors and engineering preparation for future art installations. The expenses are being covered by community sponsors and a portion of the annual Main Street Project funds. Additional community support will be needed for the remaining 14.

Karsjens said the six starting bases are planned to be in the following locations:

• In front of the Freeborn County Arts Initiative

• In front of the Albert Lea Art Center

• At the top of Fountain Lake Park

• At New Denmark Park in the green space by the garden

The initial six bases will be purchased this year and installed in late spring, and the bases will ultimately be donated to the city, with Art Walk Albert Lea overseeing the seasonal art walk and sculpture selection.

Karsjens referenced other successful art walks in Mankato and Clear Lake, and councilors Larry Baker and Jason Howland talked about how much people have enjoyed the ones in Mankato.

“It would surprise you how many people view the art and take the tour,” Howland said.

Mayor Vern Rasmussen also applauded the project and said he thought it would be a good addition to the community that would drive tourism.

Karsjens said there will be a map, details about each sculpture including the artists and purchasing information when applicable on each sculpture.

Look to the Tribune for more information from the meeting.