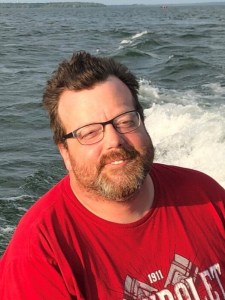 Mark graduated high school from Albert Lea High School in 1994. His senior year in high school, Mark enrolled in the Army National guard. He was a member for six years. He graduated Alexandria Technical College in 1996, with a degree in law enforcement.

Mark starting working at a young age doing a shopper route. From there he worked at Hy-Vee in Albert Lea. He had various jobs after college before working at Freeborn County Jail. He then worked as a deputy sheriff in Mower County and LeRoy. His most recent job was a dump truck driver for Falkstone in Northwood, Iowa.

Mark had a strong work ethic but even stronger family values. Nothing meant more to him then his family. There isn’t anything he wouldn’t do for those he loved.

Mark’s hobbies included woodworking, playing games on his phone, tinkering with computers, movie nights with his family, fishing, camping and having fires in the backyard with his kids.

Mark had a love for all animals and was known to rescue a few.

Mark loved life and lived it to the fullest. He loved teaching his kids new things. He always had a practical joke and was full of stories such as his “famous Georgia Watermelon” story.

Mark will be deeply missed by all who knew him.