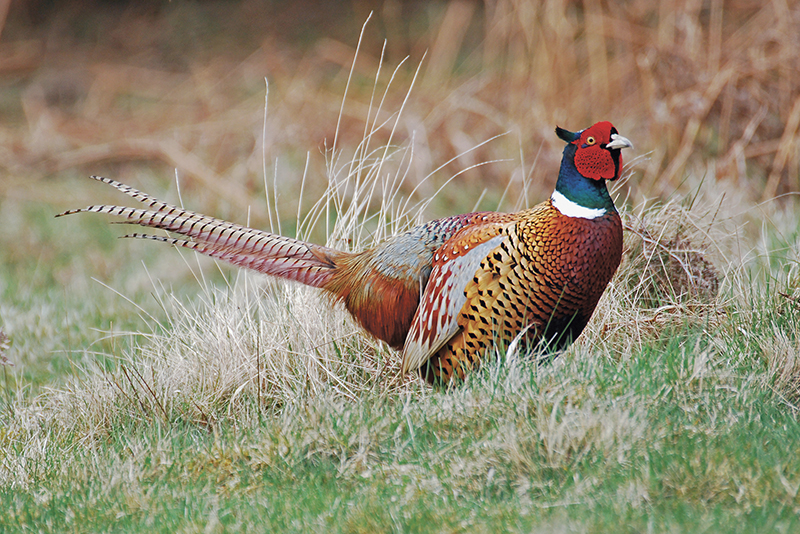 Pheasant numbers saw a decline after this. year’s August roadside survey, conducted by the Minnesota Department of Natural Resources. However, despite a 25% decrease, it equals out to a minimal decrease that remains closer to the 10 year average.

The Minnesota Department of Natural Resources recently released the results from its annual roadside survey and the overarching conclusion is that not much has changed.

Throughout the southern and central part of the state, 163 25-mile routes were surveyed from July 31-Aug. 22 and what researchers found was that bird numbers remain close to the 10-year average of 37.7 birds per 100 miles, despite showing a decline in most areas.

The pheasant index registered 40.7 birds per 100 miles for a 25% decrease from last year (54.5 birds/100 miles). However, Tim Lyons, a DNR farmland wildlife researcher said that it doesn’t represent that much of a change.

The question mark hovering over this year’s count is what effect the drought may have had on broods. While conditions were optimal throughout the winter (save for a snap in February) and the breeding season, DNR officials admit that the drought that followed could have had an effect, though how much of an effect is unclear.

“It’s really hard to know,” Lyon said. “I spent four years tracking pheasants in Illinois and I still have no great sense on how it affected them.” 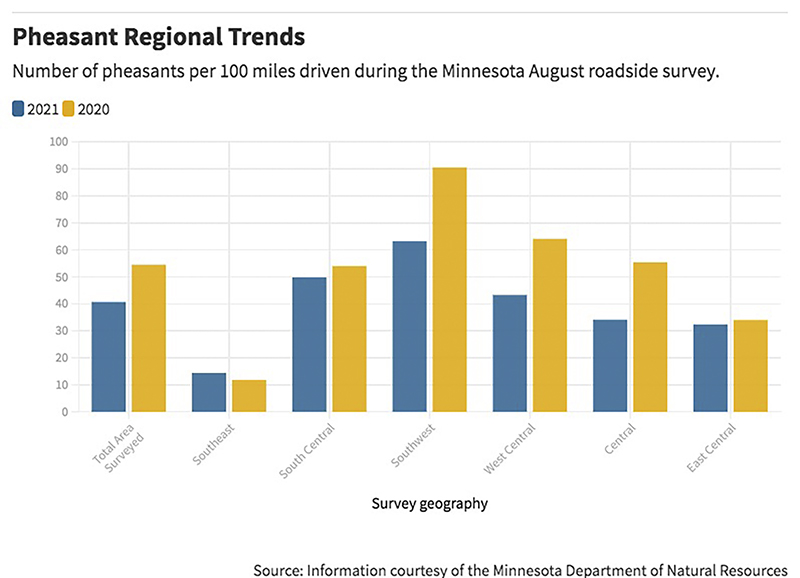 Lyon also said that reports coming to the DNR from citizens in the southwest corner of the state are reflecting a difference between the survey and what’s being seen on the ground.

In southeast Minnesota, in which Mower, Freeborn, Dodge and Steele counties were included, pheasant numbers saw a slight uptick of 22%, marking the only place in the surveyed area that saw an increase.

Which leads into another question — how did conditions during the survey affect observation of the count?

Between the drought, there was a good deal of overcast skies during the survey as well as smoke drifting south from the wildfires in the north, These in turn made gauging an accurate count more difficult this year.

Hens and chicks will come to the roads to dry off in the sun from the morning dew, but with cloudy skies or smoke obscured skies, thus there was less incentive for the birds to move to the roads, possibly affecting the count.

What this all means for pheasant hunting this year, which begins Oct. 16, is that despite the conditions and the very slight drop in numbers, the southern part of the state still has some good hunting opportunities.

“The southwest, those four counties in the corner around the Marshall area, that’s traditionally been the best,” Lyon said. “I’m a person from Illinois with even fewer opportunities and birds. Bird numbers in the south central region showed the least decline and they are among the top three hunting areas in the state.”

However, for a broader snapshot down the road, Lyon said how numbers develop will come down to one thing.

“It comes down to access to land,” Lyon said.

Offsetting that, however, was an increase in land enrolled in the Conservation Reserve Enhancement Program (CREP) and Reinvest in Minnesota (RIM). The state saw increases in those two areas of 10,000 and 2,000 acres respectively.

The future could rest in those last two areas, as well as Walk-In Access areas, which to date features more than 250 sites totaling more than 30,000 acres.

“The nice thing about these other ones [CREP and RIM] is these are permanent habitats,” Lyon said. “It’s probably why CRP is as popular as it is. Farmers can choose to farm the lands in 10 years. It also means habitat isn’t permanently there.”