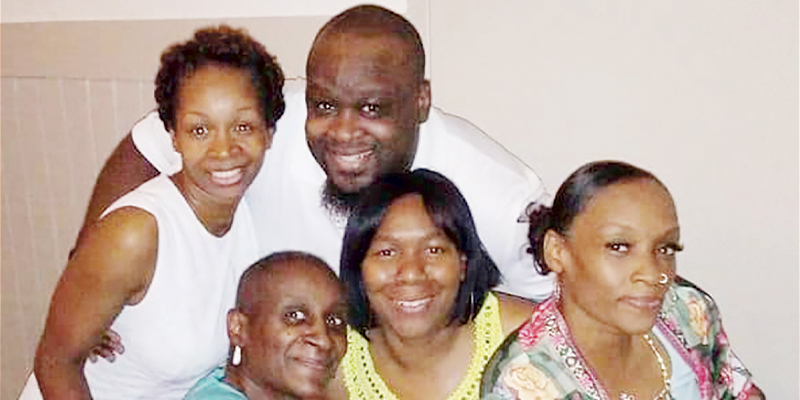 David Harris is pictured with sisters Anjeliek Comeaux, Danielle Moore, Erica Jeffers and cousin Ola Lloyd. Harris was revealed to be the victim in a June shooting. Photo provided

Admitted to being at residence when shooting occurred

A second suspect believed to be involved in a June 5 incident that left an Austin resident dead made his first appearance on Wednesday in Mower County District Court.

Court documents state that police responded to a report of a shooting with multiple injuries at about 1:10 a.m. on June 5 in the 100 block of 12th Street Northeast of Austin. Once on scene, an unknown subject stated there was a man upstairs that was shot “four” times and “bleeding” out. An officer entered the residence and located David Harris, 45, who was on the floor with three bullet wounds in his chest and a pistol lying next to him. Emergency personnel attempted lifesaving efforts, but Harris was pronounced dead at the scene.

An adult female at the residence told police the pistol found next to Harris belonged to her and that Harris had been shot trying to “save the boys” [Victim A (an adult male) and four juvenile males] from suspects trying to rob them of marijuana. She described one suspect as a Hispanic juvenile male (Suspect A) from Albert Lea.

Victim A told police that he had wrestled with a suspect and had cut his arm on some glass from a broken window; however, he later advised that the wound was a bullet graze.

One of the juvenile males was shot in the leg during the incident and was transported to Mayo Clinic Hospital, St. Marys Campus-Rochester.

Victim A told police the suspects came to the house to buy marijuana. He identified Suspect A as the person who set up the sale for the shooter, later identified as Miguel Nunez Jr. He told police he saw Nunez start to walk into the house with one or two of his friends. Another suspect, later identified as Forrest, attempted to enter, but was told “no.” Victim A described Forrest as a dark-skinned Black male wearing a gray hoodie, gray sweatpants, and a black hat with a handgun and extended magazine.

Victim A then said that only one of the suspects (Nunez) came into the house to buy marijuana. He said while he was weighing out marijuana Nunez pulled a pistol out of his waistband and said, “Give me everything or I’ll shoot everybody.” He said he told Nunez to “just take it” and then Harris opened the bedroom door. Victim A said Nunez started shooting at Harris and Harris started shooting back. Nunez unsuccessfully tried to jump out the bedroom window and cut himself. A dog at the residence then bit Nunez, who dropped his gun and ran out of the house.

Two of the juvenile males said they saw three individuals walking through the neighbor’s backyard. One of them alerted Harris, telling him, “I think we’re going to be robbed.” He said Harris got a pistol and went into the room, where he was shot by Nunez.

Prior to the shooting, one of the juvenile witnesses said when Forrest was told he couldn’t go into the house, Forrest lifted up his shirt and put his hand on the grip of a pistol, which he described as small with an extended magazine. Witness B indicated that he put his hand under his shirt and pretended like he also had a gun, after which Forrest told him to “chill” and then walked toward the side of the house.

He told police that when the shooting started, he went down the stairs and to a back bedroom and heard gunshots coming from outside the house and someone kicking the door.

Police spoke with Suspect A, who reported that the suspected gunman was a male known to him as “Spazzo” (Nunez). He also said that another person he knew as “Money” (Forrest) was in the vehicle (a dark-colored Jeep) with a female. He indicated that “Spazzo” and “Money” were both from Sioux Falls.

During a meeting with law enforcement at the Minnehaha County Sheriff’s Office, Forrest provided a DNA sample and said that he drove to Suspect A’s residence in Albert Lea with Nunez and a juvenile female on June 4. He said that he knew where they could rob marijuana from subjects in Austin and that Suspect A got a message on his phone with an Austin address where they could commit the marijuana robbery.

Forrest said he drove to the location with Nunez, Suspect A and the juvenile female and parked across the street from the house. He said they talked about not committing the robbery because they saw several people standing out in the front yard of the house, but Nunez acted like he was not afraid and got out of the car and walked up to the guys at the house. Forrest indicated that he and Suspect A then walked to the house and Nunez went into the house with some of the guys who were outside. Forrest said he was prevented from entering the house by one of the guys in front, and walked back to the vehicle with Suspect A, after which they heard the gunshots. He then saw Nunez running and said that Nunez got in the vehicle and said he was “hit.” Forrest said he dropped Suspect A off at his home in Albert Lea, then drove back to Sioux Falls and dropped Nunez off on the north side of the city.

Forrest called the detective again on June 17 and said that Nunez had an injury to his hand and had it wrapped in a shirt or jacket when he dropped him off in Sioux Falls. He said he wanted to drop Nunez off at a hospital, but Nunez told him “no.”

Forrest denied that his DNA would be on the gun that Nunez brought to the house, but indicated that he bought a pistol, which he described as a 9mm or .380 caliber with an extended magazine. He said he sold the gun when he got back to Sioux Falls and denied shooting the pistol at the front of the house.

Forrest also said his cousin “G Money” met him at Suspect A’s house in Albert Lea and then drove in another car to the house in Austin. He said he did not know where “G Money” parked his car, but he met with him and Suspect A as they were getting out of their car. Forrest said they then approached the house from neighboring backyards and said he lost the other two because it was dark. He later found Suspect A and the shooting began as they walked into the front yard.

Forrest will appear in court again on Sept. 23