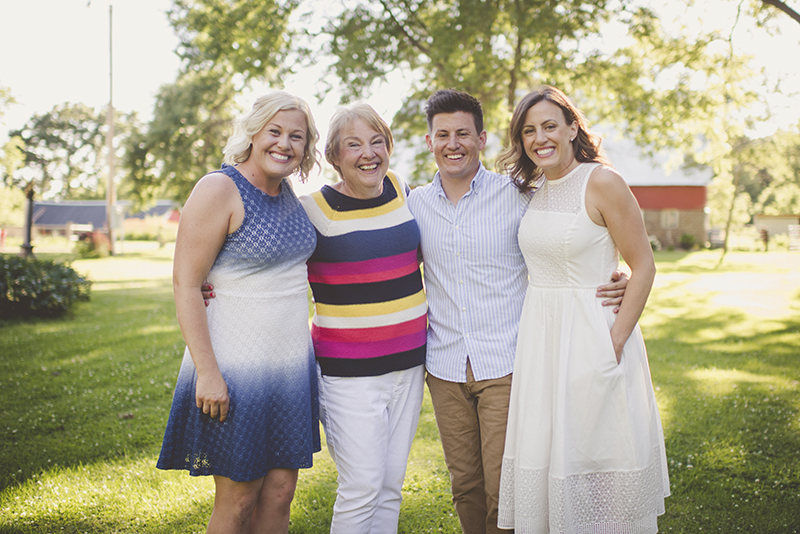 Ruth Breuer stands with her children in a photo. The family is being honored this year during the Walk to End Alzheimer's in Albert Lea Oct. 2. Provided

Family honored for Walk to End Alzheimer’s shares their experience

Sisters Natalie Ouska and Stephanie Breuer like to remember their mom as the creative, happy, nurturing woman she was before Alzheimer’s disease entered their family’s lives.

“Her No. 1 priority was her friends and family,” Ouska said of her mother, Ruth Breuer.

Their mother and father, Jon, lived on an acreage right outside of Albert Lea, and she enjoyed gardening and loved being social. Their brother, Jonathan, was an athlete, and their mom would enjoy watching his sports events.

“And then it all started to kind of change,” Ouska said of her mother about 10 years ago when she was about 52 years old. “You’d notice little things about her personality that changed. She started to become really negative. She sort of became withdrawn and wasn’t comfortable with going out.”

Ouska said there was probably about a two-year period where those types of symptoms were sprinkled throughout daily life, but then they became more prevalent as time went on.

At first the family had expected her to receive a diagnosis of depression, but ultimately, about eight years ago, when she was about 57, she received an official diagnosis of early onset Alzheimer’s disease.

“It started to make sense because the symptoms are very similar to depression, so that’s why it’s easily confused and it’s challenging for families to get an official diagnosis,” Ouska said.

For five years, her father remained her mother’s primary caretaker, and she was still able to be alone at times. As time went on, however, he hired a caretaker to take care of her during the day while he continued working. He took care of her in the evenings and on the weekends.

“It became too much for him in the sense that she was declining pretty quickly and was getting herself into unsafe situations,” Ouska said. “It became obvious that the next logical step was for her to move into a full-time care facility.”

Three and a half years ago, their mother moved into Prairie Senior Cottages after the family had heard positive things about the memory care facility.

Since that point, the progression of the disease has continued gradually.

“It’s such a slow progression — this disease,” Ouska said. “It’s been very gradual but very consistent.”

The sisters said their mother has not known who they are for 3 1/2 years. Up until about a year and a half ago, even though she did not know who they were, it was clear she still loved them by seeing her response when she saw them.

“It’s been very difficult,” Breuer said. “It’s just a long process. It’s not one of those heartaches that you endure and you have time to grieve and move on. It’s just this ongoing, painful process.”

Ouska said she at times has had to limit seeing her mother because the pain was so excruciating it started being detrimental to her own mental health.

The sisters said they have taken part in the Walk to End Alzheimer’s in Albert Lea the last few years, and this year they are being recognized as the walk’s honorary family.

The sisters encouraged people to come out and participate.

“With so many diseases, you feel so helpless as a family member that you can’t fix it or you can’t change it, especially with Alzheimer’s because there isn’t a treatment, and you feel like your hands are just tied,” Ouska. “The one thing you can do is raise money and awareness to hopefully find something that will slow the progression.”

All funds raised through the Walk to End Alzheimer’s further the care, support and research efforts of the Alzheimer’s Association.