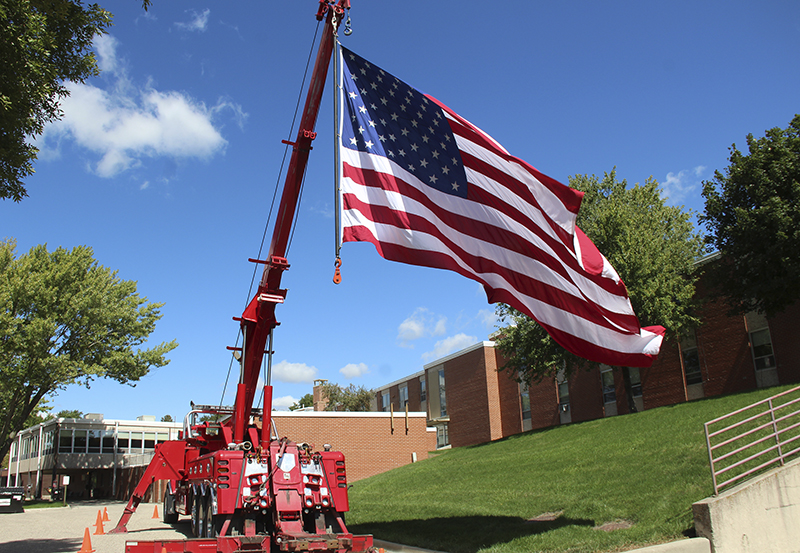 The American flag hangs from a tow truck through T&W Towing Wednesday in front of the St. John's Lutheran Community campus off of Minnesota Highway 13. Sarah Stultz/Albert Lea Tribune

An Albert Lea towing company is looking to give back to the community through a new service that also celebrates the nation.

T&W Towing co-owner Dustin Tramm said the company purchased a large U.S. flag — approximately 20-by-30-feet — before the Third of July Parade and is now offering to fly the flag for free off of its rotator tow truck to honor veterans. It is also able to fly the flag at no charge for events as long as the truck is available, he said.

So far, the flag has flown at the St. John’s Lutheran Community campuses, at Carquest Auto Parts and at an event at Edgewater Park. This weekend is expected to be particularly busy with 9/11, and the flag will be flown during the Albert Lea 9/11 remembrance parade with the police and fire departments, at an event at Bergdale Harley-Davidson and in Hollandale. 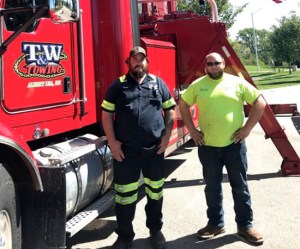 Dustin Tramm, co-owner of T&W Towing, at right, and David King stand next to the company’s rotator truck that was flying the U.S. flag. Provided

“We’ve heard people say it looks really good and we’re happy to see stuff like that out, and they want to see it more,” Tramm said.

He said the effort is part of the company’s focus on the community.

“We’re not here just to make a profit,” he said. “We’re here to give back to the community.”

The rotator truck that the flag flies from, he said, is the only one in the area and the first rotator to actually call Freeborn County home. The equipment is used in cases of heavy recovery and is similar to a crane but can hold a much larger amount of weight.

Tramm said he is originally from the Bricelyn area and came back to south-central Minnesota eight years ago after some time away in North Dakota. He now lives north of Albert Lea and serves on the Manchester Fire Department.

He said a few years after being back, he and his wife saw an opening in the towing industry in the area and decided to start their company.

T&W Towing, which has been in Albert Lea for five years, has nine employees and is in the former Sorensen Bros. building at 2046 Sorensen Road. It recently was awarded the city’s towing contract.

Tramm said T&W will have a customer appreciation event from 11 a.m. to 6 p.m. Sept. 22 with free food and drinks and a bounce house for children.