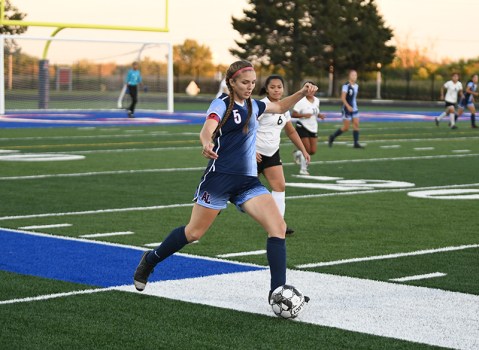 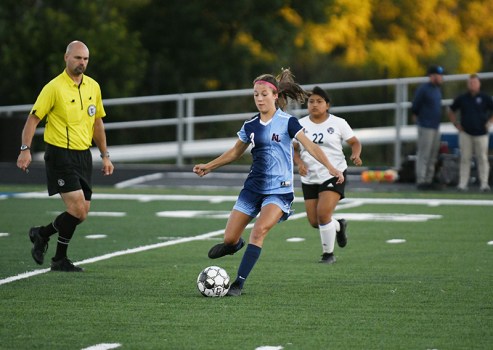 Sophomore Morgan Luhring races toward the net Friday against Worthington. Luhring score the Tigers second goal of the game with just under 10 minutes left in the match. Tyler Julson/Albert Lea Tribune 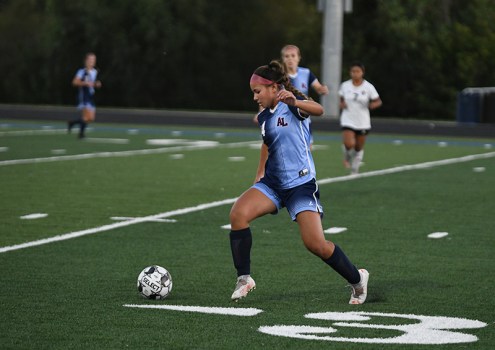 Lucy Stay brings the ball back on Worthington's half of the pitch. Tyler Julson/Albert Lea Tribune

While the match was close for the majority of play, Albert Lea scored two late goals to come away with the victory, 3-0.

Although the score remained tied for nearly 15 minutes in the first half, the Tigers were in control of the ball for much of those 15 minutes. Senior Abby Chalmers took the first shot on goal of the game four minutes into play. The ball was struck well, but the Worthington goalie made the save to keep Albert Lea off the scoreboard.

Sophomore Morgan Luhring came close just over a minute later, but again, the Worthington goalie was there for the stop.

Junior Kailey Boettcher found herself with a good look at the goal with about 32 minutes left in the half, but the goal sailed just over the crossbar.

Then, with just over 25 minutes to play in the half, Luhring took a shot that was blocked back into play by the Worthington goalie. Junior Kendall Kenis was ready for the ricochet as she took possession and kicked the ball in for an easy goal, taking a 1-0 lead.

Albert Lea was never in much danger of giving up a goal to Worthington through the remainder of the half, as the ball spent most of the time on Worthington’s side of the pitch. When the ball did cross the midfield mark, Albert Lea’s defensive front of junior Brie Beasley, and seniors Lindsey Bizjak and Lucy Stay quickly sent the ball back. The Tigers had a number of corner kicks in the first half, all of which barely missed the mark.

Albert Lea went to halftime with a 1-0 lead.

The match played much the same in the second half. While the ball did spend more time on Albert Lea’s half of the pitch, it never seemed like the Tigers lost possession for any significant amount of time.

Junior Makenzie VanderSyde and Kenis each had a shot that came close to finding the back of the net in the opening 20 minutes of the second half, but the score remained 1-0 as VanderSyde’s shot sailed just right and Kenis’s shot was saved by the goalie.

With 17 minutes left to play, Luhring hit a header on a corner kick from Chalmers, and the attempt sailed just over the crossbar. Then about a minute later, Luhring found an open look at the goal, but Worthington’s goalie was again there for the stop. She finally found her shot with just over nine minutes remaining in the match, hitting a shot from the right side of the pitch that sailed to the left of the goalie, giving Albert Lea a 2-0 lead.

Kenis added another goal three minutes later, all but securing the victory for Albert Lea.

The Tigers climb to 2-6 this season and will be back on the pitch Tuesday when they host Mankato West.