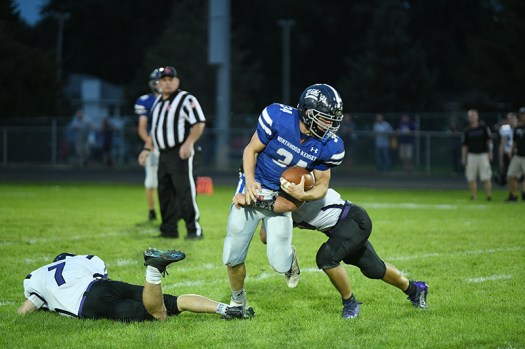 Northwood-Kensett senior Drake Tiedemann gets by one tackler before meeting another Friday night at home. The Vikings lost the game to fall to 2-1 on the season. Tyler Julson/Albert Lea Tribune 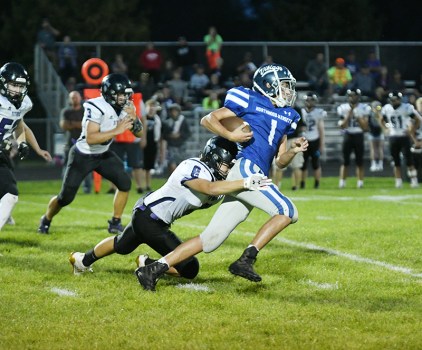 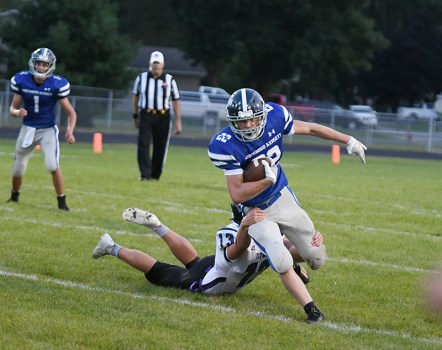 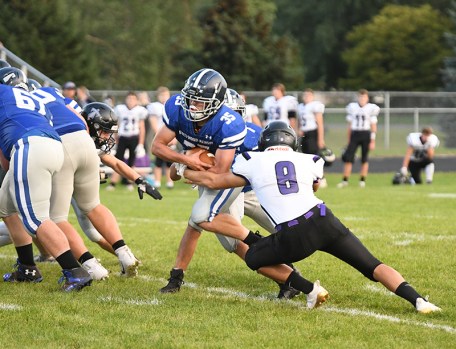 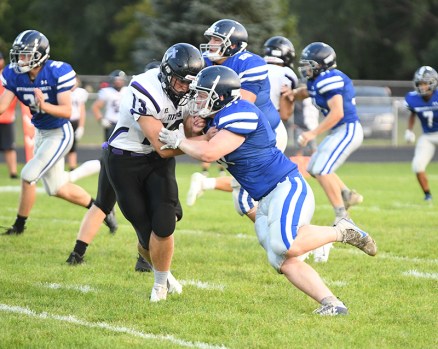 While the Vikings stuck with the Titans through much of the first half, the big-play ability by the Titans was too much, leading to the Vikings first loss of the season 56-21.

GTRA wasted no time in going out and scoring the first touchdown of the game. After Northwood-Kensett put them in a 4th and 2 position, the Titans exploded for a 38-yard touchdown to go up 6-0 after a failed two-point conversion.

The Vikings answered right back with a touchdown of their own when senior quarterback Drew Wilder took a keeper 25-yards into the endzone. Logan Mayberry put the ball through the uprights to give the Vikings a 7-6 lead less than five minutes into the game.

The Vikings defense once again put the Titans in difficult positions on the following drive, but the Titans converted on a 3rd and 13 and a 4th and 5 to keep their drive going. A few plays after converting on fourth down, the Titans connected on a 15-yard pass play to take a 12-7 lead.

After a short kick, Northwood-Kensett was in good field position to take the lead once again, but an inopportune fumble gave GTRA the ball back, capitalizing on the turnover and scoring on a three-yard rush to take a 20-7 lead with just under 11 minutes remaining in the half.

Northwood-Kensett senior Josiah Kliment found an opening on the ensuing drive, bursting for a 35-yard touchdown run. However, a 57-yard rush by the Titans less than a minute later put the deficit back to two possessions.

The Titans took a commanding lead after a Northwood-Kensett punt, using a 20-yard touchdown pass to take a 36-14 lead with under three minutes before halftime. The Vikings surged back with a score of their own just before the halftime whistle after a two-yard pass from Wilder to Kliment.

The game went to halftime with a score in favor of the Titans, 36-21.

It was tough sailing for the Vikings in the second half. A punt in their first possession led to a GTRA touchdown, and after marching down the field on the ensuing possession, an interception ended the drive before they could get in the endzone.

The Titans scored twice more in the half, while the Vikings were held scoreless.

The Vikings fall to 2-1 this season and will be back on the field Friday when they host the Wolverines of West Bend-Mallard. 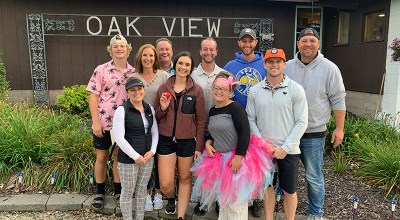