Albert Lea firefighter comes back from cancer in his brain 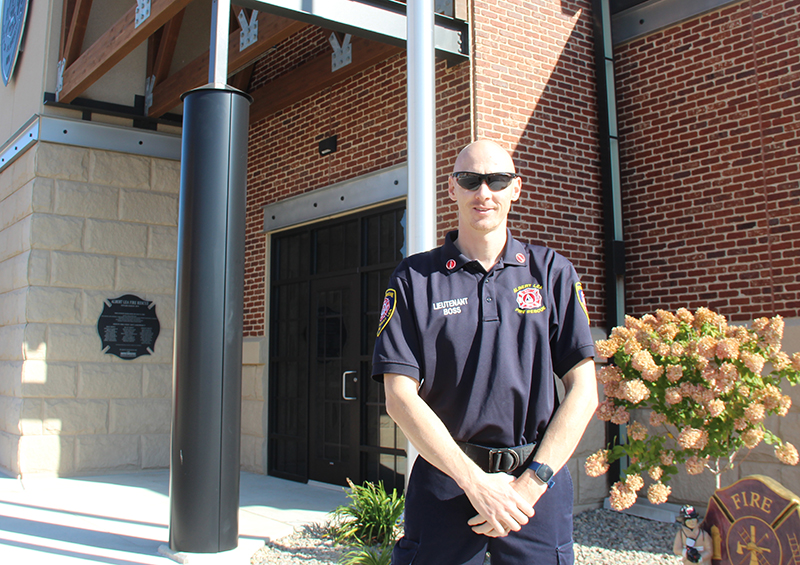 Brett Boss, lieutenant with Albert Lea Fire Rescue, stands outside of the fire station on Newton Avenue Tuesday morning. Boss earlier this summer underwent surgery after doctors found tumors in his brain. He was off for a few months during rehabilitation and is now back on duty full time. Sarah Stultz/Albert Lea Tribune

Seven years after he was first diagnosed with cancer, an Albert Lea firefighter recently battled his third stint with the disease — this time in his brain.

Brett Boss, a lieutenant with the fire department, began his journey with cancer in December 2014 after experiencing hip pain.

At first, he said he didn’t think much of it, but as time went on the pain kept getting worse and worse. Though he put it off for a while, eventually he said he went to a chiropractor and his regular doctor to seek answers and was later sent to a rheumatologist in Rochester. The rheumatologist ordered blood work and other tests, including a biopsy, but still came back with no answers.

Doctors then conducted a CT scan of his chest and found fluid around the pleural cavity of his left lung, tumors close to his heart and a mass close to the spine by his pelvis.

That’s when he received his official diagnosis of Stage 4 Ewing’s sarcoma, a bone cancer that typically affects children and adolescents and rarely occurs in adults over 30.

Boss said he went through 16 rounds of chemotherapy and several rounds of radiation to his chest and pelvis at that time. After completing his treatments, he was considered cancer-free in the summer of 2015.

In June 2020, scans found small amounts of the cancer in his lungs, and he underwent surgery to remove two lymph nodes and was off work for a month or two to recover.

Things again were going well following the surgery, he said, until this summer in June. Up in the Duluth area on a family vacation, he said he went hiking one day and came home and went to bed without any problems. He woke up in the middle of the night to go to the bathroom, however, and all of a sudden, he said he started feeling like he was having a stroke on his left side of his body.

“I couldn’t use (my arm) or move it, and the sensation was different,” he said.

He woke up his wife, Danielle, and told her what was happening. He also could not walk by himself and found if he did he would drift to one side and run into things.

He told his wife to call an ambulance. He said they were nowhere near a big city, so they had to intercept with a bigger ambulance, and before he knew it, he was being flown by helicopter to Rochester.

He said he does not remember much about that night, but knows that when he got to the hospital, doctors conducted a PET imaging scan and an MRI and found three tumors in his brain. The largest one, on the right side, was bleeding and causing swelling and had caused the left-side stroke symptoms. The other two on the left side of his brain were not causing immediate harm.

He was in the hospital for a few days to get evaluated, and then had surgery on his brain to remove the large tumor.

After a few days of healing following the surgery, Boss said he started physical, speech and occupational therapy in a rehabilitation unit to work on day-to-day tasks such as walking, feeding himself and getting dressed.

“It was hard. You see people do it all the time because I’m in that field, but until you’re in those shoes — this is no fun,” he said.

Every day, he said, the therapists would challenge him, pushing him harder and harder. At times it was a struggle learning how to walk again, as he battled with what his body was capable of doing and what his mind would try to talk him out of.

“Once you started going it was fine, but thinking about it, my memory was just lapsed — it’s a slower thinking process. You get frustrated. Your body can do it, you just have to go and do it.”

He ultimately started walking after a few days and while in rehabilitation went through different exercises such as going up and down stairs, getting in and out of a car simulator, walking on different terrains and even cooking on a live stove again. He also started doing some light workouts.

He also went through five rounds of radiation on his tumor sites and has done two rounds of chemotherapy and might continue more in the future.

“As of right now I took a break because I’ve just been going through so much,” he said. “I took a break from the chemo, but am still working out plans for what to keep doing for the next round.”

An MRI of his brain came back clear, and overall he is feeling well.

On Thursday he said he will go in for a CT scan and a PET scan of his whole body.

“Once I see my results from here, I’ll plan out the next steps,” he said. He said he was off work for three months and went back for a while on light duty before returning two weeks ago on full duty. “It’s nice to get back to a normal routine again,” Boss said.

As he awaits the results of his tests, he said he continues to conduct a lot of research on his own and is also working with Care Oncology Clinic out of California.

He also plans to seek a second opinion from the Masonic Cancer Center in Minneapolis, looking at options for his treatment.

His doctor has told him with his cancer coming back for the third time now, he might have to plan on chemotherapy for the rest of his life to keep the cancer away or come up with a new game plan.

Through it all, he said he continues to receive support locally and from his brothers and sisters in the state in the firefighting profession.

Steve Shapira, who is the state director for the Firefighter Cancer Support Network and was a former captain with the St. Paul Fire Department, started a fundraiser selling challenge coins to benefit Boss and his family.

Boss said some of the coins are still available, and if people are interested in purchasing one, they can reach out to Shapira on Facebook. Coins are $16.