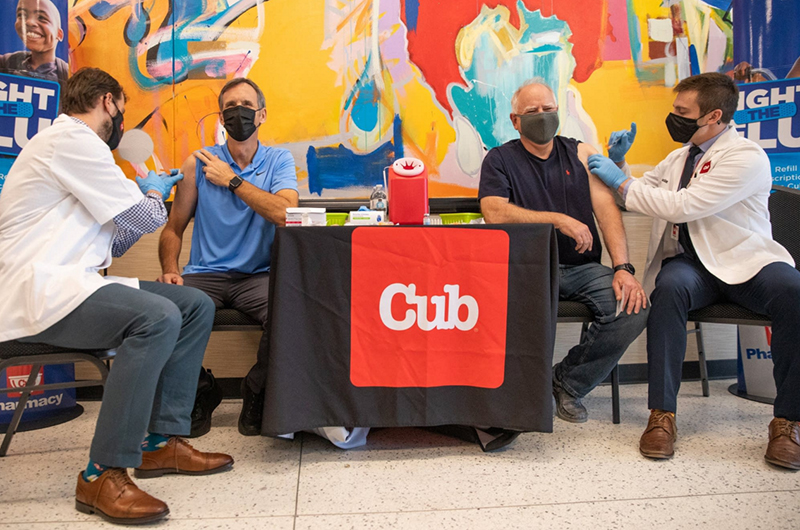 Pharmacist Jorid Keri, left, gives a COVID-19 booster shot to former Gov. Tim Pawlenty as pharmacist Mike Heaton, right, simultaneously gives one to Gov. Tim Walz in Minneapolis on Tuesday. They both initially got the Johnson and Johnson vaccine, but Walz opted for a Moderna booster while Pawlenty stuck with his original choice. Evan Frost/MPR News

Democratic Gov. Tim Walz and former Republican Gov. Tim Pawlenty rolled up their sleeves Tuesday while sitting side by side for a second time, in this case to get COVID-19 booster shots and urge others to follow their lead.

The duo went to a grocery store pharmacy in North Minneapolis to get supplements to the Johnson and Johnson shots they received in a similar event in March. Their goal was to promote the vaccines as the pathway forward, and it comes as health officials gear up to give shots to children as young as five.

Pawlenty urged everybody to seek them out.

“Please get your vaccinations if you haven’t already,” Pawlenty said. “Get your second one if you only got your first one. Get your boosters if you’re eligible. These vaccines are one of the primary ways out of the pandemic and we want to get out of this damn thing as soon as possible.”

Walz noted the booster shots are widely available and that experts have given the go-ahead to get a dose from a different pharmaceutical company than the original shot.

“I just want to encourage Minnesotans now. There is a broad ecosystem to get this done,” Walz said. “Remember that these are free and easily accessible.” Walz got the Moderna booster, while Pawlenty got a second Johnson and Johnson shot — “just to be different from Governor Walz,”

Pawlenty joked before saying he did it after some research on the effectiveness of the product. When asked about doubts raised about vaccines among Republicans and supporters of former President Donald Trump, Pawlenty said it doesn’t make sense.

“I hate to call it a miracle because it was science and it was hard work and it was logistics. To deliver these three vaccines is incredible. I would just own it,” Walz said of the Trump administration’s work to foster development.

People who had the single-shot dose initially are in line for boosters of any kind. There are eligibility criteria for people who had Pfizer or Moderna the first time around, but everyone 65 and older is eligible.

Even as they promote booster shots, state officials are still working to persuade vaccine holdouts to seek out initial doses.

And children ages five to 11 should soon be on the list of newly eligible.

The federal government is moving toward approval of shots for children of that age as soon as next week. The vaccines will come in smaller doses than those provided to people 12 and up.

Minnesota officials anticipate 170,000 child-specific doses of the COVID-19 vaccine to be in the state once the OK for those shots is given.

Pediatric clinics, pharmacies and other settings are expected to spring up quickly for the child doses once full authorization comes.

“We can literally begin vaccinating the next day,” Malcolm said. “We have got vaccine pre-positioned in locations all over the state. Pharmacies will play a large role; pediatricians, of course.”

She said health officials are also partnering with school districts and community groups to make it easier to find a shot. But parents who want to go through a doctor’s office will be able to, she said.

“Be patient if your clinic is not scheduling that minute,” Malcolm said.

Children have generally been less at risk of serious illness for the virus but transmission has remained a concern. Schools have seen disruptions amid spread.