Bulldogs postseason runs comes to an end in regional semifinals 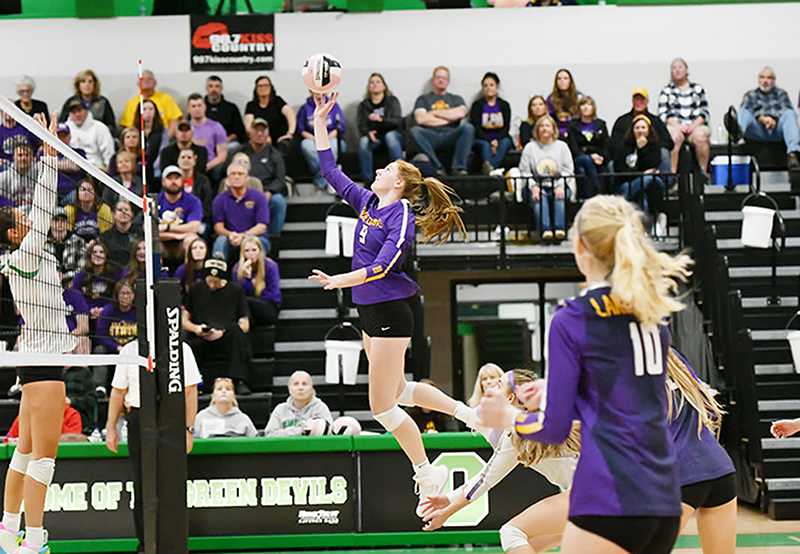 Lake Mills junior Ella Stene gets high above the net for a kill attempt Monday night in the regional semifinals against Osage. The Bulldogs dropped the match 3-0, ending their season. Lory Groe/For the Albert Lea Tribune

The Lake Mills volleyball team  hit the road Monday night for their Region 6A semifinal match against 27-9 Osage.

The Bulldogs struggled in the first set before losing a heartbreaker in the second, ultimately falling to the Green Devils in straight sets 3-0.

According to head coach Jim Boehmer, the first set started about as bad as it could have for the Bulldogs. They got into a big deficit and were unable to pull themselves out against a battle-tested team in the Green Devils.

Osage, last season’s defending state champion and moved down a class, went on to win the set 25-12. 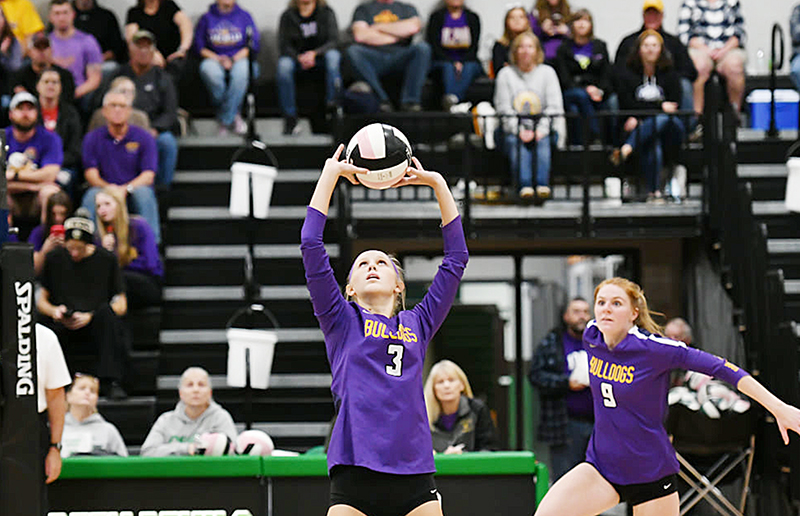 Senior Leah Moen sets up a teammate for a kill Monday night in Osage. Lory Groe/For the Albert Lea Tribune

“Our girls were working, but finding the floor on Osage is tough,” Boehmer said. “They have multiple All-Staters on their team and they defend the floor well.”

Set two started out much the same way for the Bulldogs, trailing 13-6, forcing Boehmer to call a timeout. Out of the break, the Bulldogs slowly started to claw back into the set, before eventually taking a 20-19 lead. The Bulldogs kept their rally going and found themselves with a formidable 24-21 lead. Unfortunately for the Bulldogs, the Green Devils had a run of their own left and went on a 5-0 stretch to claim the set 26-24.

Lake Mills came out in the third set emotionally drained from a tough loss in the second. Osage was riding their wave of momentum and won the final set 25-10.

The loss to Osage was the only loss to another Class 2A team on Lake Mills’ resume.

The Bulldogs end the season with a 33-5 record, a Top of Iowa West Conference championship and eight All-Conference players.

“I was pleased with how our three defensive specialists played,” Boehmer said. “Taylor Vanek, Erica Jordon and Natalie Brandenburg all played very well.  They had some great digs.  Offensively is where we just were not able to get any rhythm going. Osage forced us to play so much defense that we couldn’t get ourselves back in system quick enough to run any tempo ourselves or to force Osage out of system.”

The Bulldogs were led in kills by junior Ella Stene with eight. Junior Ellie Hanna had six and senior Brooke Bergo had five.

The team graduates four seniors from the lineup, including Jordan, Bergo, Moen and Kit Byars.