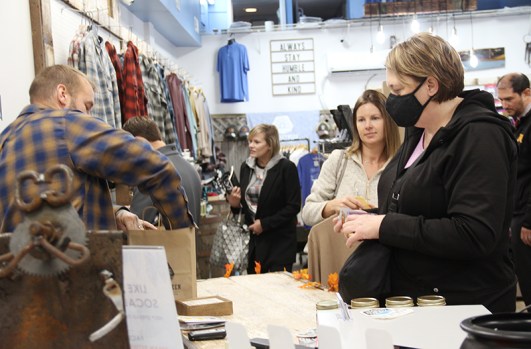 Albert Lea-Freeborn County Chamber of Commerce leaders and others take part in the monthly Chamber Cash Mob Thursday morning at Man Between the Lakes. The goal of the Cash Mob is to support local businesses and help boost sales that day. Participants also stopped at Between Friends Boutique. Sarah Stultz/Albert Lea Tribune 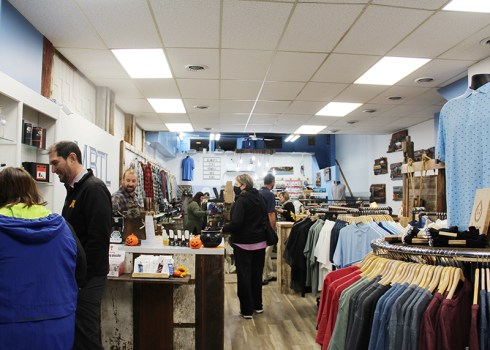 Participants in the Cash Mob look around the Man Between the Lakes store in downtown Albert Lea on Thursday. Sarah Stultz/Albert Lea Triubne 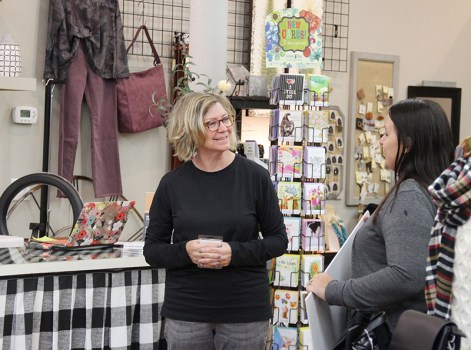 Becky Johnson, left, responds after finding out the Chamber Cash Mob would be in her business Thursday morning. Sarah Stultz/Albert Lea Tribune 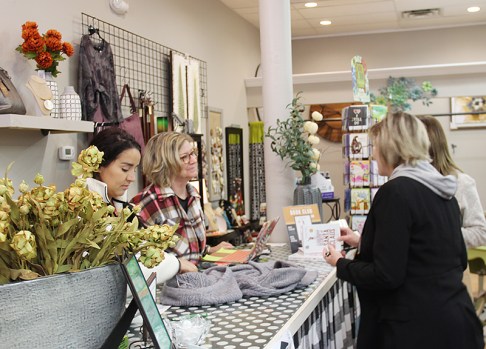 Between Friends owner Becky Johnson and an employee right up people Thursday morning during a Cash Mob at the store. Sarah Stultz/albert Lea Tribune 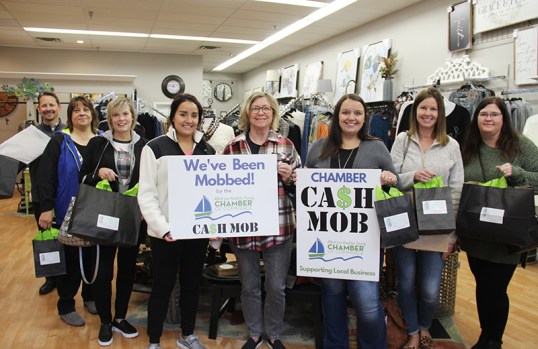 Between Friends Boutique store owner Becky Johson, a store employee and others who participated in the Chamber Cash Mob on Thursday pose with bags from their purchases. Sarah Stultz/Albert Lea Tribune

The Albert Lea-Freeborn County Chamber of Commerce has started a new monthly effort to boost sales of local businesses, while also having a little fun at the same time.

Through what the organization is calling a Cash Mob, people are invited to meet each month and shop at a set time at a pre-decided business — or businesses.

Chamber Executive Director Shari Jenson said she saw the idea for a Cash Mob on a chamber executive Facebook page. Other communities had success doing it, and she thought it was a good opportunity to support area businesses.

The local chamber started its first one at The Funky Zebras boutique in the strip mall near Walmart, and the second month went to Wintergreen Natural Foods.

Each month, the chamber shares the time and date for the Cash Mob with the chamber Ambassadors and then also shares it on its Facebook page. Anyone who wants to come is welcome. Once everyone arrives at a pre-decided meeting spot, then the chamber leaders announce what business they will be visiting that day.

“You want that element of surprise,” Jenson said.

She said this month they decided to visit two businesses instead of just one.

Participants met downtown at the North Broadway parking lot before stopping in first at Man Between the Lakes and then Between Friends Boutique.

Everyone who came for the Cash Mob walks in at the same time and announces what is taking place. Then, they take a few minutes to shop and pick out something to purchase.

When everyone is done shopping, they take pictures of everyone who came that day with their bags in tow, along with the business owner, to share on the chamber Facebook page.

“It’s exciting,” Jenson said. “It’s another way to give back and support businesses.”

Austin Perkins, who opened Man Between the Lakes with his wife, Miranda, in May, said he was appreciative of the visit.

“It’s crazy,” he said with a smile on his face. “It was the most customers I’ve had at once.”

He said he hoped the upcoming holiday season would be as busy.

Kim Flaa, manager of Wintergreen Natural Foods, which was mobbed last month, came along this month to pay it forward.

“It was awesome,” she said of when the co-op was mobbed last month. “It really gave us a boost. We needed it.”

Between Friends Boutique owner Becky Johnson, who has owned her boutique for seven years, said she was surprised and excited by the visit.

“It’s a wonderful way to expose your business for people who maybe haven’t been in before or noticed it when they drove by,” she said.

If people want to participate in a Cash Mob, they should look out for the announcement in future months on the chamber’s Facebook page.