Cleon L. Christenson, age 96, of Freeborn, MN, died Friday, October 15, 2021 at his home where he lived for 70 years. A Funeral Service will be held Friday, October 22, 2021 at 10:30 AM at Bruss-Heitner Funeral Home in Wells, MN with Pastor Chris Leistra officiating. Visitation will be Thursday, October 21, 2021 from 4:00-7:00 PM at Bruss-Heitner Funeral Home in Wells, and will continue one hour prior to the service at the funeral home. Burial will be in the Freeborn Cemetery. To leave online condolences, please visit: brussheitner.com 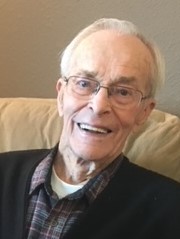 Cleon Laverne was born September 30, 1925 in Albert Lea, MN, the son of Clarence and Inga (Gilbertson) Christenson. Cleon graduated from Freeborn High School in 1943. He moved to California and worked from Northrup Grumman Aircraft for 4 years. Cleon returned home to run his own trucking business. He was united to marriage to Eleanor Dorothy Bruegger, Nov. 20 1954 at St Paul’s UCC Church in rural Minnesota Lake. After 20 years of self-employed trucking, he went to work for Hunnting Elevator in Freeborn driving the feed bulk truck for twelve years. Cleon retired in 1980 to farm for over 30 years. He was a member of the Congregational Church in Freeborn and served on the Board of Deacons. With more time on their hands, Cleon and Eleanor pursued their passion for Polka dancing. They were members of the Polka A’s Dancing Club, traveling throughout the United States attending Polka Fests, meeting and making new friends. They wintered in Arizona for over 19 years. They also loved to attend sporting events, cheering on their grandchildren. Cleon was a tireless worker, he enjoyed overhauling his tractors and working on numerous welding projects. He was still cutting firewood and mowing his huge lawn well into his 90’s. Cleon was a very kind and generous man; he will be greatly missed by family and friends.