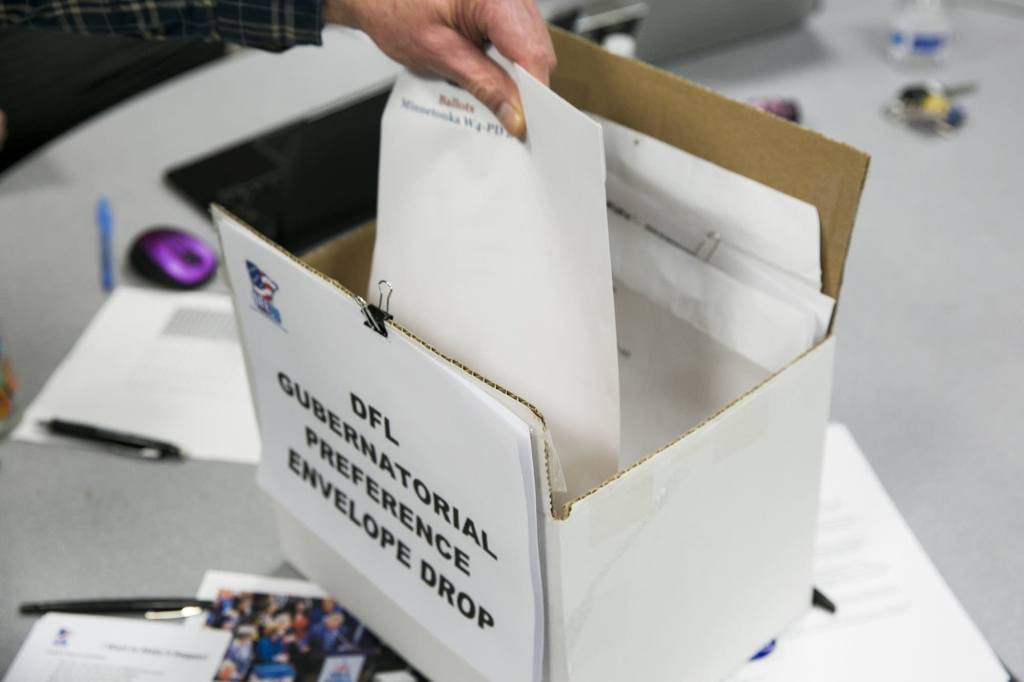 A caucus convener delivers his precinct's votes for gubernatorial candidates during DFL caucuses inside of Eden Prairie Senior High School in February 2018. Next year's precinct caucuses will be held in new districts, as the Legislature and courts prepare to draw new boundaries based on the 2020 census. Evan Frost/MPR News 2018

A court-appointed redistricting panel has begun holding a series of public hearings to gather advice on redrawing political boundaries to reflect 2020 census data.

The first of 10 scheduled hearings was Monday at Woodbury City Hall. The panel is also accepting written testimony.

“This participation is truly democracy in action,” said Appeals Court Judge Louise Bjorkman, the presiding judge of the redistricting panel.

The panel of five judges will establish new redistricting plans if the Legislature and governor cannot reach agreement by the statutory deadline of Feb. 15, 2022. The courts have ended up drawing maps for several decades in Minnesota.

“We intend to give the Legislature every opportunity to complete redistricting, but we also must move forward with our work so that we are prepared to act, if necessary, by Feb. 15,” Bjorkman said.

Residents of several southeast metro communities urged the judges to keep their areas whole during the map boundary drawing. Some said they would prefer to be in a different congressional district.

Connie Sierras of Inver Grove Heights told the judges to draw boundaries that are fair.

“While we don’t have as many of the insanely drawn maps as some other states do, we still can and should do better,” Sierras said.

“There are those who would slice, dice and apportion us out based on political advantage,” Ward said. “I urge your honors not to do this.”

The court consolidated two lawsuits filed earlier this year that challenge the constitutionality of Minnesota’s current legislative and congressional districts based on population changes.

Peter Wattson, a plaintiff in the legal challenge, recently appeared before the Minnesota House Redistricting Committee.

Wattson said that he and other plaintiffs are proposing a “least-change” approach to the new boundaries.

“They will change the current district boundaries, the ones used for the 2020 election, only as necessary to meet the constitutional requirement that their populations be equal,” Wattson said. “The Legislature has authority to get creative in drawing new districts every 10 years. A court does not.”

House and Senate redistricting committees have been holding their own separate hearings to gather public input. Both legislative panels are scheduled to meet again this week, the House committee on Thursday and the Senate panel on Friday.

The U.S. Census data needed to complete redistricting was delayed this year. Time is short with the February deadline. And legislators and candidates are in a holding pattern, waiting to see which district they might end up running in.

Rep. Alice Hausman, DFL-St. Paul, who was first elected in 1989, has been through redistricting several times. Hausman said she thinks next year’s political calendar should be delayed until new maps are ready.

“The party has got to adjust their caucus and convention schedules because they start that before the maps,” Hausman said. “No candidates are going to know what district they’re in, and no delegates will be elected from the right districts.”