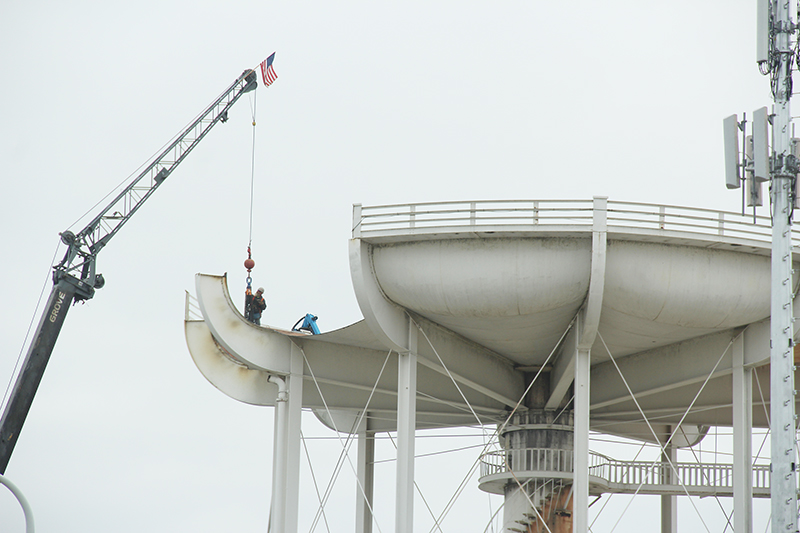 Contractors continue work to take down the downtown water tower this week. The remainder of the tower is expected to be taken down by the end of next week. Sarah Stultz/Albert Lea Tribune

Crews continued working this week to take down the central water tower off of Newton Avenue in downtown Albert Lea.

This week the contractor has been removing the bottom of the tank.

According to an update provided by the city, work was somewhat slowed from the original schedule because of equipment problems and weather.

The contractor believes crews will have the remainder of the tower removed by the end of next week.

Once the tower is down, the contractor for the new tower plans to mobilize and install footings yet this fall, with the hope of returning in the spring to build the new tower.

Here’s an update on other Albert Lea projects:

Freeborn County Engineer and Director of Public Works Phil Wacholz said the schedule for the Bridge Avenue project has slid due to a couple of weather delays and some delays associated with tough soils that are proving difficult to build a road on.

According to the city of Albert Lea, work completed this week included the following:

Installation of a shared user trail south of Goose Creek

Excavation and aggregate base installation south of Glenview Road

Work expected for next week is the following:

Excavation and aggregate base south of Troy Road

This week the contractor completed final grading of the aggregate base. Crews are expected to have the trail repaved by the end of the week.

Next week they will regrade the sideslopes and install the shouldering.

No work was completed this week. The contractor will be digging to fix the collapsed liner between Dane Bay and Botsford Avenue late next week.