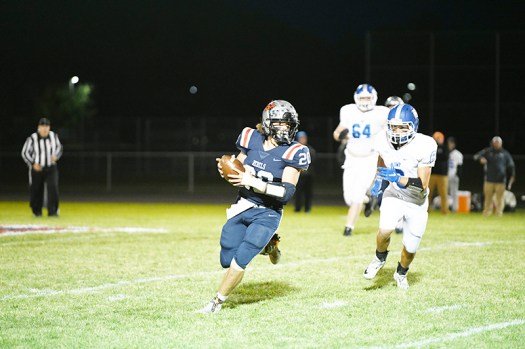 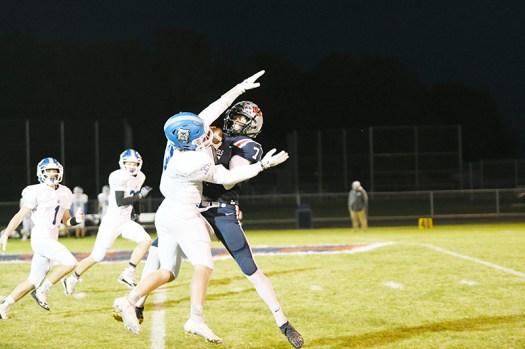 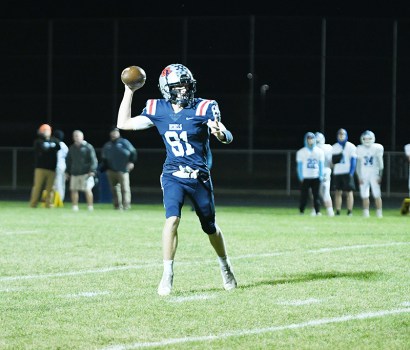 Senior Luke Pederson looks for an open receiver on the fake PAT attempt after the first touchdown of the game. Tyler Julson/Albert Lea Tribune

It was a night of offensive firepower Thursday night when the United South Central football team hosted Janesville-Waldorf-Pemberton.

After a punt on their first possession, the Rebels rallied to score touchdowns on their next five possessions, resulting in a dominating win over the Bulldogs 33-0.

After the opening drive punt, United South Central used quick drives to build up their lead over JWP.

The first score for the Rebels came when junior quarterback Nick Bushlack handed the ball off to senior Colten Quade who marched it in for an eight-yard score.  A fake kick on the conversion attempt led to an 8-0 lead.

The next score was a two-yard pass completion from Bushlack to senior Luke Pederson. The two-point conversion attempt was failed.

In their longest touchdown of the night, Bushlack connected with junior Taylor Conley on a 42-yard completion, putting the Rebels up 20-0 in the second quarter.

Bushlack found Conley again on the next Rebel drive, this time connecting on a 4-yard pitch and catch.

The final scoring drive of the half  had Bushlack completing a 4-yard pass to sophomore Jon Martinez. The Rebels went into the break with a 33-0 lead and were content with draining the clock when they came out in the second half.

Not only was the offense of the Rebels playing well, the defense was also holding their ground, forcing five three-and-out drives and coming away with two interceptions.

The Rebels outgained the Bulldogs 285 yards of offense to just 41. Bushlack accounted for 188 of those yards through the air, also throwing four touchdowns in the process.

The Rebels move to 4-3 this season and will be back on the field Wednesday when they hit the road to take on Lester Prairie in the final game of the regular season.