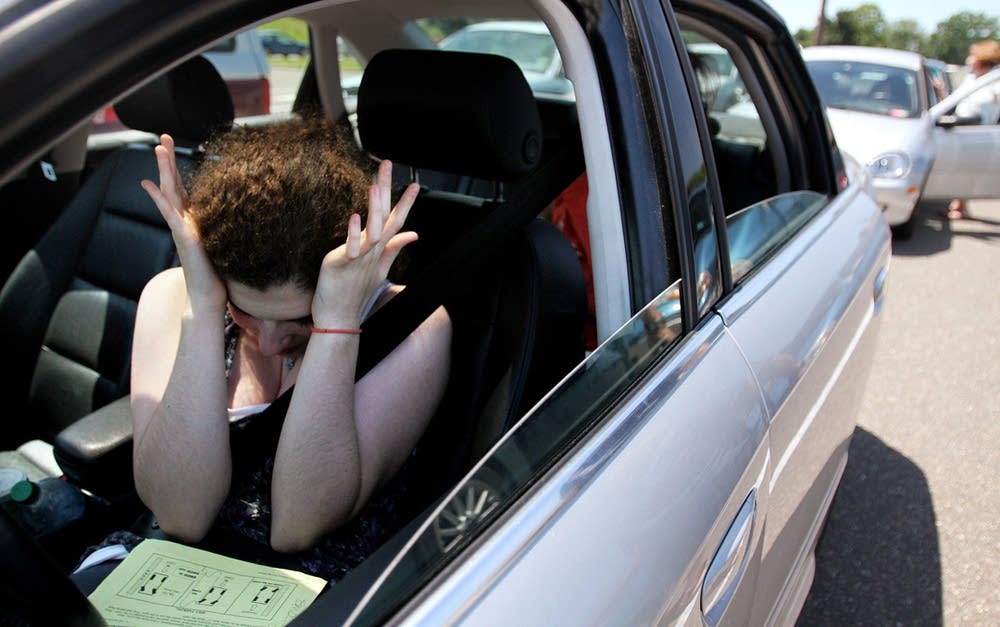 Talia Edelheit tries to calm herself before taking a driver's license road test at the Minnesota Department of Public Safety location in Arden Hills in June 2011. Jeffrey Thompson/MPR News 2011

The Minnesota Department of Public Safety plans to have all remaining driver’s license testing stations opened and operational by the end of January.

The state closed the stations in March 2020 due to the COVID-19 pandemic and canceled 19,000 scheduled exams. A limited number reopened two months later. Currently 26 of the 93 stations are operating, but a backlog continues.

Public Safety Commissioner John Harrington told members of the Senate Transportation Committee during a hearing Friday that the reopening is the top priority for the division of Driver and Vehicle Services.

“We are absolutely committed to getting 100 percent of our exam stations open as soon as possible,” Harrington said.

Legislation passed last session mandated the reopening of all 93 exam stations without a reduction in services.

Pong Xiong, the director of Driver and Vehicle Services, said exam stations will be reopening in phases. He said there will be 32 open by the end of November and 41 by the end of December.

“We’re really dedicated to opening as many exam stations as early as possible,” Xiong said.

Representatives of the trucking industry complained to lawmakers about the pace of the reopening and delays in obtaining a commercial driver’s license.

John Hausladen, president of the Minnesota Trucking Association, said truck drivers are competing against teenagers for testing times. He said a better system is needed at a time of driver shortages.

“Unfortunately, today’s system is not as efficient as it could be,” Hausladen said.

Sen. Scott Newman, R-Hutchinson, the committee chair, urged the division to do more to address the concerns of the public.

“It’s just imperative that we provide better service to them than what we are doing,” Newman said.