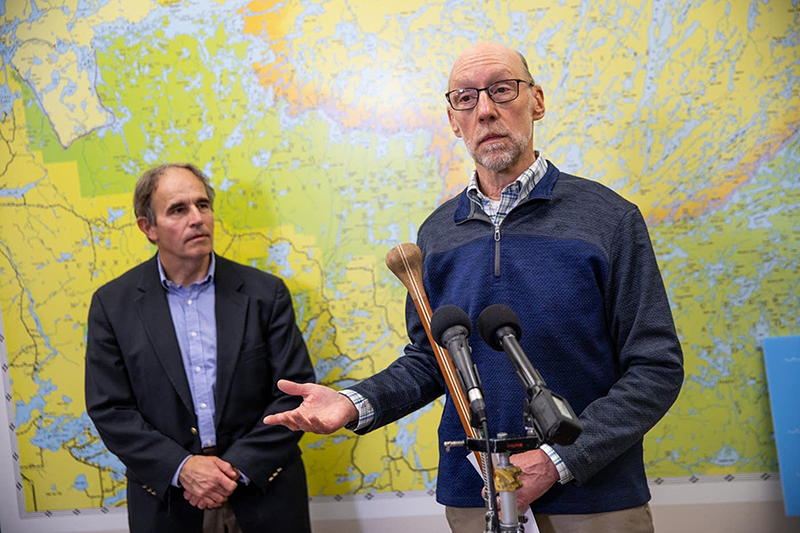 Dave Seaton is co-owner of Hungry Jack Outfitters along the Gunflint Trail, one of several businesses and environmental groups fighting the proposed Twin Metals proposal. He says the health of his business and the local economy is directly tied to the health of the Boundary Waters.

“The Boundary Waters is the goose that lays our golden eggs,” he said. “There’s little doubt that copper mining in this region will kill that goose.”

Seaton says his son wants to take over his business. But he’s concerned about its viability if Twin Metals and other possible copper-nickel mines are allowed to open in the watershed of the Boundary Waters.

Seaton was one of many people celebrating President Joe Biden’s administration’s decision Wednesday to file an application for a “mineral withdrawal” on about 350 square miles of federal land south of the Boundary Waters. That process begins with an environmental study that will freeze all mining activity for two years.

The government will then use that study on the potential impacts of mining to decide whether to ban any new activity within the watershed of the Boundary Waters for 20 years.

Meanwhile, a chorus of business and labor groups are condemning the move from the Biden administration.

Mining supporters say copper and nickel and other minerals underground in northeastern Minnesota are vital to power the green economy that the Biden administration is pushing to transition to.

“You can’t on one hand say there’s a climate crisis and want clean energy and electric vehicles and at the same time attempt to lock out access to those very metals essential to achieve those goals. That’s hypocrisy,” he said.

He says a mineral withdrawal would impact several companies exploring for copper, nickel and other precious metals in the area.

“This is about thousands of jobs and billions of dollars, not just one project.”

Twin Metals is the one project that is furthest along in the area of the proposed mining ban. It’s developing an underground copper-nickel mine proposal near Ely.

But the Trump administration stopped that study before it was finished and returned Twin Metals’ leases. Two years ago, Twin Metals submitted a mine plan that kickstarted a long environmental review and permitting process.

Mining advocates like Brian Hanson, chair of the group Jobs for Minnesotans, say the established process to determine whether mining can be done safely is to evaluate a specific proposal like Twin Metals.

“To instead do a study that isn’t based on a specific plan, it doesn’t make sense,” he said. “We have a specific plan there. Let’s follow the normal process that exists today and look at that plan and decide on that project.”

But mineral withdrawals are also an established process. In 2018, for example, the Trump administration protected a 30,000-acre area in Montana on the edge of Yellowstone National Park from future mining activity.

Becky Rom, national chair of the Campaign to Save the Boundary Waters, says she’s confident Twin Metals will eventually be blocked.

“But what we have before us today is clearly a Biden Harris policy statement — that the Boundary Waters should be protected, hat sulfide or copper mining in the watershed of the Boundary Waters is inappropriate, that this is the wrong place for that kind of activity,” said Rom.

It’s unclear what impact the proposed mining ban would have on Twin Metals since it already holds two federal mineral leases. Rom’s group is one of several challenging those leases in court. The Biden administration has asked for delays in those cases while it determines its position on the legality of the leases.

Meanwhile, the study on the proposed mining moratorium starts Thursday, with a 90-day period for the public to submit comments.