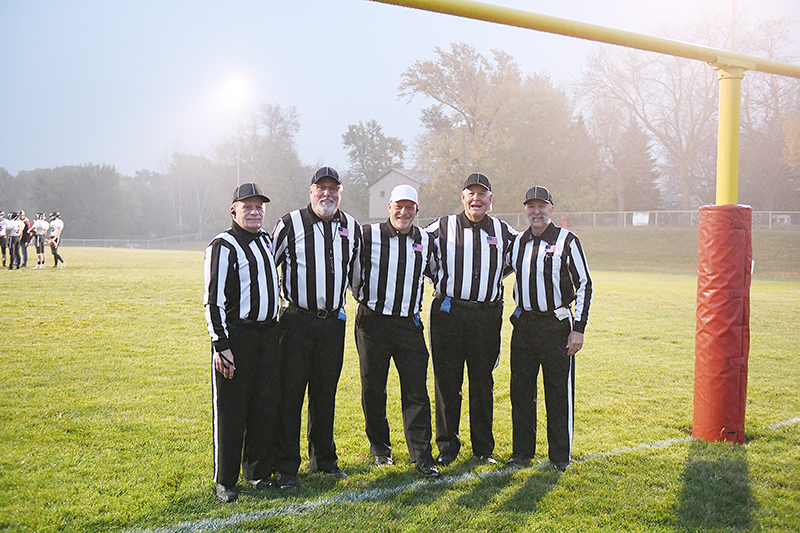 5 retire from officiating with 195 years of experience

Among many other skills and attributes, being a sports official takes a lot of dedication, responsibility, tough skin and passion for the sport at hand.

After a combined 195 years of high school football officiating experience Don Nolander, Dennis Flom, Bob Rinaldi, Al Schallock and Jeff Rayman have all of those qualities in droves. Working on the same crew for roughly 20 years, the group of five called it a career after the football game in Alden Wednesday night, putting on the uniform one last time as a crew.

Over the years, this crew has coached countless regular season games, 22 postseason games and one state championship. They have witnessed some of the very best games  with the best seats in the house, and officiated games with athletes that went onto become stars at the collegiate and professional levels.

However, after all of those special moments and star athletes, the one thing they all said was the best part about it all — the comradery with each other.

Rayman said the group is together on the road every Friday night for the entire season, beginning in late summer and finishing at the onset of winter, ending the season with a chili-feed with one another. Depending on where the assigned game was, the crew could spend multiple hours in the car together every week. That time adds up over numerous years and has formed a brotherhood between this group of officials.

On top of the comradery, they all take pride in  teaching the athletes and being a positive influence on their lives.

“I enjoy being around the young people,” Nolander said. “When you go out and you have a game that’s a real competitive good game, not a lot of penalties,  you get done with one of those and you say ‘That was a lot of fun.’”

“If there’s been good sportsmanship, then we have fun,” Schallock added.

Each member of the crew got into football officiating for their own individual reasons, but they all share a love of the sport.

The group has multiple humorous stories from their experiences over the  years. Whether it was Nolander tripping over the chains multiple times in one play, Flom taking numerous hits from players on the field or Rayman doing laundry in the car on the way to the game, there will be no shortage of good memories for the group to look back on.

With the crew retiring, that leaves five positions open in the officiating field.  All across the state, a shortage of officials has become a rising concern.

Nolander said there are a number of factors that could discourage a potential official from picking up the whistle. A long time commitment, giving up a lot of nights and standing out in the cold fall weather are some of the reasons. But the biggest downfall is the grief taken by unruly and disrespectful fans.

“You take a lot of grief during the game,” Rinaldi said. “Most of the time you hear it and you move on. You just have to concentrate on the next play.”

Nolander said he understands why those potential officials would be disheartened. And Schallock said those types of things make some nights worse than others, but its about moving on to the next play.

Flom said its usually worse on the basketball court because the fans are closer to the action, but Rayman said they can still hear it on the football field.

“Spectators will come right down from the stands and meet us when we’re going into halftime or something and shout about anything. ‘Hey, you blew this call. Hey, you blew that call,’ You’d like to take that guy and put him on the field and see if he can do it any better.”

Rinaldi said there is a good way for anyone interested in becoming an official to get their foot in the door — through mentoring.

“Get on with a crew,” Rinaldi said. “Shadow someone. Do a lot of the JV, the little league games. The more you do that, the more you get acclimated and get better at it. You’ll build your confidence level.”

Now that their varsity officiating careers are over, most of them will take on different roles. Nolander, Flom and Rayman said they might still officiate a lower level game every once in a while, but Rinaldi will trade in his stripes and whistle for a Huskies sweatshirt just in time to watch his grandson suit up for the Owatonna football program.

All five members of the crew wanted to thank their wives for being understanding throughout the years and the seasons. They said being gone from mid afternoon to sometimes 1 a.m. every Friday night takes a lot of patience from their partners.