Keeping glass out of the landfills 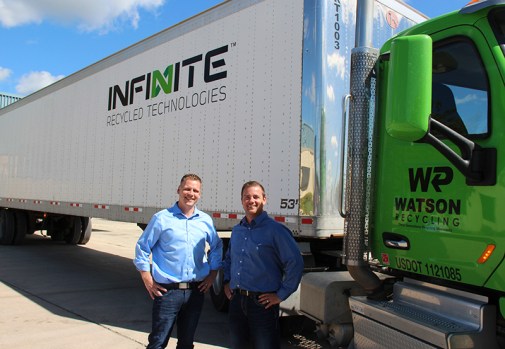 Infinite Recycled Technologies is in the former Bridon Cordage location at 909 E. 16th St. in Albert Lea and recycles laminated and other coated glasses that are otherwise disposed of in landfills. Pictured are company CEO Jeremiah Watson, left, and Patrick Elmore, president of business development. Sarah Stultz/Albert Lea Tribune 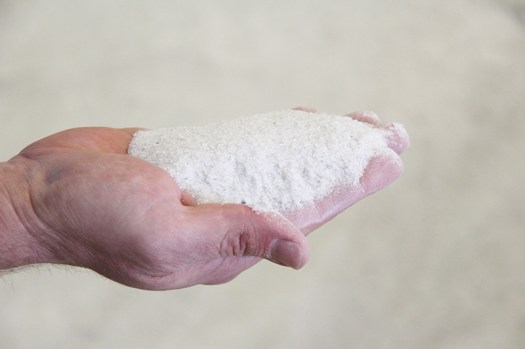 Machines at Infinite Recycled Technologies are able to bread down the recycled glass into two forms. This form, which is like a dust, is used for fiberglass. Sarah Stultz/Albert Lea Tribune 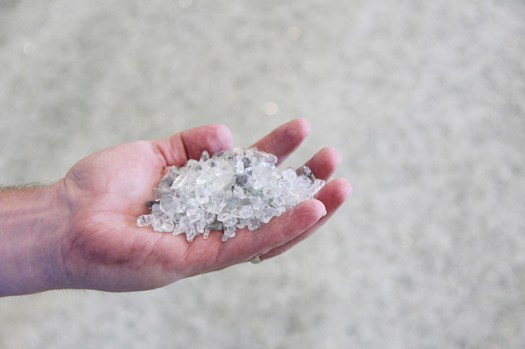 A family-owned business centered around recycling in Rochester has branched out to create a new specialized glass recycling company in Albert Lea.

Jeremiah Watson, CEO of Infinite Recycled Technologies, said the new business is rooted in his family’s generational business, Watson Recycling, that has been in operation for over 100 years.

According to the company’s website, Watson Recycling started in the 1890s when William Watson accepted an appointment by the founders of the Mayo Clinic in Rochester to sort, discard and recycle materials used by their new hospital. The business has since grown to include recycling pickup from restaurants and pubs for glass, paper, aluminum and tin, and expanded to curbside bins around the area. There are now multiple processing centers in Rochester and Austin.

Watson said Infinite Recycled Technologies began with some of their customers that make windows with laminated glass who wanted to see if there was a way to stop putting their waste glass into landfills.

He said they searched “high and low” across the country and there was no one they could find that did it, so they spent two years with an engineering team and with extensive development of equipment to come up with a process that can separate large architectural sheets of glass from plastic.

After developing the equipment, they formed Infinite Recycled Technologies in 2019 and initially started at a building in Austin before outgrowing that in a matter of a month.

They began a search for a new building and came across the former Bridon Cordage building in Albert Lea, working with the city of Albert Lea and the Albert Lea Economic Development Agency to get the business started in the community.

They said they needed open warehouse space and also liked the rail access available at the site.

Watson said when the waste glass is processed, it is broken down into different sizes, depending on the end consumer — anything ranging from a dust to small pebble size. The recycled glass can be used for things such as fiber glass, reflective road striping, abrasives for sand blasting or be made back into new glass products. The plastic can also be reused in things such as carpet backing and adhesives, to name a few.

“Our goal is to have all parts of the panel we wanted to recycle it,” he said. “We didn’t want to end up landfilling it, and so far that’s what we’ve been able to do.”

The separated product is loaded into rail cars, some of which goes as far away as northern California and the East Coast, said Patrick Elmore, president of business development.

Watson and Elmore said the companies that bring their glass to Infinite Recycled Technologies have been pleased to have a means to recycle their wasted glass, and it is economical for them compared to some of the landfill fees they were paying.

“Every pound of glass that we get through here … was previously going into a landfill before we opened this facility,” Watson said. “The environmental benefits that brings, to Albert Lea, too, but really to — we work with customers in three or four different states right now, and they are so thrilled to recycle instead of having to take that material and bury it in a landfill.

“It’s not often you get to be part of a business where people are just grateful to be able to do business with you. This is one of those businesses that is just really awesome.”

Elmore said one of their customers is one of the largest glass manufacturers in the United States, and they had been searching for 20 years to be able to find a way to recycle the glass.

The men said they have been pleased with the welcome they have received in Albert Lea — not only from the city and ALEDA but the power company and a local staffing company, too, that helped them find their employees. They said their 25 to 26 employees that they have are the company’s biggest benefit.