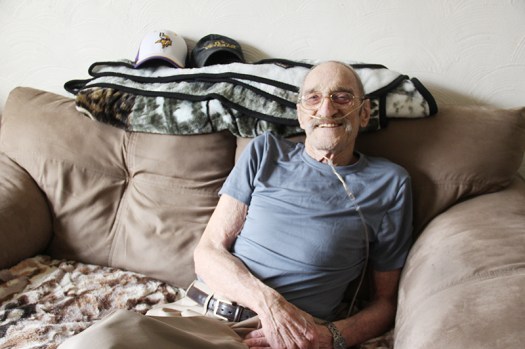 Roger Schaefer of Albert Lea, a Mayo Clinic Health System Hospice patient, will have his artwork on display at the Freeborn County Arts Initiative. Schaefer said he has loved painting since he was a youth and never thought he would be able to have his own gallery show. Sarah Stultz/Albert Lea Tribune 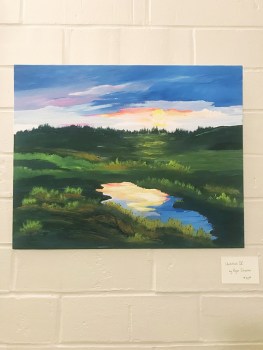 One of Roger Schaefer's paintings on display at the Freeborn County Arts Initiative, features a sunset reflecting in a creek. Schaefer said he enjoys painting landscapes and nature scenes and drew inspiration for many of his paintings when he lived in Arizona. Provided 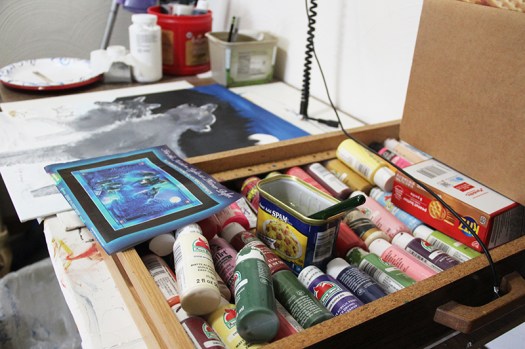 Roger Schaefer has a table set up for painting in his apartment. He is currently working on a painting with wolves and the Northern Lights. 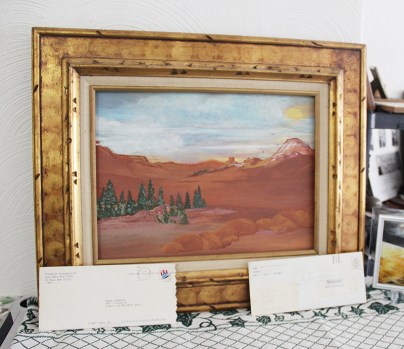 In addition to the dozen pieces of art on display at the Freeborn County Arts Initiative, Roger Schaefer has many other pieces he has created in his apartment. He hopes to sell or give many of them away. Sarah Stultz/Albert Lea Tribune

A partnership between the Freeborn County Arts Initiative and Mayo Clinic Health System Hospice is helping an Albert Lea resident fulfill a longtime dream of showcasing his artwork.

Roger Schaefer, who suffers from COPD and lung cancer, said he has been interested in art since he was 12 years old.

He said he grew up in Adams, and got interested in art after his mother one day told him to make a picture of the Catholic church there.

“I did it, and she liked it, and it got the ball rolling,” he said.

He painted in his youth and then picked up the hobby again after his military service in the 1960s.

He particularly enjoys painting mountain and desert scenes from his time living in Arizona. Schaefer, who retired from Wilson & Co. in 1990, said painting has given him an outlet to handle the challenges in his life — that and “praying to the good Lord.”

It provides him with relaxation and concentration, he said.

Though he has been painting for some time, the idea for an exhibition came after a visit by Emma Evans-Peck, a music therapist with the hospice program at the health system in Albert Lea and Austin, who is also a board member for the Arts Initiative in downtown Albert Lea. She said she noticed all of Schaefer’s art and brought up the idea of showcasing it.

“Part of our goal in hospice is to help people live to their fullest, and sometimes help them reach their goals in their lives,” Evans-Peck said. “In this case I thought helping out with doing an art show would be a great legacy for him and his family and something that would really help him get his art out there.”

Evans-Peck brought the idea up to others with the Arts Initiative and then worked with a hospice social worker to make it a reality.

“It’s such an amazing thing for Roger to have his artwork out there — to help his family and loved ones have part of his legacy, and also to help people realize that hospice isn’t just about the last few days or hours of life. It’s about bringing quality to people’s lives,” she said.

Instead of waiting for what would have likely been over a year to be able to have his show in a gallery in the building, the Arts Initiative decided to instead move forward with displaying a dozen pieces in the hallway of the building.

“I was so excited …,” Schaefer said. “Nothing like this has ever happened to me in my lifetime. I was really happy that my name could get out there and show some of my art.”

Susanne Crane with the Arts Initiative said the arts organization is honored to host the exhibition at this time to fulfill the wish of a local artist such as Schaefer.

“It makes us happy to be able to help out and glad to be here,” Crane said.

The Freeborn County Arts Initiative, at 224 S. Broadway, is open from 5 to 8 p.m. Thursdays and Fridays and from 1 to 4 p.m. Saturdays.

An artist’s reception will be held from 2 to 4 p.m. Saturday, in which people are invited to meet Schaefer, enjoy hors d’oeuvres and celebrate his art.

The exhibition will be open through Nov. 6 and is free to attend. Masks will be required.

Schaefer’s artwork will be for sale throughout the show, and questions can be directed to info@fcai.us.

Schaefer said in addition to the paintings that will be on display at the Arts Initiative, he has about 100 other paintings he would like to see be given to good homes.

People who would like to look at his other paintings and potentially purchase them can do so by appointment by calling 641-590-4208.

He said he has already given out between 75 and 100 other paintings to relatives at a family reunion in August and hopes he can find homes for the remaining ones.

Despite his health challenges, Schaefer said he lives a happy life in his apartment.

“Hospice has really been good to me,” he said. “They’re like angels on earth.”