A Kansas City man was taken into custody Thursday afternoon after attempting to steal rechargeable debit cards from Walgreens in Albert Lea and leading police on a chase. 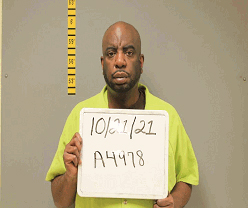 According to a press release from the Albert Lea Police Department, Devon Henry Smith, 45, was arrested and transported to Freeborn County Adult Detention Center on charges of fleeing in a motor vehicle and felony theft.

Police stated at 2:22 p.m. Thursday Smith allegedly reloaded multiple rechargeable debit cards. Once the cards were updated, he reportedly left the store without payment in a black SUV. A Walgreens employee then attempted to retrieve the cards through an open door. The employee entered the vehicle rather than being struck as it backed away.

The employee rode in the vehicle for several blocks before the suspect brought the employee back to the store and pleaded with her to leave the vehicle, which she did.

An Albert Lea detective was responding to the scene and located the vehicle as it was leaving the parking lot for the second time. The detective tried to stop the vehicle and a pursuit ensued. Speeds reached up to 45 mph before the vehicle stopped at the intersection of East Front Street and South Broadway Avenue.

Smith was taken into custody without further incident.