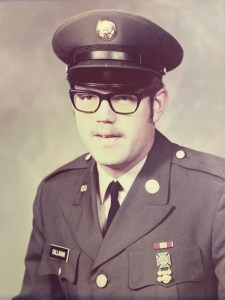 Mark was born December 28, 1951 at Naeve Hospital in Albert Lea. He died on October 6, 2021 at his home in Albert Lea at the age of 69 after suffering for several months from cancer. His parents were Robert F. Callahan and Hazel B. (Andersen) Doyle. Mark grew up on a farm in rural Albert Lea. He was baptized and confirmed at St. Theodore Catholic Church and attended schools in Albert Lea.

He enlisted in the U.S. Army and served from 1972 to 1975. He served his basic training at Fort Leonard Wood, Missouri and spent two years with the 7th Army 595th Transportation Co. at Camp Hunter-Ligget in California as a Heavy Equipment Transport Driver. The last year of his active service was spent in Spinelli Barracks, Mannheim, Germany also as a Heavy Equipment Transport Driver. Upon his discharge from the service, he returned to Albert Lea where he worked at several jobs, including over-the-road semi truckdriver, welder, farming with Al McGill, and working for Wangen Excavating. Coke enjoyed motorcycle riding, collecting caps and restoring a vintage Oliver tractor, which he displayed at the Freeborn County Fair for a number of years.

Coke was preceded in death by his parents, brother David Callahan and numerous aunts and uncles.

In lieu of flowers, Memorials may be sent to the Albert Lea American Legion Post 56 or donor’s choice.