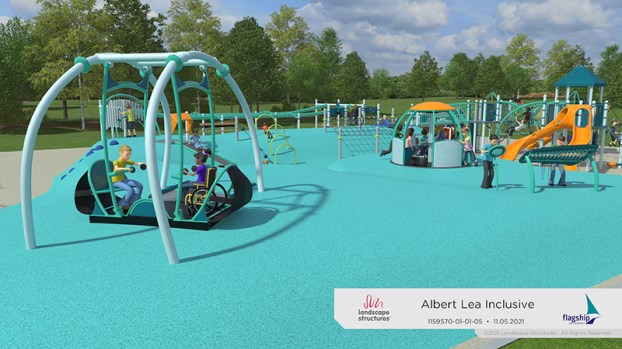 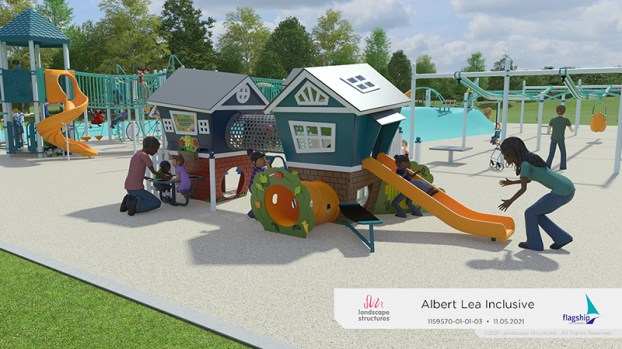 The playground is designed not only for individuals with a physical disability, but also those with autism and other sensory disorders. Provided 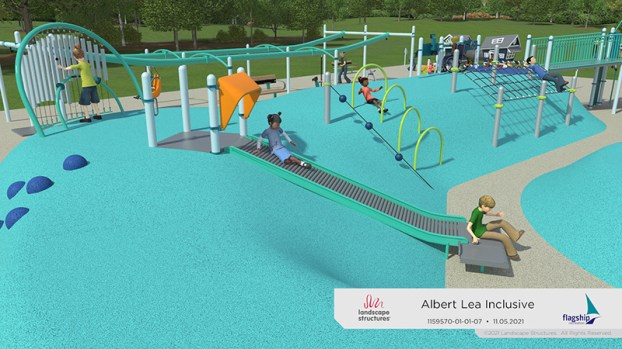 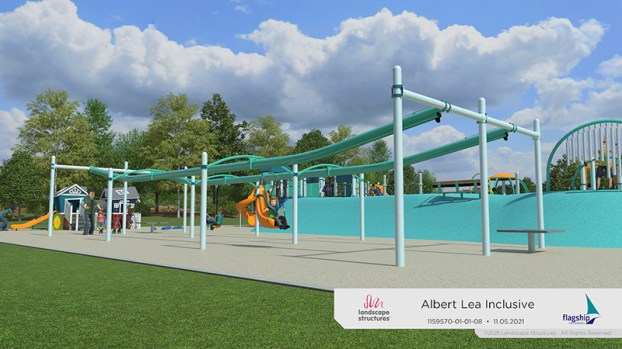 The Albert Lea City Council heard a presentation Monday night from a community-led group about plans to construct an inclusive playground at an area park within Albert Lea.

Led by community members Sarah Stultz and Kara Paulson, the presentation laid out possible locations for the park, as well as total costs and ways to fund the project.

“The common goal is to have a place in southern Minnesota to interact, play, collaborate, share ideas and resources and for everyone to just come together,” Paulson said. “We hope that the playground can bring more positive interactions between community members in Albert Lea and the surrounding areas, and where multigenerational families can learn and play together.”

The committee behind the project is made up of parents of special needs children, as well as special education teachers, therapists and recreation staff.

According to the presentation, an inclusive playground is a space that allows everyone, regardless of ability, a chance to play. They are designed not only for individuals with physical disabilities, but also those with autism and other sensory disorders.

“I think this is a great idea,” said Albert Lea Mayor Vern Rasmussen Jr. “It’s something we do need in our community, and I think there is an ample population that would utilize a park of this sort. I think it’s definitely something we should be looking at.”

Paulson said Albert Lea Area Schools has over 20% of its students enrolled in special education services and NRHEG had 32%.

The committee also took their idea to the Albert Lea Parks and Recreation advisory board, where they received unanimous approval for the concept of the inclusive playground.

The total cost of the project is estimated at $710,000, not including any extra tiling, or facilities upgrades that might need to be made: $219,000 for the pouring of the surfacing, $326,000 for the equipment itself and $135,000 for the installation of equipment and the construction of the container with drainage and border.

Funding for the project could come from a DNR grant that could provide $250,000, in-kind work for the installation of equipment and construction of the container, donations from businesses and service clubs, fundraising and selling of the equipment, meaning businesses or individuals could buy a piece of playground equipment and have their names printed on them.

The playground and play area is approximately 13,000 square feet and could grow with a possible addition of a Miracle Field in the future.

In determining possible locations for the inclusive park, the committee looked at a number of factors, including ease of access, safety for parking, sidewalks, water and traffic, comfort from other noises and smells, ADA compliant amenities, flood zones, ample space for the playground and field, city owned and where existing park equipment is slated to be replaced.

The committee named two possible locations for the inclusive park in its presentation, Troy Hammer Park and Edgewater Park north of the Bay Pavillion.

The pros of Troy-Hammer Park included the quiet location and proximity to the school district, ease of access from Interstate 90, the large amount of trees for shade and the park is on the list for future upgrades. However, the committee said the park does not have a parking lot or walkways, the bathrooms would need to be updated and Hammer Road is high traffic. The committee would opt to have children and guardians enter on the south end of the park instead of the north side.

For Edgewater Park, the pros included being a well-known destination, having an existing parking lot and bathrooms, easy access to from Interstate 90 and an empty grassy area for a new playground design and planting of trees. The cons included adding an extra $50,000 for the land to be tiled, the pavilion is rented most weekends with various events and there are no existing trees.

City Councilor Larry Baker liked the idea of putting the inclusive playground at Troy-Hammer Park, but agreed that parking could be an issue.

“Troy-Hammer is really a nice park,” Baker said. “It would be a really nice location. But as far as the cons on it, the one thing that I see is the no parking … It’s a beautiful park. It’s nice and quiet and it’s huge. (Parking) would be my one concern.”

Baker also said he didn’t think traffic on Hammer Road would be too much of a problem because the park would be far enough away from the road.

Rasmussen said the side of the park opposite Hammer Road could also be utilized for a potential parking lot and walkways.

“As a board, I think this is something we could find value for our community in,” Rasmussen said. “I think it would be a big attraction.”

Baker also questioned whether the committee had considered Morin Park and said some of the existing facilities there could be reworked.

Howland questioned whether it would be in a flood zone.

The committee will work with city staff to narrow down a location and come back to a future council meeting.